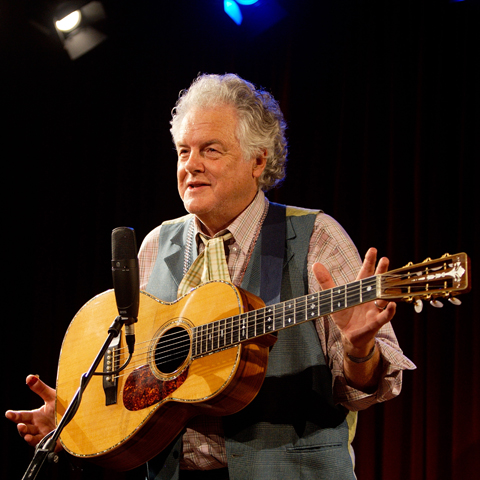 “Were trying to reach people’s hearts, and bluegrass is one of the direct lines,” said Peter Rowan, during a recent interview with The Marquee, just days before he was due back in Telluride for the 41st annual Telluride Bluegrass Festival.

Rowan was heading to the famed festival to perform with his electric band Twang n Groove, but when he touches down in Colorado this month it will be with his all-acoustic, traditional bluegrass band. The legendary bluegrass musician, who made his mark in the sixties as one of Bill Monroe’s Bluegrass Boys has a biography that spans multiple pages, as Rowan is continually creating new projects and stretching his comfort zone. In addition to performing as a solo artist he has five other bands going, from the aforementioned Twang n Groove, to Crucial Reggae, his Big Twang Theory, and his electric four piece The Free Mexican Airforce.

“When I come back to RockyGrass, I’m bringing my full bluegrass band and we’re gonna burn it down. When you play bluegrass you’ve got to go all the way, and that’s what we’re going to do,” Rowan said. “I have guys in this band that I can say ‘take it’ and they take it. Not since Old & In The Way have I had a five-piece like that. You know, there’s this concept that if you arrange everything, like the Deadly Gentlemen, then you have an act, you have a show. But if you follow the sort of homegrown rules of the old school then you have music — pure music.”

At 71 years old, after more than a half-century of touring and playing bluegrass, Rowan still gets downright excitable when talking about the foundation of music that he formed so many years ago playing with Bill Monroe. “Bill said when he got to it, the music would emerge and he called it the ‘ancient tone.’ And that’s my goal is to immerse myself in the parameters of the old school and let the elaborations be in the tone that comes out — and of course the notes too, but the ancient tones aren’t about a bunch of notes, it’s about select notes.”

In 2013 Rowan’s dedication to tradition was cemented with his Compass Records release The Old School, which much of his set will center on during RockyGrass. Rowan explained that he covers some of the same material in both his electric and acoustic bands, but that playing the songs with different instrumentation can take them to places he never imagined when he wrote them. “For a song like ‘Land of the Navajo,’ it got to the point where it was too jolly, too much of a two-beat and became kind of pseudo country. In my electric band my drummer Jamie Oldaker, who played with Eric Clapton on ‘Lay Down Sally,’ played it way-way down in the groove, almost like half-time. And it just gave the song new life and an even more believable point of view than this just balladier approach to playing a two beat. But it helped the bluegrass way of playing it too. It was refreshed,” he said.

As a practicing Buddhist, Rowan has a knack for finding the zen to nearly everything he does, but his ability to do so in musical realms, not surprisingly, seems almost effortless. Early on, during his time with Monroe, Rowan learned to flow with the changes of music, be it in a particular song or throughout an entire set. “When you play for 40 minutes or an hour, you may start out kind of crisp and everything is zipping along, but then you get down to things like the slower numbers like ‘In the Pines,’ and that’s what I’m in it for — waiting for those musical and kind of hauntingly beautiful tones to emerge. Bill called them the keening tones, that mournful sound, and it transcends that too. That’s what gets me off is the haunted part of it,” he said, adding, “After, all bluegrass music is the most spiritually uplifting music.”

• Bill Monroe and his Bluegrass Boys