Trending Stories from The Marquee
You are at:Home»Joe Kovack»REVIEW: Man or Astro-Man? at Larimer Lounge 7/19/14
By Marquee Magazine on July 20, 2014 Joe Kovack, Reviews 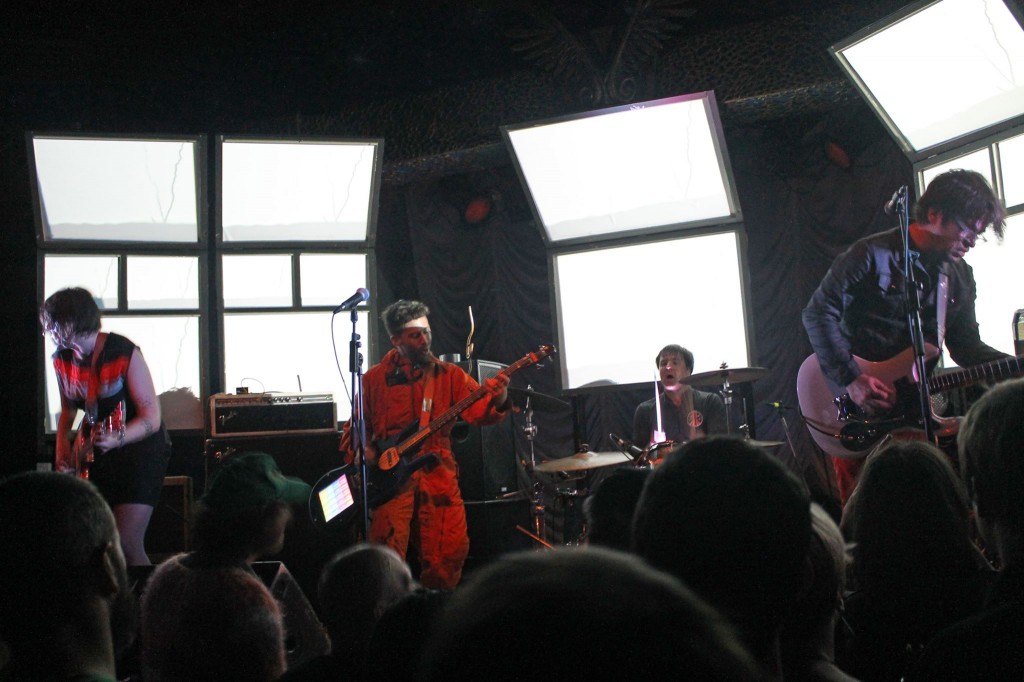 It was a hot July night for Man or Astro-Man?, Sallie Fold, and Wray at Larimer Lounge Saturday night. Small, dark, and musty are adjectives not generally associated with positive things, but when it refers to a rock club that brings great live acts—from up-and-coming indie bands to cult classics that have been killing the music scene for decades—they are characteristics which enhance the music experience. Any true rock fan will tell you that.

The club’s small stature does nothing to take away from the feel and the sound of the shows they bring, and Wray, the first opener, showcased this from the start. A three-piece from Birmingham, AL, Wray brought a stripped-down, pop-psychedelic fuzz to the show. Accentuated by iconic, swirling 1960s lights, the band played a solid 30-minute set from their debut album released less than a week prior. The vocals were subdued, and the songs were a little repetitious to start, but opened up at the ends when the band would let their instruments swim free. Wray showed potential for a new band and set the atmosphere for the night off right.

By the time Sallie Ford hit the stage the crowd started filling the club. The Portland-based Ford and her all female cast have been making a name for themselves with their own brand of blues-fueled, rockabilly-tinged music. You won’t be awestruck by any fancy light show or extreme stage presence, but their straight-forward rock and roll is infectious in its simplicity.

The venue was filled by the time Man or Astro-Man? hit the stage a quarter past 11. The heat began to make its presence known, but it was of little consequence as the show to come would distract from any temperature-related issues. Screens of various sizes filled the background of the small stage showing various images and video from generic, green-text hacker screens to clips of vintage sci-fi movies. Their stage setup was simple, and no spacesuits were worn, but their set was fast and heavy, highlighting Man or Astro-Man?’s explosive, psychedelic-infused surf rock, which has been their signature for 23 years. On tour to support their latest release Defcon 5…4…3…2…1, they played a healthy mix of old and new, with the set intense and driving from the start. A few minor hiccups involving duck taped mic stands and equipment interrupted the set briefly, but enabled the band to display their signature brand of goofy, sarcastic humor, something fans know well. And new songs “Anitmatter Man” and “Communication Breakdown, Pt. II” featured vocals from a band that normally let their instruments speak for themselves. By the end of the hour-long set the crowd was sweaty, even those of us not in the pit or crowd-surfing, and fully charged from a blistering array of heavy, psych/surf guitar. Man or Astro-Man? may have been touring for 23 years, but they still put on a hell of a rock show, and seeing them at the intimate Larimer Lounge was a treat.