Trending Stories from The Marquee
You are at:Home»Brian F. Johnson»Rival Sons Pay Homage to Their Heroes by Writing Rock by the Code of the Samurai
By Marquee Magazine on July 1, 2014 Brian F. Johnson, Cover Story, Features, Interviews 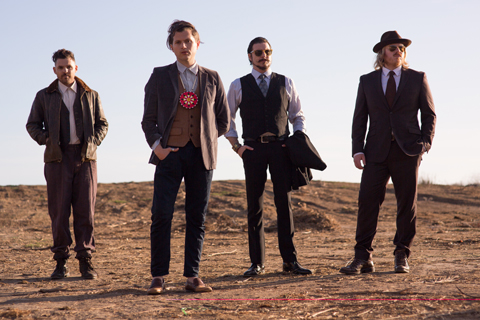 Europe is absolutely salivating over Rival Sons’ latest release Great Western Valkyrie. The album is number 1 on the UK Top 40 Rock Albums chart, among its appearances on other charts, and the media is beside themselves with praise. Classic Rock Magazine called the album “fucking epic” and gave it a perfect 10 out of 10 review. The Guardian said “It’s time to meet your new favorite band,” and Kerrang wrote “They craft near-perfect garage-rock songs.”

Decades ago Rival Sons would have been classified as “arena rock” but those bands don’t exist much anymore — not in the States, anyway. So despite chart-topping success and media crushes overseas, Rival Sons are still wondering where the love is in their home country of the United States.

“We don’t play over there without it being sold out, and we’re not the only ones,” said guitarist Scott Holiday during a recent interview with The Marquee. “But the rock and roll crest over there is stronger and it’s more popular and relevant to their culture. There are all of the magazines, NME, Q, MOJO, Classic Rock over there, you know a bigger print thing happening and satellite radio is more prevalent. They have a whole thing happening that seems to be percolating — and people go to shows!”

The Long Beach, California-based Rival Sons play a saucey mix of rock and roll, soul and blues that pays obvious homage to their influences. The group formed in 2009 after Holiday’s previous act Black Summer Crush disbanded, and soon thereafter he met blues vocalist Jay Buchanan, who hadn’t sung rock and roll up to that point, and encouraged him to try it. Buchanan’s hugely powerful, soaring voice, coupled with Holiday’s heavy, big riff guitar work blended perfectly to form their classic rock sound. But Holiday pointed out that they didn’t necessarily set out to try to create that style of rock. “The whole time we never had a feeling that we were attempting to be retro or classic rock. We’re making rock and roll,” Holiday said. “I think our influences are very soul based and blues based and very common to the heroes that we’re compared to. They’re our heroes and we wear that on our sleeves and we do what all bands and musicians do and what all artists do, we echo our heroes and the people who shaped and inspired us.”

For their newest album, Holiday explained that the band took their time in comparison to albums they’ve made in the past. But he also explained that the group doesn’t spend a lot of time preparing their material for the studio. “We don’t write on the road, or road test anything. Our way of doing things up to this point is that we won’t even share stuff ahead of time. Jay or I write stuff and then we unleash it once everyone is mic’d up and the red light is on. That way you’re hearing the first or second or fifth take at the most.”

Holiday said that in his personal music explorations he’s revisited classics that captivated him and found that many were done in only a few takes. “When I went back and learned why so many of those recordings tickled me I found that it was because they hardly knew the song yet,” he said, referring to a laundry list of artists that included groups from The Beatles to Ike and Tina Turner. “With any art you want to capture the spark of inspiration. It’s like a wonderful painting. How many versions of that wonderful painting will remain wonderful before it becomes tasteless and bland and you’ve taken all the life from it because you recreated the same fucking painting, when the spark was there on the first version you did?”

Both Buchanan and Holiday and the whole of the Rival Sons believe that good rock and roll can easily be over-thought. Buchanan has said before that he and Holiday write music in the Samurai code which dictates any decision must be made in the time it takes to complete three to five breaths. On their last album, for example, Buchanan had re-written one of Holiday’s acoustic songs. Completely unrehearsed, without even hearing Buchanan’s idea, Holiday told his bandmate that he’d just follow him on the new arrangement. They recorded two takes of the track and kept the first take. It was the first time the song had ever been played that way.

This album took a bit longer than that hole-in-one, mostly because they didn’t need to immediately get back on the road, but also because they recorded more songs than they needed. Holiday said that they were so excited to get back into the studio that they ended up writing 19 songs in total and then scaling it down to fit the album. He said he’s ecstatic about the new direction the band is taking, which includes a personnel change as Dave Beste takes over bass from Robin Everhart. Great Western Valkyrie, said Holiday, is just another chapter in the longer tale of Rival Songs. “If you think about it you’re writing one continual book or saga. We’re done with Empire Strikes Back and it’s time to go on to Jedi,” he said.