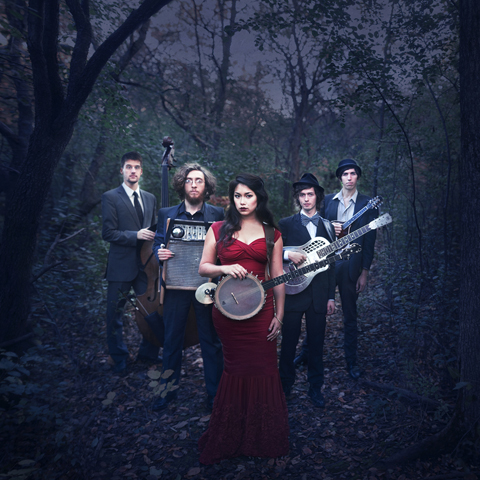 It all started with prohibition. In 2011 when reports came in about varying alcohol content in Kombucha tea, the fermented beverage was pulled from store shelves in Michigan as well as in other areas of the country. That event couldn’t have seemed further away from the Michigan music scene, but as it turned out, that single action by the FDA ended up creating a band.

“We like to say that the band formed out of the great Kombucha prohibition and the Kombucha speakeasies of 2011,” laughed guitarist/vocalist Andrew Brown  of The Appleseed Collective, during a recent interview with The Marquee. “When the FDA pulled it off the shelves, all our friends in Ann Arbor were brewing their own Kombucha for this big party, tThe Kombucha Speakeasy, and that was one of the very first gigs we played together.”

Not long before that first gig, Brown and mandolinist/violinist/ vocalist Brandon Smith had crossed paths and as Brown put it, that meeting was the “catalyst for the creation of this project.”

Brown had visited New Orleans shortly before he and Smith met, and he credits that trip with the inspiration and direction for what he wanted to create. “I didn’t know exactly what I wanted to do in music, but I had a pretty good idea of the aesthetic. I knew I wanted an acoustic New Orleans feel, and my relationship with swing music really started there watching street musicians and friends playing. When I got back home to Michigan, I still didn’t know what I wanted, but I knew I wanted  to do something like that,” he said.

A few years and now two full-length releases later, Brown and Smith, along with banjoist/vocalist Katie Lee, washboard/ percussionist/vocalist Vince Russo and bassist Ben Rolston, have solidifed the lineup and dialed in an Americana sound that blends musical traditions from all over the world, and from the last 100 years of recorded music — mostly focused in pre-WWII styles, but also willing to throw in a cover of Dead Prez’s “Hell Yeah (Pimp The System).”

“We didn’t set out saying that we wanted to sound like The Squirrel Nut Zippers with some Tom Waits-ian songwriting and a dash of Punch Brothers thrown in. It just sort of happened when our musical influences of contemporary and old artists just kind of came together — and it’s still developing,” he said.

Brown explained that for the group’s latest release Young Love they took what they put down on their 2012 release Baby to Beast and expanded on the musical themes. “At this point we’ve been gigging and playing a lot, so things were a little more polished on that end, but we did some stuff on this album with transitions, which we do in our live show, and just got the songs flowing into each other,” he said.

The Appleseed Collective recorded Young Love in the home of their banjo player’s mother in late spring of 2013, and released it earlier this year. “We really liked the sound of one room at her home. My brother is a recording engineer and he brought in everything we needed to set up an entire studio and we spent 10 days with the whole band living in the house tracking it all live. It was great. We felt like we went into another capsule of life that was totally separate from real life and emerged out on the other side with an album,” Brown said.

The 14-track album technically has 12 songs, with one track acting as an intro and another track forming a segue. Brown wrote seven of the tracks, while Lee penned three and Smith contriubted another two. But while Brown may have the lion’s share of the songwriting credits, he admitted that he had a few “gift” songs on this album. “Some of the songs came to me pretty much right out of the ether; plucked right out of the air. I had this idea, and I sat down and wrote it, where for other songs I sat down and rendered it, like a scupltor renders something out of clay,” he said.

While the band’s sound is firmly rooted in the past, Brown and his bandmates aren’t under some illusion that they’re living in times gone by, and Brown said that it gives them the freedom to play with their music in ways their musical forefathers didn’t have the opportunity to do. “My goal is to encapsulate musical ideas that are more turn of the century, pre-WWII-type stuff and bring it into a more modern feel with the lyrics or poetry that goes into the songwriting. I also like to blend the traditional stuff with some things that wouldn’t have really happened with that style of music — take that old timey stuff and jostle it up a little bit.”