Trending Stories from The Marquee
You are at:Home»Festival Coverage»THE ROAD TO ARISE: A conversation with Everyone Orchestra’s Matt Butler
By Marquee Magazine on July 22, 2014 Festival Coverage, Interviews 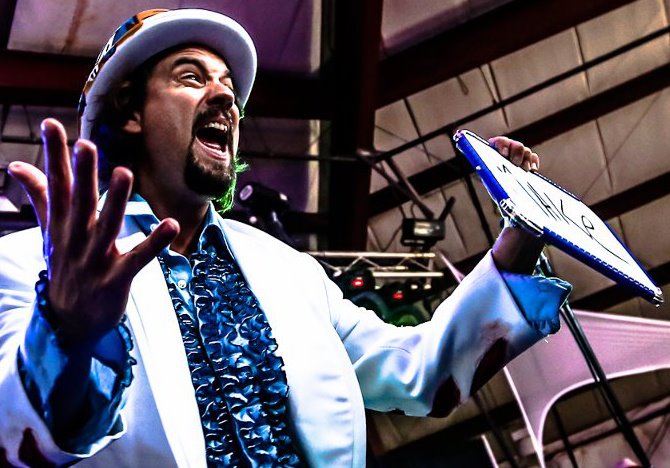 The Bay Area of California, and its surrounding hill, canyons, and valleys, have always been a hotbed of new thought. Especially musically. And especially when it comes to jam bands. Before there was ever such a term, there was The Grateful Dead; the band that changed everything. Then in the early to mid-1990’s, bands spawning from the Grateful Dead sound started a scene, and the improvisational heavy genre gained footing, and wandered festivals around the country. Drummer Matt Butler was in a band called Jambay at this pivotal time, and Butler soon brought everyone in the scene together at open mic’s and jams, looking to create music for and by a community, and the Everyone Orchestra was born. Butler has shaped the Everyone Orchestra over nearly two decades, and also evolved with it, but the groups’ purpose has never changed. Butler has always just wanted to get good people together and jam, and although his role was originally behind the drum kit with Everyone Orchestra, it eventually evolved into what we see now…the role of the energetic, arm flailing, smile radiating, dance inducing, magic moment creating, baton wielding, dry-erase board using, fashion with flare wearing conductor of the force that is the Everyone Orchestra. Butler will be bouncing and pointing on the stage at ARISE, as he conducts the Everyone Orchestra, and conducts the energy between the musicians, and the crowd. I had the pleasure of chatting with Butler while he was at home in Oregon, and he filled me in on the evolution of EO, and what he has in store for us at ARISE.

MB: Well, I am a drummer. That is my primary instrument. I played in a jam band called Jambay in the 90’s, and toured relentlessly for about six or seven years. Over that time I met, and played with, some of the biggest names in the jamband scene now. Guys from The String Cheese Incident, Phish, ALO, Steve Kimock. Jambay was around when the whole “scene” was really starting. Those connections gave me the foundation and connections to start Everyone Orchestra whe I came up with the idea. I was asking these musicians to do something very different. When Jambay broke up, I explored a lot of different musical avenues; I recorded and composed a couple records, and I tried the singer song-writer thing. I describe the Everyone Orchestra as my singer-songwriter phase gone awry.  I started experiment ng with group improvisation, and group interaction, via drum circles and large jams. I also starting hosting open mic’s. Eventually Everyone Orchestra evolved.

BT: Was this all in Oregon, where you live now?

MB: When I was starting the Everyone Orchestra concept, I was living in Marin, California, just west of Fairfax. Jambay started in San Diego, lived in Seattle, and landed in San Francisco. We were a total West Coast phenomenon.

BT: The northern Californina setting is a big start of the story. You were there when the jamband scene was just being “formed, and when it was blowing up.

MB: Definitely. There was a time when I was playing drums in ALO, and ALO was also backing me up on EO stuff. We would have these big jams, and include all the creative beings that were living in the valley there. Those events turned into what EO is now. I was the main instigator and facilitator for a lot of those big bands. The Everyone Orchestra was not something that came about overnight.

BT: How did you incorporate the conducting?

MB: I grew up in a very orchestral oriented household. My mother actually played in the Eugene Symphony for forty-eight years, and just retired. We had a lot of conducters that would come to dinner, or even live with us at times. Marin Alsop, who is the principle conductor for the Baltimore Symphony, and is world renowned at his point, lived with our family off and on, when she was the principle conductor for the Eugene Symphony. She had multiple principle conductorships at that point. Some might best know her for the work she has done with Trey Anastasio from Phish. I was definitely influenced by the role of the conductor, and I did play orchestral music as a percussionist, but it was more my relationship with the conductors that had the most bearing on the role I have assumed in Everyone Orchestra. Zambiland Orchestra out in Atlanta had a huge influence. They were the first improvisational ensemble led by a conductor that I was ever a part of. Other than the stuff I was organizing myself, but that was more drum circle and jam type situations. EO is definitely a descendant of Zambiland in a lot of ways. Although it has evolved to be very different.

BT: Sounds to me like there were two main ingredients in the EO recipe. Your connection to the musicians in the jamband scene, and your exposure to conducting.

MB: Definitely. And the first five or six years of EO, I didn’t conduct. I played drums, and I had other people conduct. So I had the experience of being conducted before I was the conductor. The forst time I conducted I realized it was a tough job, and something you couldn’t just do off the cuff. I decided I wanted to explore conducting as my new instrument. When I first started conducting EO, I kept a drum kit on the stage so I could join the jam, but I eventually decided to dedicate myself to the conductor and facilitator role 100%. It takes a lot of energy.

BT: Let’s talk a little bit about your process of forming the Everyone Orchestra line-up.

MB: The Everyone Orchestra really is different every time. We have been doing runs of shows, where there might be 3 or 4 shows where there isn’t a personnel change. That’s a really cool development for me, because it kind of gives us consistency that I never got before, where by the fourth show, there is this inter-play between all the members that is very deep. I feel like everything is a little more fluid as well, still improvisational, still fresh, and still off the cuff, but everyone is playing the roles of this game really deeply. I like to have a mix of new people, and people who have done it before. I also like a dynamic mix of instrumentation. I am willing to take risks. I collaborate deeply with a number of people when building the line-ups. Musician friends, promoters, and my manger. My manger has built a number of line-ups recently, not totally without me, but nearly. He has really taken on the laborious aspect of finding out who is available when and where. That is really the juggernaut of this whole project. A lot of times I look for a cause that we can associate with the event as well.

BT: So, once you have our group of musicians picked for a date, and you all gather at the venue the night of the performance, do you go over a set-list of any kind?

MB: Not at all. I talk with everyone involved, and get connected as much as possible. I feel a little manic or nervous until I am in touch with everybody. The last EO performance I did, at The Oregon Country Fair, there were 6 of 13 people on stage who had never met before. It’s not always like that, but at festivals, sometimes it is. I am asking people to do something very different with this project.

BT: It is a vulnerable position for a musician to put themselves in.

MB: Exactly. And that is the beauty of it. As soon as I get everyone to agree to be in that vulnerable state, before the music even starts, our awareness and connection really grows. I call that the Everyone Orchestra “Hook”…when everybody is on the same page, and they have all agreed to NOT know what is going to happen next.

BT: What I am picking up on here is the term “conducting”. You conduct the band in a traditional sense, with a baton, but you also conduct the energy of the band, like copper conducts electricity.

MB: Definitely. We all have to get on the same vibe.

BT: Although Everyone Orchestra always has a different line-up, there are a few musicians who have been involved more than others. Regulars if you will.

MB: Oh yeah. Jon Fishman has done a whole bunch. Jeff Kaufman has done quite a few as well. Both those guys come to the table with a series bag of tricks. As has Vinnie from Moe. Of course, the ALO guys. Trevor from Tea Leaf Green has been a part of this a lot as well. Steve Kimock has done a bunch as too. Kimock and I have collaborated in many ways and in many different situations. He will be at ARISE with EO. Kimock and I were jamming back when Jambay was together. We have a longtime relationship, and he has been a big supporter of anything EO has done.

BT: Any hints on what your approach is for ARISE?

MB: This is gonna’ be a unique one. The line-up is still coming together, but I will say this isn’t going to be a standard Kimock EO show, since ARISE is not your standard jamband festival. ARISE is very eclectic, featuring spirit based music and yoga, electronic music, etc. The vibe we are going for at ARISE is a “Futuristic-Techno-Americana” or something. This set is gonna’ represent what is going on in the Colorado music scene right now: acoustic instruments and beats. It is gonna’ be very unique, and we are really excited.

BT: How does Colorado’s music scene stand out to you?

MB: Colorado is like a different country right now. There is so much musical energy pouring out of its young people. Everyone really. Colorado’s music scene far surpasses any music scene in the country right now. Period. There are great venues, and masses of people come out. We have never had a dud of a show in Colorado. Ever. Colorado is glowing, and it is all happening there. Jamband, bluegrass, electronic and EDM, Americana…it’s all in Colorado. Plus Colorado is booming with art, and Yoga. ARISE really represents everything that is happening there.