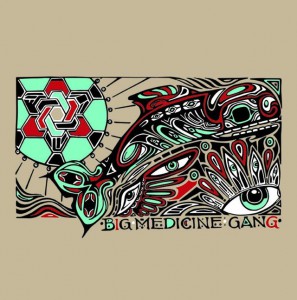 Jamestown is a tightly-knit group community of fun-loving music freaks, so it’s no wonder that the town’s latest musical offering, Big Medicine Gang, manages to be intimate, connected and fun-focused as well. This six-song debut EP, showcases a range of sounds for the band, all built upon a funky blues vibe with large qualities of reggae, rock and pyschedelia thrown in. While some songs, like the tracks “Barley In the Silo” and “Green Room” lean predictably toward that reggae-fusion, Big Medicine Gange stretches its sound with horn-heavy blues tracks like “Sarita.” One of the disc’s highlights is “Worry Your Head,” which surprisingly sounds almost like a heavy rock band’s take on traditional blues. It’s a powerful track with massive bass lines and fuzzy guitars and probably does more to highlight the group’s vast range and skill than a lot of the songs that sound more “them.” This EP is the first in a series of releases for Big Medicine Gang, who plan to put out three individual 7” vinyl splits later this year.