Trending Stories from The Marquee
You are at:Home»Brian F. Johnson»Blue Canyon Boys Dream Up a Take on Tradition With a Pulse
By Marquee Magazine on August 1, 2014 Brian F. Johnson, Features, Interviews 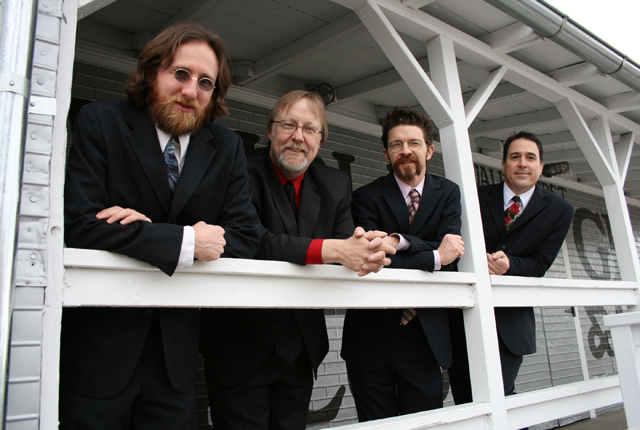 It’s not clairvoyance or ESP, per se, but Blue Canyon Boys vocalist/guitarist Jason Hicks is certainly familiar with premonitions. The Missouri-raised, Lyons-based guitarist explained that a couple of times a year he has dreams — which he described as “mundane” and usually centered around a feeling or color — that end up coming true.

“It’s not déjà vu,” Hicks said, during a recent interview with The Marquee. “They’re scenes that I’ve had in a dream and I remember them vividly.”

Hicks talks about it with a bit of shyness, but it’s something with which he seems fairly comfortable, even if it does get a bit spooky sometimes.

In 2011, after the sudden passing of his father, Hicks found that one of his newly written songs had taken the same path as his dreams; without even knowing it, he had written about his father’s death before it happened.

“I never had the slightest thought that ‘Up On The Hill’ was about my dad. I thought it was me, like me saying ‘Hey when I die, bury me here.’ But the song talks about being buried underneath a walnut tree, which he was, and it talks about songbirds and when he died the birds were just amazing. Songbirds were everywhere, and that’s when it came to me that I had seen this scene before. It was that unmistakable feeling,” Hicks said.

Feelings are something that Hicks is adept at understanding. As a craftsman by day, who builds high-end furniture, feeling the wood and the details of each piece as he goes, Hicks must find ways to adapt as he builds, never forcing pieces together that don’t want to fit on their own. And it’s with that sense of adaptation and understanding of what fits well together that Hicks and his bandmates the Blue Canyon Boys approach their music.

The band was started informally almost 10 years ago after friends from bluegrass picks found that their voices clicked. They quickly started picking up gigs and in 2008 won the Telluride Band Competition, while churning out regular releases. The group released it’s fifth album Next Go ’Round last year and are already working on their follow-up which they hope to release this fall.

“We have about two-thirds of the album done at this point. Everybody still has a few parts to do,” Hicks explained. While Blue Canyon Boys have always brought a very traditional style of bluegrass to the table, with soaring four-part harmonies at the center, Hicks said that the group is making a few changes on their new effort. “Some of this isn’t strictly traditional bluegrass,” he said. “To many people it will still sound like bluegrass, but traditionalists are going to find it much more riff and groove based. It’s got a pulse to it.”

He explained that the biggest focus on this new album is trying to make something that showcases the band’s strengths, while also giving it a real feeling. “We record and mix at our bassist Drew Garrett’s home studio and we really go over things with a fine comb. We don’t like to over-produce albums. I feel that a lot of bluegrass albums are kind of sterile. You know, a good live bluegrass band isn’t necessarily going to make a good bluegrass album, and a good studio bluegrass band isn’t necessarily going to make a good live bluegrass show. We’ve learned from our past about some of the things that don’t work live,” Hicks said.

Much of the material that they’re recording are songs that the band has already tested live and one song, in particular from the new album is a track that’s been around since the beginning of the Blue Canyon Boys. “Yeah, one song is actually the title track to our very first album and we’ve decided to re-record it,” Hicks said. “The song is ‘Just an Old Dirt Road’ and it’s a song I wrote when I lived on County Road 80, up near Shelly’s Cottages. I used to walk that road every day and that song was written on that road. We didn’t play that song for years, but we’ve brought it back since our first album is done and out of print and my voice has changed. It has some more age to it. So it’s just an updated version.”

The band will be very amicably changing one member just around the time the album is due. Denver multi-instrumentalist Ernie Martinez (who has filled in for band members in the past) will replace banjoist Chris Elliott, who will officially depart the group on October 1. Hicks said that change shouldn’t result in too big of a shake-up for the group since they’ve had some time to prepare for the transition and since the band and Martinez already work so well together. “He’s the guy we call when one of us is sick. We’ve hired him to fill in on both mandolin and banjo before at the spur of the moment. He’s the kind of musician where we don’t even have to go over anything before the set and it still goes smoothly. He just locks into the groove.”

• Bill Monroe and his Bluegrass Boys