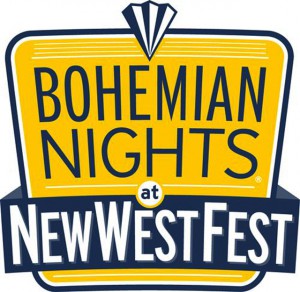 Bohemian Nights at NewWestFest is a free, three-day music festival that takes over the entirety of Old Town Fort Collins each August.

This year the festival, which has always been a major discovery destination, putting masses of Colorado artists in one area at the same time, will run from August 15 to 17. Spread out over six stages around the “festival grounds” of Old Town, the event does take some planning to navigate. Below is a list of some of the must-see sets.

Jackson Lamperes showed a flair for diplomacy at an early age which has served him well over the years.

It was in kindergarten when Lamperes met best friend and fellow Slow Caves’ bandmate Jakob Mueller, who had recently arrived to the United States from Copenhagen, Denmark.

“I was his first American friend,” said Lamperes, now 18, during a recent phone interview with The Marquee. “We’ve had a lot of good times over the years.”

Those good times figure to continue for the unforeseeable future and most definitely at the annual Fort Collins’ behemoth that is Bohemian Nights at NewWestFest where Slow Caves will help kick off the three-day festival. The musical extravaganza that’s staged in Old Town features over 70 Colorado acts and headliners Big Head Todd and the Monsters, Pat Benatar and War.

Slow Caves, which can best be described as a synthetic punk rock group, also features Jake Lyon (bass), David Dugan (guitar), Oliver Mueller (guitar, synth, vocals), along with younger brother Jakob Mueller (lead vocals, guitar) and Lamperes (drums). The five-piece will enter Bohemian Nights at NewWestFest on a tidal wave of momentum, stemming from the July release of their first EP Saturns, and they have plenty of other material up their sleeves.

“We want to release as much music as possible, and keep the momentum going,” Jakob Mueller said. “We probably have at least three other EPs ready to go, but we want to release one every three or four months. Most bands really don’t release LPs anymore.”

Lamperes and Jakob Mueller, ultimately, want to take things out on the road. The group has been cutting its teeth a little in Denver at the Larimer Lounge.

“Going out on the road and playing different places is the next step for us. We absolutely want to make a career out this,” Lamperes said.

Hardly sounds like bad idea at all for a couple of guys that happened to hit it off in Kindergarten.

Michael Kirkpatrick (mandolin, guitar, vocals) and the rest of his bandmates from The Holler will kick off festivities with their catchy style bluegrassy/rock and roll. Influenced by everything from The Grateful Dead to Led Zeppelin to the Talking Heads, The Holler, also features Peter Knudson (drums), Brad Poto (bass, vocals) and Brian Adams (guitar, vocals).

Mama Lenny and the Remedy

Not many bands can pull off the combination of original rock, rhythm and blues like this soulful band. The local Fort Collins group – formed in 2011 – will be front and center in their hometown Saturday evening at the Mountain Avenue Stage incorporating a full arsenal of trumpets (Greta Cornett), guitars (Kenneth Monks), keyboards (Thalia Stevenson), drums (Jeff Blayney), bass (Ben Prythetzch) and captivating vocals (Laniece Schleicher, Amanda Ernst, Kelly Keeler).

As the tale goes, The Burroughs came to fruition at an Irish Pub when Craig Basarich (trumpet) saw old pal Johnny Burroughs (lead vocals) sing a few songs at an open mic night. That 2013 reunion led to the formation of what is now a can’t-miss nine-piece soul and funk extravaganza.  While the group is comprised of three Burroughs’ brothers, anyone wise enough to attend one of their gigs is considered to be a part of the family.

Like the name suggests, The Widow’s Bane walks a little off the beaten path. Frontman Mortimer Leech leads this folk-punk, gothic-rock, murder-ballad infused group. This Boulder eight-piece is known to incorporate zombie-style makeup and Great Depression-era costumes into what can only be described as a unique, if not unforgettable, on-stage performance.

You Me and Apollo

Inspired by Colorado native Brent Cowles (lead vocals, guitar), You Me and Apollo is an indie-folk group that also features Tyler Kellogg (drums), Jonathan Alonzo (vocals, guitar, keyboards), Morgan Travis (guitar) and Dave Cole (bass). The impressive quintet, that employs hints of psychedelic and soul into its repertoire, is just a few months removed from the release of its most recent album Sweet Honey, which it has been extensively touring in support of.

Forged in a Greeley basement by Joshua Scheer (vocals, bass) and Johnny Day (guitar, banjo, vocals), this alternative-folk band also features Megan Huffman (piano, vocals). The trio released their debut EP On My Way earlier this year and has only been picking up momentum since.

Frontman Randy Kent has long been a Colorado music mainstay. Formerly of The Heyday, Kent is an accomplished singer-songwriter. The quartet — also composed of Ryan Buller (guitar), Chris Beeble (bass) and Jesse Spencer (drums) — is influenced by the likes of Tom Petty and Ryan Adams. The group’s most recent EP, Lesson Learned, was released earlier this year.

Bohemian Nights Bohemian Nights at NewWestFest Mama Lenny and the Remedy NewWestFest Pandas and People Slow Caves The Burroughs The Holler The Widow's Bane The Wild After You Me and Apollo
Cool, Share this article: Twitter Facebook Google+ Pinterest LinkedIn Tumblr Email
Previous ArticleThe Deadwood Saints ‘6th Street and Trinity’
Next Article Blue Canyon Boys Dream Up a Take on Tradition With a Pulse