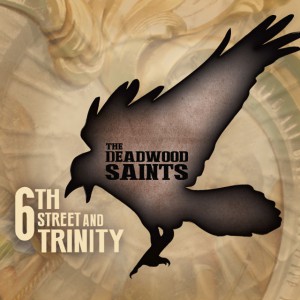 Despite all of the things that we should be appalled by, there’s a surprising lack of protest songs these days. But The Deadwood Saint’s “The Flood of Nineteen Never” on their new album 6th Street and Trinity does a damn good job of changing that, with a sing-along chorus that challenges listeners to, “Come to streets, and shout as loud as you can that war is not the road to peace.” With that cry, Deadwood Saints guitarist/vocalist Jeremy Grant sets the tone of this intelligent, well-crafted Americana album. From protest tunes to whiskey ballads Grant and company put forth a debut album that is well-phrased both musically and lyrically. 6th Street and Trinity balances on the fence of multiple genres from Americana country to singer/songwriter to rock, and the fulcrum of that balance is firmly positioned on Grant’s songwriting, which is immensely skilled at making ugly things sound pretty. “Cheap Guitar” is a prime example, a bitter-sweet tale of a down-trodden man, trying to find some solace in a life that hasn’t gone as planned. Along those same lines, “Ms. Daisy” — the only track on the album not written by Grant [writing credit instead goes to guitarist/mandolinist/pianist Darren Radach and Brian Johanson]— also has some brilliant phrasing about a “poor, old, white-trash Ms. Daisy,”  and the beautifully told story about her less-than beautiful life and the transformation that ensues.