Trending Stories from The Marquee
You are at:Home»Album Reviews»Ark Life ‘The Dream of You and Me’
By Marquee Magazine on September 1, 2014 Album Reviews, Brian F. Johnson 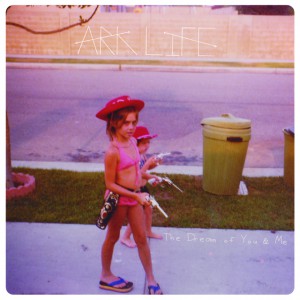 The Dream of You and Me

Not to be diminutive, but Ark Life’s debut release The Dream of You and Me, is as cute as a basket full of kittens. The band — which features former These United States frontman Jesse Elliott, hi-dive talent buyer and drummer Ben Desoto, keyboardist/art gallery co-owner Lindsay Giles, bassist Anna Morsett and guitarist Natalie Tate — is obviously heavy on the girl power, which adds a softer feel to even the band’s most rocking songs. But Ark Life’s early 1970s feel of story-telling melodies doesn’t have many rough edges to begin with.

From the opening peppy track “Let Your Heart Break” to the final notes of “Rock and Roll (Take it Easy),” which claims “rock and roll got the best of me,” Elliott seems to be exorcising past demons from years on the road with T.U.S., and The Dream of You and Me shows the almost perpetually happy singer at his cheeriest, having fun with friends, playing music.

Despite all the fun and relaxed feel — or maybe because of it — the songs are instantly approachable and connective. “You’re With Me” is one of the disc’s most gorgeous arrangements with Ark Life’s ladies providing an angel chorus against Giles and Elliott’s lead vocals. The song “Proud of Me Out There Mama” is a heart-warming, cute song where Elliott tells his mother that he and his bandmates are living respectfully and happily on the road. Hopefully the parents of all of the members of Ark Life listen to that track, because those folks certainly would be proud of the art their off-spring have created here, as well as the unassuming way in which they present it.