Trending Stories from The Marquee
You are at:Home»Cover Story»Nathaniel Rateliff Preps for a New Folk EP and a New Album With the Night Sweats
By Marquee Magazine on December 1, 2014 Cover Story, Features, Interviews, Timothy Dwenger

Denver songwriter Nathaniel Rateliff, who first became known for his rock band Born In The Flood, has made an international name for himself as an indie folk musician appearing on Later…with Jools Holland, tours with Mumford & Sons, and even on the pages of The New York Times. Critics raved about his album Falling Faster Than You Can Run. The Times called him a “folk pop hero.” But while he’s getting close to putting out a new EP as a follow up to Falling Faster, Rateliff is currently focusing on another sound and project entirely.

Last year Rateliff debuted the new outfit that he dubbed Nathaniel Rateliff and The Night Sweats at a packed and sweaty Bluebird Theater to critical acclaim. Though the band shares a few members with his folk project, The Night Sweats stand in sharp contrast to anything that Rateliff has done in his career to date. It’s a horn-fueled soul and R&B revue that thrusts Rateliff’s powerhouse voice and stage presence into the spotlight. 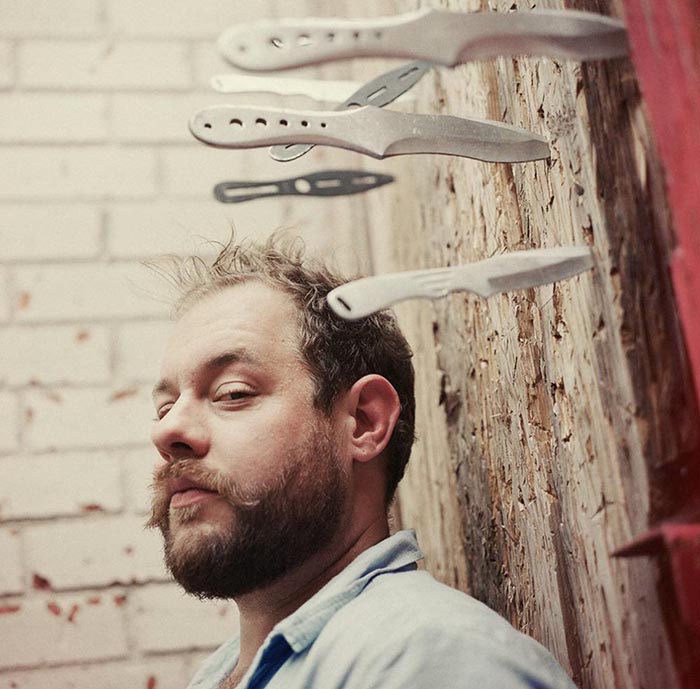 While The Night Sweats have toured very limitedly and only released two songs to date (a 45 featuring “Look It Here” and “Trying So Hard Not To Know”) it sounds like that all might change relatively soon. “I’m on my way out to Oregon to finish mixing The Night Sweats record with Richard Swift,” Rateliff said during a recent interview with The Marquee as his wife drove him to the airport. “Hopefully it will come out in April or May.”

Anyone who has seen or heard the band probably expects a straightforward throwback soul record but Rateliff isn’t sure that’s exactly where this project will end up. “I’ve always loved ’70s rock that is influenced by R&B so that’s hard to get away from for me. As much as I like the earlier stuff too I don’t want to sound like just another blue-eyed soul guy,” he said. “When I got ready to work with Richard [Swift] I just kinda buckled down at home and tried to record and write as much as possible. I went into his studio with a lot of different types of ideas, not just the Sam & Dave or Otis Redding style throwback ’60s soul and R&B, some sounding like The Band or George Harrison and we were like ‘Well, I like all these songs, how do we make them work.’ I made some different arrangements and Richard had some ideas and so did Patrick [Meese] so it was really just the three of us who were working on the record and then I came home and did some horns here in Denver. We’ll see, I’m interested to see which, out of the 15 songs that we have right now, end up being the 10 on the record.”

In the meantime, this month Rateliff will be headlining The Ogden Theatre in Denver for the first time as he gears up for the January release of his new folk EP Closer. The six song collection is the follow-up to his outstanding 2013 release Falling Faster Than You Can Run and is sure to be featured prominently in the folk portion of his Ogden show.

Though he admitted he was a little nervous to play the big room on Colfax, he’ll be serving up the same two-set format that thrilled a packed house last Thanksgiving at The Gothic so that calms the nerves a bit. After opening sets from Ark Life and Ben Kronberg, Rateliff’s first set will feature his folk persona while his second will feature an all-out Night Sweats assault. The dichotomy between these two sides of his musical identity may seem strange to some, Rateliff downplays it. “Both these guys are a part of me so it’s not that difficult for me to switch between the two,” he said. “I feel like no matter how different they seem, they are both characters of myself.”

When he takes the stage as the frontman of The Night Sweats, Rateliff embodies a true soul-man. Fans of his folk project might be shocked by a sloshing glass of whiskey, a heel spin, or a from-the-depths-of-his soul howl, but it’s this kind of raw emotion and showmanship that makes The Night Sweats so entertaining. “I just try and get carried away and be as ridiculous as possible,” he admitted. “I have a buddy, Matt Vasquez and he does some really ridiculous stuff on stage so that’s always encouraging to know you can get away with that kind of stuff.”

Nathaniel Rateliff and the night sweats