Trending Stories from The Marquee
You are at:Home»Album Reviews»Railroad Earth ‘The Night Air’
By Marquee Magazine on February 1, 2015 Album Reviews, Brian F. Johnson 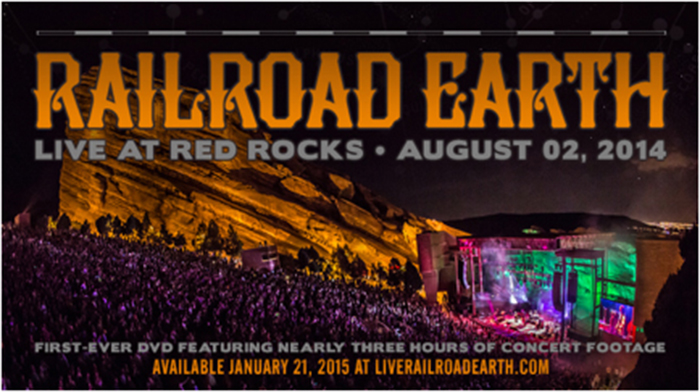 Editor’s note: While this is not a release by a local band, this video was locally filmed, locally produced and locally premiered, thus we amended our “locals only” policy.

Live at Red Rocks, which premiered last month at eTown Hall in Boulder, sees Railroad Earth covering their entire 13-year career over their seven-album catalog in top form. With the addition of a full horn section dubbed that night as the “Mile High Horns,” the band tears through their repertoire with an exuberance and energy that they rarely have the opportunity to present at smaller club shows.

The 10-camera shoot, photographed by Colorado’s own NoCoast, provided such a wealth of footage that few corners of Red Rocks were left undocumented that night. While all of that material that could have easily and predictably been edited into an MTV style, strobe-like video, NoCoast carefully stitched the footage together to allow for thoughtful pauses and sweeping pans that capture the entire vibe of the evening at the historic venue. That open presentation also allows for plenty of crowd shots, and it’s relatively safe to say that anyone within the first 20 rows of the show appears at one point or another in the final cut.

The band had originally planned to release the entire show on one DVD, but last-minute evaluations of the compression needed to fit the nearly three-hour show and a 5.1 surround mix of the concert onto one disc determined that quality would have suffered, so ultimately the band decided on a double-disc release.

For those who attended the show, and for those who wished they could have been there, Live at Red Rocks serves as a phenomenal keepsake and a documentary of what they experienced or what they missed on that breezy August night.