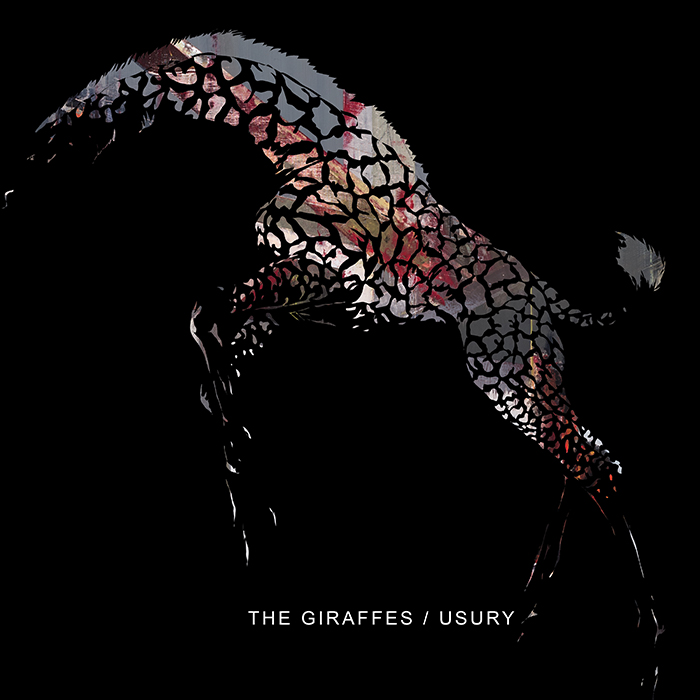 On the opening track of their new album Usury, The Giraffes’ lead singer Aaron Lazar bellows “All will emerge unscathed, cause it’s every single dream we’ve ever ever made.”

Despite its sludgy, punk meets metal flavor and its dark-sounding title, “Blood Will Run” is quite possibly one of the most optimistic songs the band has ever put forth and signifies a new era for the group, which a few years ago seemed destined for the morgue.

Last year, when the first signs of a pulse started to signify the re-awakening of The Giraffes, left-handed guitar wizard Damien Paris said that the band was wary of ideas. “When we were at our best, we came to the table and wrote songs and it wasn’t idea rock. Aaron has a lot of ideas,” he cynically said of the frontman, vocalist Lazar, who had left the group in 2011 putting a large nail in the coffin of the band.

Lazar came back to the table last year, but the sting of his departure and different theories on artistic advancement were initially blocking any real chance of The Giraffes’ forward momentum on new material. But in the same interview where Paris had talked of ideas, he said too that Lazar was the kind of guy that needed to destroy everything and sift through the ashes before he could continue, and somewhere, somehow during the past year Lazar’s excavation of the ashes of The Giraffes ended, and a repurposed, re-ignited and re-invented band has emerged with some of their strongest and most personal music to date.

Usury is The Giraffes’ first proper release since 2011’s Ruled. Sure there was the 2012 collection of rarities and b-sides Farewell Fat Astronaut and the somewhat ill-fated Tales of the Black Whistle in 2013, which featured female vocalists instead of Lazar. But this is the first full-length release of new and original material by the band in four years.

Usury serves as a comeback as well as a throwback, while also including a leap forward. Some of the heavier, story-oriented tracks, like the aforementioned “Blood Will Run,” and the absolutely epic closing track “How It Happened to Me” (which features some of Paris’ most artistic, almost stunt-like shredding) would fit perfectly alongside material from the group’s 2003 spaghetti-western EP A Gentleman Never Tells. Other tracks, like the topical “Facebook Rant” and “Product Placement” line up perfectly with the musical feel and frustrated damned-if-you-do sentiment of Ruled. Still others like the Fee-fi-fo-fum cadence of “Washing Machine” and the almost journal entry-like “White Jacket” show The Giraffes presenting some of the most solid and inspired rock of their career.

More than any of its parallels, Usury marks a matured, directed and calculated one-two punch from The Giraffes. The first fist reminds listeners of the power of the band, and the quick-to-follow upper-cut is a reminder that they have miles to go before they sleep. Usury is, in fact, the first in a three-record deal with Silver Sleeve Records by the band, and this first chapter has started with a loud, raucous and somehow still thoughtful bang.