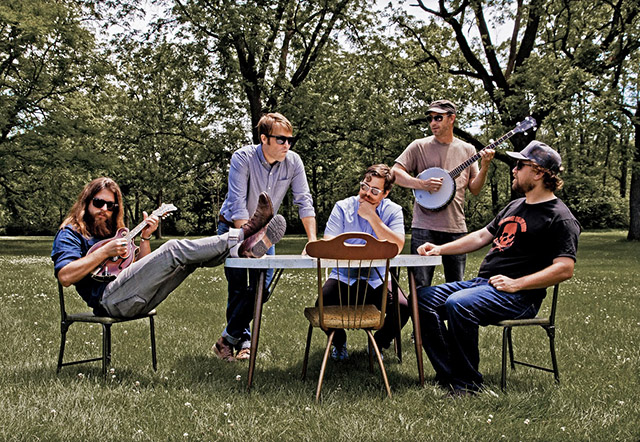 For years the Kalamazoo Mich.-based Greensky Bluegrass found themselves playing to legions of dedicated fans in Colorado — it was almost a second home. They frequented The Mish, won the Telluride Bluegrass Festival band contest, and worked their way up through the vast network of clubs the state has to offer to multi-night headlining runs at The Ogden and Boulder Theaters. They even got to co-headline a performance at Red Rocks this past summer.  Apparently all those years of success in the great Colorado music scene motivated several members of the band to relocate to the Front Range over the past couple of years.  With three of the band’s five members now living in Colorado, it’s quickly becoming a real home to the band.  And it’s a home that has inspired songwriters Paul Hoffman and Dave Bruzza to put pen to paper and write enough new material that the band is already considering a follow-up to their 2014 gem If Sorrows Swim.

“We do have a lot of new music and we are going to begin making a new record soon,” Hoffman told The Marquee from his home outside Denver as he shook out some cobwebs after a late night celebrating a good friend’s birthday.  “We are sort of planning to break this record up a bit and make it in a couple of sittings so we are a little reluctant to tell people that we are starting a record as it may be a while.”

Fans who are curious about the new material will have to remain so as the band doesn’t plan on heavily road-testing the material before putting it to tape.  “I still have the sense that we need to go out and do something fresh and new all the time but we’ve reached the stage in our career with our fans where they want to hear the songs they love.  That’s not to say that people don’t want to hear the new songs, because they are awesome, but it takes them a minute,” Hoffman said before elaborating.  “I even see it with bands like Phish; they played the Bend shows at the beginning of their summer tour and they premiered seven new songs over two days and people were kinda like ‘meh.’  Looking back on it, in five years, people will brag that they were there the first time those songs were played – but the point is that premiering new songs is hard.”

While debuting a new song may now be a calculated move for a band like Greensky, Hoffman thinks it is a natural part of a band’s development and maturation process. “In the beginning of a band’s career you are in a race to get as much catalog as possible and we’ve come to this place where people really like us – thank the lord – and our catalog is pretty freakin’ large. We maybe know 200 songs that we could just drop on a dime – they’re not all ours, clearly, but it’s big.”

With a repertoire that large, Greensky is able to play several nights in a row on tour without repeating a song much like the Grateful Dead, Phish, or any number of other jambands that crisscross the country with an army of followers hanging on every note and clamoring for old favorites. That said, Hoffman and his bandmates understand that new material is crucial to the longevity and relevance of their band and they are fortunate enough to have two extremely talented songwriters in Hoffman and Bruzza who are constantly creating.

“Lyrically and melodically Dave and I write the songs, but when it comes time to figure out what the groove is going to be, or what the instrumental hooks will be, or how the song is going to work, we do that as a band.  It’s an arrangement process,” Hoffman said. “I’m not sure if some of that has evolved because we are a bluegrass band or because we play melodic stringed instruments or whatever, but often when Dave or I write a song its very bare-bones basic ideas.  Sometimes I don’t even have a complete song, I’ll just have an idea that I want to do this ‘thing’ and then we talk about it and figure it out as a band.  It’s pretty awesome as a writer for me to be able to create this little thing and bring it to the band where it becomes a real song.”

For Greensky, the process of finishing a song has evolved as they have matured as a group.  When they first started out every song was road-tested long before it was cut in the studio, but as the years have passed they have changed their focus. With each passing album fewer and fewer songs have been played for the fans before being committed to tape.  “Making a record is all about commitment and as a band that jams and changes the tunes when we are in the studio and making a record, we are committing to the song at some point and saying ‘O.K. so this is what it’s gonna be.’  If a song hasn’t been played live yet, then it could change. It’s a pretty exciting process.”

Listening to Hoffman speak, it becomes clear pretty quickly that the entire process is exciting to him.  “I write on the guitar and then I give it to Dave,” he said.  “Often, when I teach the band a tune that I’ve written, it’s the first time that I’m playing it on mandolin so I learn it with them.  It’s really a bizarre process.  Dave plays guitar totally differently than I do so as I’m writing something and playing it, I’m aware that when Dave takes it over he’s going to crush it in a way that I can’t.”

That kind of respect between band members is critical to success and when they are on stage it is clear that this is truly a band of brothers who are looking to each other to ensure everyone succeeds. There is no one member who is carrying the group. Instead it is a band mentality and as Hoffman talks about Bruzza the admiration runs high. “I’ve never met another guitar player that can play guitar like he can.  In the bluegrass world the mandolin is the chick-boom-chick-boom-chick-boom-chick and a lot of guitar players have a tendency to accent that off beat in their guitar picking,” Hoffman said.  “Dave does this really driving on-the-beat guitar playing that’s pretty freakin’ incredible.  Not a lot of guitar players can do it – Del McCoury can do it – but Dave is really freakin’ good at it so I’ll give it to him and say this is supposed to be bluegrass but it kinda goes like ‘this’ and he plays it and I’m like ‘yep, exactly like that.’”

That kind of ‘group think’ is a blessing in bands and it’s clear that Greensky has it in spades. Each album is better than the last and their live show is something to witness as they blast through the boundaries that used to confine traditional string band music. “For us the fusion was natural. When we started we were dudes who liked rock and roll and we became this bluegrass band that jams. We just keep pushing it farther and farther and it’s interesting to think at what point people will tell us we’ve gone far enough and should stop,” Hoffman laughed.  “Our instruments have limits and we challenge ourselves to push those limits and our sound engineer helps us with making the sound big. We ask ourselves ‘How big can we make this sound without drums?’  ‘How big can the bass be?’  We joke around and say things like, ‘This song is supposed to sound dubstep even though we are a bluegrass band.’  For me it’s pretty interesting because the farther we go into it, and the deeper we get, sometimes we are real quick to say we aren’t a bluegrass band but we absolutely are a bluegrass band also. When we play something that’s bluegrassy, it’s bluegrassy and we play it like a bluegrass band. It’s a fine line for me. We aren’t irreverent, we just want to do our thing.”

Given the very early stage the band is in with their next record Hoffman didn’t have much to say about the direction the project was likely to take except to say that “none of our albums are, in my opinion, drastically different from any of the other ones. I think that maybe listeners might disagree or they would have opinions that maybe this one is more bluegrassy than that one, or that one is darker than this one, but for us it’s just the next step in a sequence of steps. We are going to try different things and try to perfect things that we have tried before and do them better. We’ve always been that bluegrass band that’s not a bluegrass band” and it doesn’t sound like that is going to change anytime soon, thank goodness.”