Trending Stories from The Marquee
You are at:Home»Album Reviews»Leftover Salmon ’25’
By Marquee Magazine on November 1, 2015 Album Reviews, Brian F. Johnson 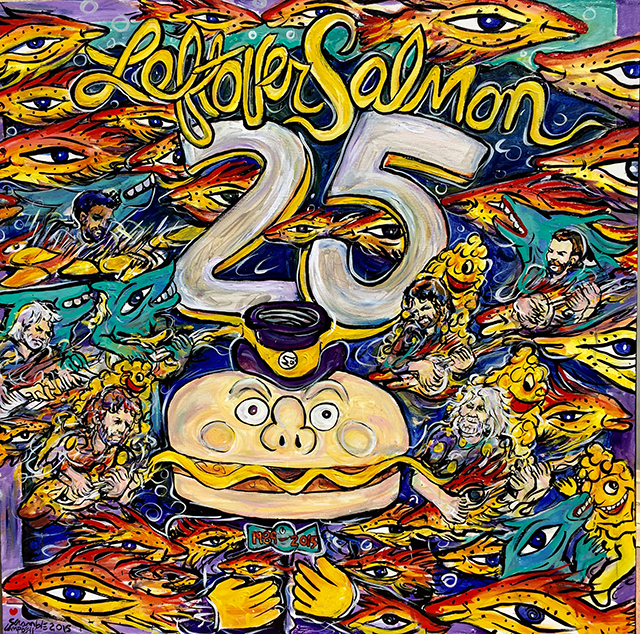 Whether in hot and sweaty concert halls or under cool starry Colorado skies, Leftover Salmon is always about that unmistakable party vibe. They’re the Prozac of live music, and effortlessly toss out smiles with their tunes — and not surprisingly because of that they have always, first and foremost, been a live band. Leftover Salmon has released several live albums over the years but this newest collection of 25 songs — meant to mark the band’s 25th anniversary — is bigger, brighter and serves as a thank you to everyone who has joined the party over the years, as well as being an invitation to those who have yet to partake.

The twenty five never-before-released live recordings were culled from performances throughout 2013 and 2014, following the release of their album Aquatic Hitchhiker. All but one of the songs (“Blister In The Sun”) includes keyboardist Bill Payne, but all of the recordings were made before Payne was an official member of the group. At the time of the recordings Payne was still listed as a “special guest,” but the chemistry of the at-the-time still very fresh line-up is palpable from the opening notes of “Midnight Blue” to the final album encore of “Big Railroad Blues.” The band digs deep into their catalog for a couple of songs, performs some of their more recent studio work, and goes through a whirlwind of covers from Dylan to Hartford to the Violent Femmes. It also shows Payne’s signature coming into the band as he introduces Little Feat songs like “Easy to Slip” into the repertoire.

In a brilliant cross-promotion, Leftover Salmon once again teamed with Breckenridge Brewery (which celebrated its 25th anniversary this year as well) to create Silver Salmon India Pale Lager, which will be packaged exclusively with the new album.