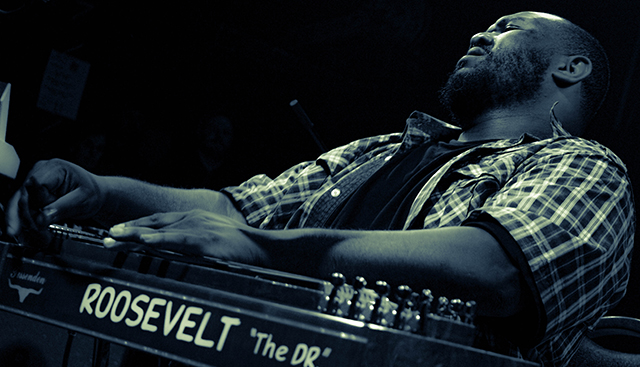 CANCELLED (Read a statement from the venue here)

Statement from Roosevelt Collier regarding cancelled shows:
https://www.facebook.com/RooseveltCollier
“I got news today that The 1up – Colfax suddenly decided to close and cancel all future shows, including the Colorado Get Down scheduled for this Fri & Sat in Denver. I just want to apologize to the fans, because this was a real shock to all of us, and encourage everyone to get their refund from the venue. Know that we are working hard to relocate the Denver shows for this weekend… and that Thursday night at The Fox Theatre in Boulder is still on! Please stay tuned, much love – Roosevelt”

Roosevelt Collier is a grown-ass man, but when he starts talking about playing music with his friends, a childish side oozes out of the pedal steel virtuoso. And as he continues to talk about it a picture emerges of an excitable little boy, literally bouncing with anticipation, as he describes the play-dates of sorts that he sets up with his friends.

“So the Get Down, All-Star jam, whatever you want to call it, it’s all the same,” said Collier during a recent interview with The Marquee. “I started going to all of these different towns and started to get all of my friends from various groups and things together and just told them, ‘Let’s all come together and let’s just throw down, without no thinkin’ about it, with no type of setlist or thought. Let’s just come and play.’ And man, that there just takes it back to your childhood. It’s the kind of playing that came from where you were in your room with a bunch of friends just jamming.”

Collier was raised in the House of God Church, around the “sacred steel” gospel musical style and the pedal steel sat at the front and center of sermons. Through church services and then playing alongside his uncles and cousins in The Lee Boys, Collier learned not only to master his pedal steel, but something even more important that has allowed him to lead Get Down jams across the country. “Basically it came to me over my years and years of playing with people — being like a gunslinger, you know — just coming out and jumping on stage and years of sitting in, not knowing their set but just going in head-first and just making it work. A big part of that though is just listening and being a team player, adding my own flavor to whatever show or situation that’s going on,” Collier said.

Having big ears and the musical chops to back them up is one thing, but being able to compose and conduct on the spot is next-level shit. Collier however, breaks it down like it’s not that big of a deal. “If you’re playing with guys that can kill it it’s not hard to play a show without any preparation. A lot of players are not used to it, so the thing I do is make everybody comfortable,” he said.

A giant factor of that is what Collier refers to as the stress-free zone. In many ways Collier isn’t too different from one of his mentors Col. Bruce Hampton, who has made a career out of getting musicians to let go. [Collier by the way does a pretty good Hampton impression and in the Colonel’s voice, he joked, “I raised ole’ Roosevelt.”] But from the moment a Get Down gig is first conceptualized, all the way until the first notes are played, Collier does his best to keep everyone involved cool as cucumbers.

“Everybody has their big band that they have to practice and  practice and spend tons and tons of hours on and then if they get another gig they’ve got to practice that music and practice that music. So I said ‘Listen, forget that! Let’s just do something where we get back to our childhoods and let’s just play.’ The crowd loves that because it’s authentic, it’s original and you don’t know what’s about to happen — what’s going to take off, who’s going which way and those are the best shows because it can go all types of ways. And it happens the most when you have all the players comfortable. I tell them, ‘This is a non-stressful show and we’re about to go and have fun.’ And then, taking another cue from Hampton he adds,  ‘If you mess up, so what? We don’t care, you know? If you mess up, do it good and let’s roll with it,’” he laughed. “It’s a gift, you know? I’m known for kind of like getting right to it. The thing is, everyone looks for that moment of each show — that high moment that everybody wants to get to and my job is to create that moment on the fly. And a lot of it goes with me playing a lot of music too. I play drums, bass and keys and I can hear horn parts and things of that nature, and I also let the group dictate how we should start something and watch it form.”

For his upcoming Colorado Get Down at the Fox Theatre Collier will be joined by Bill Nershi (String Cheese Incident), Joel Cummins (Umphrey’s McGee) and Matt Lapham (Shak-Nasti), as well as by Big Gigantic’s Dominic Lalli and Jeremy Salken. The following two nights at the 1Up, the Big G guys will not join, but Dave Watts of The Motet will. While he didn’t have further details as of press time, he said that he was still reaching out to his friends to see who else might be able to play any of those nights.

Although Collier revels in these throw-together gigs, he said that he does have plans in the near future to solidify a proper band, but like a kid growing up, he made a vow that he’d still keep playing with his friends. “I’m going to put together a band that will be my project, and work on an album and all of that stuff, very, very, very soon,” Collier said. “But that won’t take away from these all star shows. The thing about it is that I enjoy these shows so much because it gives me a place where I can talk to my friends.”