Trending Stories from The Marquee
You are at:Home»Brian F. Johnson»The Yawpers Sign to Bloodshot, Release Their debut ‘American Man’ and Struggle Through an Insanely Difficult Time
By Marquee Magazine on November 1, 2015 Brian F. Johnson, Interviews 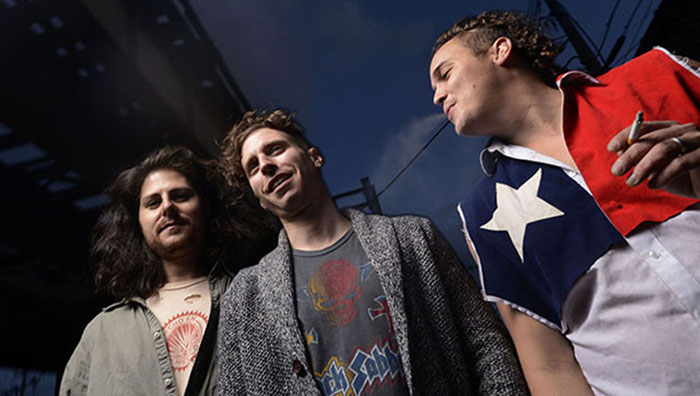 The Yawpers’ Nate Cook doesn’t mean to be a downer. He’s quick to be grateful for the success his band is seeing right now. But the same year that brought his band a record deal has also brought with it tremendous, unimaginable losses. “My best friend was teaching his daughter to drive and she flipped the car and he passed away, and then about two weeks later my wife left me for an Elvis impersonator and now lives in Las Vegas,” Cook said during a recent interview with The Marquee. “So when somebody calls and says ‘Hey I just read about you in Rolling Stone’ and then I get the next phone call from my wife, who is like ‘You fucking cock-sucker, this man is so much better to me than you ever were’ (My wife is French by the way, I wasn’t just doing a random accent). It’s been a really complicated time, but I’m managing, and if anything it will just make me more focused on my work.”

While it’s an often told story these days that a band is more likely to have each of its members hit the lottery on the same day than they are to get a label deal at SXSW. The Yawpers successfully scratched that magic ticket this past spring. The album they finished in 2014 was picked up by Bloodshot Records and the band offered a three-record deal, after an incendiary SXSW showcase performance in front of a day-drunk crowd outside of a punk club in Austin.

Luckily The Yawpers — Cook, guitarist Jesse Parmet and drummer Noah Shomberg —weren’t just part of the SXSW hype machine. The group’s album, American Man which was officially released the day before Halloween, is by far the band’s most stunning, and real work to date. With the majority of the material written by Cook during what he called a “feverish” session in February and March of 2014, the album showcases 12 tracks of The Yawpers’ ferocious acoustic-rock style. Produced by Cracker co-founder Johnny Hickman it was recorded live to tape over a four-day recording session. It doesn’t have bells and whistles, and Cook said that is takes a turn for the band toward substantive rock, versus just music to party to. “I wanted to shy away from that rock bottom aspect of our music which is like get drunk and party, and shit. I wanted something that brought a little more weight for me as a human being,” said Cook. “So I spent a lot more time working on what I wanted to say and then trying to do it the best I could. I feel like the narratives were a lot stronger and the production is a lot more authentic. That was the main word we used writing and producing and pitching the record was really trying to achieve authenticity whether it’s good or bad. It was about being as honest as possible.”

The massive amount of power that The Yawpers achieve with two acoustic guitars and a drum kit, not to mention Cook’s howling vocals, is unreal. While The Yawpers didn’t start out in 2011 sounding like they do now, Cook said that they’ve always had a rough sketch of who and what the band would be — ever since Parmet started joining him on singer/songwriter sets at the No Name Bar in Boulder after the demise of their previous band Ego Vs. Id. “From the beginning we had the idea that we at least wanted to use the format of two acoustic guitars and drums to slide past the shitty, sad state of modern rock and also to make it so frenetic and violent that we could also bypass the dog shit that fills the Americana airwaves as well, and try to shoot that gap,” he said. “The idea of The Yawpers from the formation to now has always been to try to offset the message with the music. They’re dichotomous. The music is designed to be something that somebody driving a dually truck who shoots shotguns on the weekends and supports the war in Iraq could enjoy via the music, and then if they want to take it any deeper there is a strong human lyrical element to it. I do get nervous that we’re going to get co-opted by or suffer from the ‘Born In The U.S.A.’ syndrome and that people will misrepresent what we’re doing, but that’s kind of the idea of it. We do have people that come up to us after shows who want to get rowdy and get into fights but there is a significant contingent of our fan base that has gone a lot deeper into it and taken the time to get that we’re actually trying to say something as well.”

And clearly Cook has a lot to say. While this year’s incredible trials for the songwriter came after American Man was written and recorded, the brutality, frustration, loneliness and bewilderment of the material certainly parallels with the feelings he’s currently wrestling. On the track “3 A.M.,” Cook sings “Maybe tomorrow will bring me one more day of sun. No consequence, no self reflection, just living on the run. Maybe I’ll turn to Jesus, maybe I’ll cash it all in, I can feel the darkness coming sitting here at 3 a.m.”

It’s getting through that darkness at 3 a.m. that is the crux now and something of which Cook is acutely self-aware. “It’s so strange because when everything started professionally to come together cohesively, my personal life started spiraling into insanity and discomfort,” he said. “My professional life is finally doing something that I’m proud of. So it’s been hard for me to stand back and take a real assessment of where I’m at because it’s been such a tumultuous time,” he said. “I feel like this should be the most exciting part of my life and instead it’s turned into me being very suspicious of myself and my intentions all the time. I’ve had a couple lucky breaks where I’ve been able to leave some things cathartically — obviously very dangerously— but that has allowed me to step back and ask what is it really that I want, and really what am I doing and really how I am going to get through this.”

But in a darker, scarier realm that both interviewer and subject uncomfortably laughed off as a “Barbara Walters moment,” Cook continued to explain that the current situations he’s dealing with are but the surface level of a much larger, and deeper wound that still needs to be excavated. “It’s been a trial and it’s unfortunate too, because my propensity as a human being, which I’m pretty sure comes through in my music, is to be pretty self-destructive. So it’s been a real struggle to try to keep away from the things that are going to wind up destroying my career until I wind up losing everything. So I’ve had to sit in the fire and kind of deal with things the best I can without going totally off the rails with booze and drugs. I think I’ve got a good support system and I’ve got the tools necessary to claw out of the hole, but even when I’m out of the hole, I don’t know. Before my wife left me I was miserable. Before my friend died I was miserable. When I was 21, I was miserable. When I was 12, I was miserable. So I’ve got to figure out what the root of it is and that seems like more of a lifelong process than something I’ll figure out in therapy in the next couple of months. I will say if it weren’t for the professional  success right now I’d be fucked. I’m incredibly grateful that this stuff happened when it did, because I have enough going for me that I have reason to work on it.”