Trending Stories from The Marquee
You are at:Home»Album Reviews»Bud Bronson and The Good Timers ‘Fantasy Machine’
By Marquee Magazine on December 1, 2015 Album Reviews, Brian F. Johnson 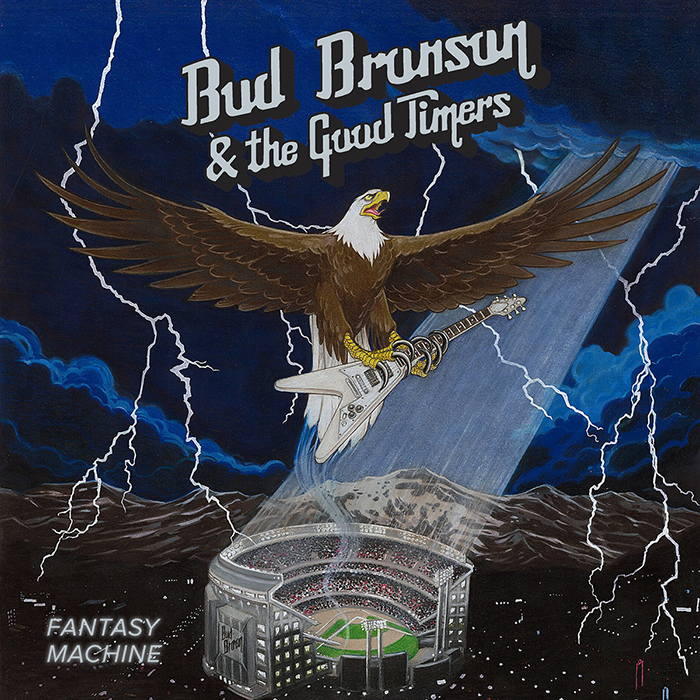 Bud Bronson and The Good Timers

They say don’t judge a book by its cover, but judging an album by its cover has never been easier. Bud Bronson & The Good Timers’ Fantasy Machine features a bald eagle, playing a Flying V, while soaring over a football stadium in a lightning storm. It’s more ’Murican than Wal-Mart and lifted Dodge pick-ups. Couple that art with the anthemic dual guitar introduction and Van Halen-like riffage and Fantasy Machine has the potential to make the most radical ISIS members throw on some sleeveless denim, drink a Coors, and grow a mullet.

The Greater Than Collective said that the album “splits the atom between earnestness and absurdity.” With an auto-biographical narrative that introduces listeners to the band’s humble beginning as teenagers in and around Denver, the album follows the story as the musicians “grow up” while also talking about the dream of playing in a rock band and the realities of that lifestyle too. The songs feature dozens of references to Denver landmarks, good and bad, from Coors Field to the always classy Kitty’s South. And in case it’s not completely evident by the end of the twelfth song, the band explains how life is about “runnin’ wild, flyin’ high and livin’ free.” Ironically or not, that’s exactly what Fantasy Machine is about too.

The Savoy at Curtis Park | December 18