Trending Stories from The Marquee
You are at:Home»Uncategorized»Denvoid and the Cowtown Punks ‘A Collection of Stories From the 80’s Denver Punk Scene (book)’
By Marquee Magazine on December 1, 2015 Uncategorized 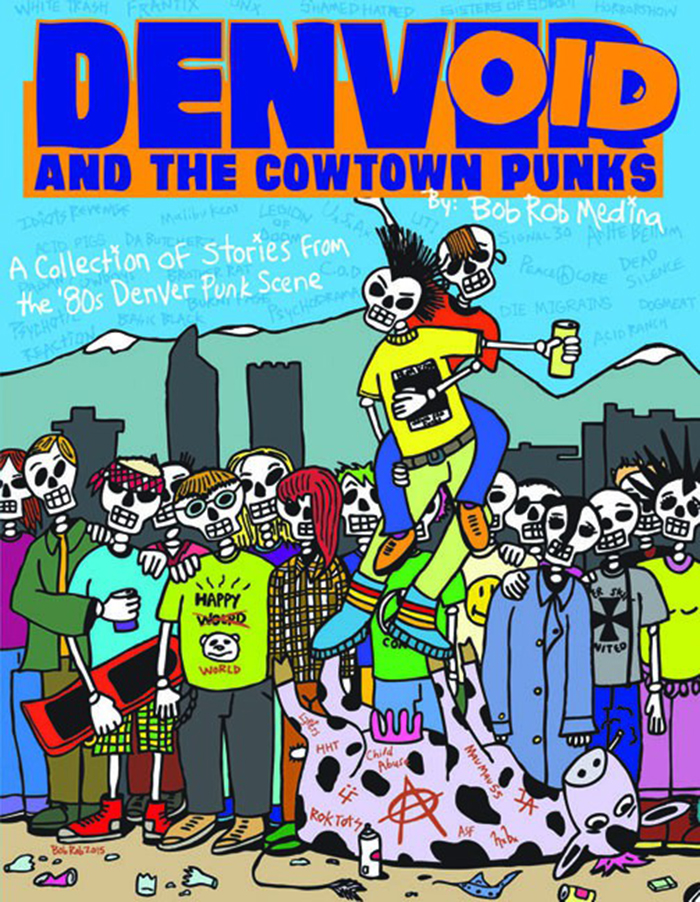 Denvoid and the Cowtown Punks

The opening foreword and the detailed two-page Denver Punk Band Family Tree graphic at the end of “Denvoid” are by themselves the most comprehensive collection of information about the early Denver punk scene that has been put together in one place in decades. And the 220-plus pages in between those two items collects an encyclopedia worth of information about the ’80s scene in Denver with a passion and depth that no one has touched. But author and Idiot’s Revenge guitarist and Donut Crew Records founder Bob Rob Medina stated outright when he started the project that the book isn’t meant to be a complete anthology. “It is simply an introduction as we all have our own story to tell,” Medina wrote. And maybe it’s not an anthology in technical terms, but “Denvoid” may be the closest the scene will ever come to a true documentary of that era.

Duane Davis of Wax Trax Records opens the book by explaining that in that time Denver was just part of a “vacuous delta of flyover country stretching from the East Coast to the West Coast.” But even in that “backward, out of it” cowtown there was a small group of dedicated punks who together worked to carve out a scene that would grow way beyond the confines of the early clubs and help to redefine Denver as a worthy tour stop for bands. With interviews of musicians, narratives of scenesters and an enormous collection of old handbills, posters and Medina’s phenomenal brush and ink drawings, “Denvoid” puts forth a lovingly detailed account of those days.

Medina starts the collection of stories with his own “How I Became A Punk Rocker In Less Than Fifty Thousand Words.” In it, he vulnerably and poetically,  tells the story of the struggles of becoming a Mexican-American punk rocker from the then very new, very white Denver suburb of Aurora. Medina gives accounts of growing up, being bullied and fighting back, the first time his friend Jimmy played him a punk rock cassette, the time his friend Al gave himself a mohawk in the school bathroom, and the things he and his friend would agree to do just so his mother would drive them to Wax Trax. The rest of the book with the tales of bands and venues and the scene at large, are educational and fun, but it’s Medina’s narrative that is the true gem of this outstandingly well-crafted collection of stories of a misunderstood sub-culture in a misunderstood era.