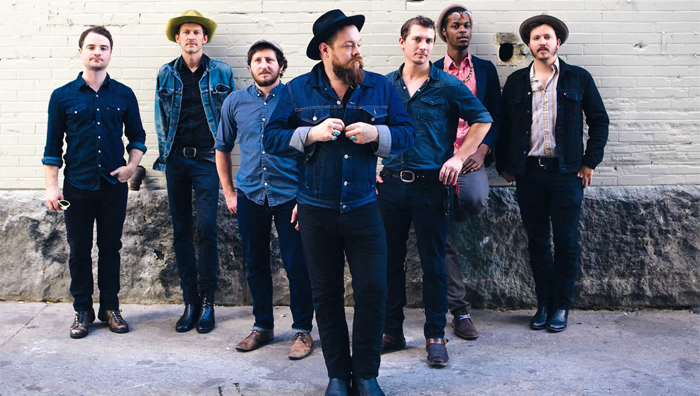 Nathaniel Rateliff’s breakout summer hit “S.O.B” was heralded as this year’s “Rolling In The Deep”— a ubiquitous classic soul revival tune that captivated the country. The song lead the Stax Records released album to #4 on the Billboard rock charts, with the single holding the #1 spot at Triple A Radio for four straight weeks. They’ve done a European tour, been written up in The New York Times, Rolling Stone and the esteemed British paper The Guardian. They’ve appeared on The Tonight Show, The Late Show, Conan (where he was mouth-kissed by the host) and everything from NPR’s Tiny Desk Concert to Austin City Limits.

But while Rateliff and the Night Sweats can now buy denim in bulk, the singer said that they still feel like any other struggling band, and that they’ve barely had the opportunity to take in all of the excitement.

“I don’t know. We’ve been working so much it’s really hard to gauge sort of where everything is at and you know as far as success goes, I feel like we’re all pretty broke, but at least people are into the music. But no, I haven’t really had a drop to my knees kind of moment cause I’ve just been so busy,” said Rateliff during a recent interview with The Marquee.

Rateliff’s not whining about the success by any stretch. He’s seen whirlwind tours and big press before, but the level of attention that the Night Sweats have gotten goes far above and beyond anything he had as a solo artist, or with his former rock band Born In The Flood.

“Years ago we were begging to have the attention we’re having now and we’re still having a great time it just seems like a lot at times,” Rateliff said. “It’s pretty intense. It’s tough to get shit done some days when you feel beat and tired. I get pretty anxious about things, but try to keep to myself for the most part. But yesterday we did a four song radio show, then a sound check and then a full show. And some days we do a radio show, a sound check, a party for another thing and then full shows. So it’s a lot.”

Luckily though, Rateliff is doing all of that with a group of friends and musicians that he’s known and worked with for years — some for decades. The Night Sweats include his longtime friend, roommate and collaborator Joseph Pope III, who plays bass,  drummer Patrick Meese, who once fronted his own namesake band, lead guitarist Luke Mossman, and keyboardist Mark Shusterman as well as a horn section that includes Andreas Wild (tenor sax), Wesley Watkins (trumpet) and Adam Shaffner (baritone sax).

Rateliff happily reported that when they’re on the road traveling through Europe and hitting the world’s great cities that they all stick pretty close to one another. “In other bands people split off and do their own thing, we tend to stick together for the most part and it’s nice,” he said.

Having a crew and an entourage to join him at each step is comfortable reinforcement for the former folk singer who told Rolling Stone that if the Night Sweats didn’t break there was a good chance he was going to go get a day job again and leave the touring life. While his solo work had gained some pretty strong critical acclaim [The New York Times called him a “folk pop hero”] Rateliff was in an odd limbo, making enough money to pay the bills, but not enough money that he could sustain himself without constantly being on the road. So the guy who worked for a decade at a trucking company in Denver while forging his early musical roots, often found himself day dreaming about a 9 to 5 where he could leave work at work. “I could have continued to keep touring on my own solo stuff, but it’s just a matter of how long do you want to struggle and how long do you want to feel discouraged? It’d be nice to do something that you feel happy about and feel comfortable doing and then go home at the end of the night and not have to worry about it,” he said.

Despite the recognition he had built as a solo artist, Rateliff wasn’t satisfied in his heart, and even this summer when it was already apparent that The Night Sweats were going to explode, Rateliff made it clear that he was catching up after years of struggling. The Night Sweats had returned to Denver’s hi-dive, the epicenter of activity for Rateliff’s last decade of music, and as the band played that short but sweet set, the singer stopped to raise a glass to the crowd and make a telltale toast. “Here’s to lost time, sacrifices and successes,” he said.

“Sometimes it feels like lost time,” he said in his interview with The Marquee. “But maybe it’s just a learning curve, you know? Looking back I could have done things differently but the end result is being where we’re at now, so I think that’s what’s important at this point.”

But Rateliff, like many artists before him was the “it” guy many times. In a number of different situations throughout his career, be it as a solo artist, or with his bands, people have been telling him that his next release would be a break-out hit and time and time again, even with some good successes chalked up in his favor, things ended up falling short of “the next big thing.”

So when he first started writing material for The Night Sweats and had people tell him that it was going to blow up, he took the words with many grains, if not many shakers, full of salt. “Well in the past we’d have records that we made that we really believed in or were really proud of and people that we were working with or surrounding us saying that this is going to be a big deal and then it ends up not being a big deal,” said Rateliff. “So you know I kind of,  even when we were making this last record, I was like ‘I like it.’ I knew that potentially it could be good success-wise, but I also thought of all of the other ones that we thought were going to do well too. So I just played this by ear to see how it goes.”

Now with an album behind them that has not only revitalized Rateliff but also the famed Stax Records label, the thoughts of a day job are at bay at least for the moment. And while 2016 won’t provide them with the opportunity to put forth a new record, Rateliff said he is working on new material, some of which they’ll play when the band returns to Denver for two sold out hometown shows this month.

“It’d be kind of crazy to do another album in 2016,” Rateliff said. “But I’m still working on new material for the Night Sweats. Having the opportunity to make another record with a leg up — with people already knowing who you are— there’s the potential people will actually buy the record just because they liked the previous record. So it’s a good start.”

Nathaniel Rateliff and the Night Sweats