Trending Stories from The Marquee
You are at:Home»Brian F. Johnson»All Them Witches Continue Their Adventure in Support of Their New West Records Debut ‘Dying Surfer Meets His Maker’
By Marquee Magazine on January 1, 2016 Brian F. Johnson, Cover Story, Features, Interviews 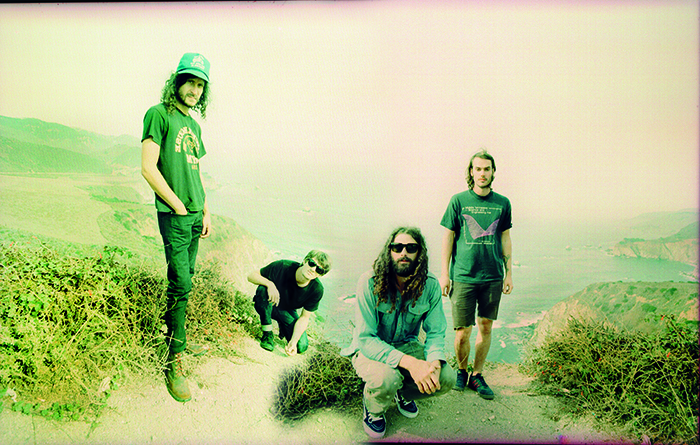 The annals of rock history hold countless tales of struggle for the life of a band on the road. Many bands wear their trials and tribulations on their sleeve, never missing the opportunity to tell people how hard it is to be a touring artist.

But Nashville’s All Them Witches have a completely different approach. They don’t pull the woe is me card because they don’t look at their time on the road as a struggle at all. They look at it with wonderment and gratitude and they don’t spend mile after mile bickering with their bandmates.

“We don’t have a lot of drama. I don’t know why that is,” said vocalist/bassist Charles Michael Parks during a recent interview with The Marquee, while the band traversed Michigan in their van on the way to a show in Grand Rapids. While All Them Witches has a dark sort of name, and plays music that Revolver described as a mix between the “spacy introspection of Pink Floyd, the down home groove of the Allman Brothers and the bong-addled whomp of Sleep,” when Parks talks about the inter-band relations they sound as wholesome as can be. “It’s pretty easy,” he said. “It’s nice knowing that four other people have your back in most situations. We joke around a lot and respect each other as musicians. It’s a lot of fun because nobody’s in charge and we just keep our hands in everything and make sure that everybody is happy with the decisions. Everybody gets a chance to take a step back and look at a situation and everything that is lopsided usually gets worked out.”

Just before Halloween, All Them Witches released their latest effort Dying Surfer Meets His Maker on New West Records. If Park’s comments already make the band seem chill, Dying Surfer makes them sound like they just ripped some tubes of indica. Parks said that if listeners are only expecting the raw, heavy riffing of the group’s 2013 release Lightning at the Door, they might be disappointed with Dying Surfer, which starts out with the quiet finger picking of “Call Me Star,” and sees the band pick up acoustic guitars over and over again throughout the album. That’s not to say that the rock basis that All Them Witches has forged is gone — quite the contrary, in fact — but Parks said it’s all part of their evolution. “We don’t think of ourselves as guitarists, or keyboardists or whatever. We think of ourselves as musicians and that’s true. We’re not a rock band. We’re a band. We’re musicians that appreciate a lot of music and draw from a lot of influences. I can’t imagine playing in a band where it’s like ‘O.K. We’re going to be this kind of band for the rest of our lives.’ It doesn’t make sense. Our music changes as we change as people, and this is just where I am at this point in my life. Maybe next year it will be different. We’ll see. Maybe we’ll turn into a hair metal band, which will take a while because I just cut all my hair off.”

All of that said, while “Call Me Star” opens Dying Surfer up on a rather subdued note, All Them Witches immediately counters with the exploratory instrumental track “El Centro,” and the heavily fuzzed-out “Dirt Preachers.” The band drifts back and forth through amp-taxing overtures to tracks like “Mellowing” which sounds like a lost extended acoustic introduction to Led Zeppelin’s “Babe I’m Gonna Leave You.” While “Mellowing” itself never erupts like Zep’s track does, there are several huge moments on the album and All Them Witches morph between those movements with ease.

Dying Surfer Meets His Maker was recorded in a cabin in the Smokey Mountains outside of the town of Pigeon Forge, Tenn., the home of Dollywood. In a press release that accompanied, the album Parks said “Pigeon Forge is tourist-central with Dollywood and moonshine distilleries, pancake houses and Christmas stores. But our cabin was up on the mountain. We were the only ones there. We didn’t have to worry about anyone calling us in for being loud. It was quiet. In the morning, the mist would be hanging over the city, then it would clear up and you’d see all these terrible tourist shops. It was nice to know we didn’t have to be part of it. There’s a duality that happens throughout this record, that of the solitude of the mountains and the absolute Babylon that is Pigeon Forge.”

But Parks said that some of that may also have to do with he and his bandmate’s ability to find home in the strangest and most foreign of places. “I hardly ever know where we are when we’re on the road, but I never feel lost or anything. Even the middle of nowhere feels just as much as home as being at home does. We see so much of it. We see more of nothing that we do of something all the time,” he said. “But really it isn’t nothing at all. ‘Nothing’ is like trees and beautiful landscapes and weather and animals and interesting things to look at. A lot of people see that as nothing and I don’t really understand that. I’m grateful that I get to see so much of this country and see how beautiful it is. A lot of people don’t get to see that and it’s really an amazing experience driving back and forth and getting to see all of these states and people from different cultures. It doesn’t feel like nowhere. It feels like an adventure all the time.”