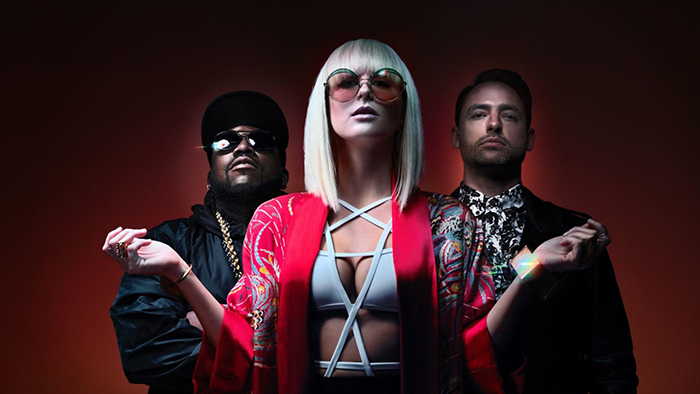 For the godless, irreverent heathens, the seven deadly sins are a list of shameful qualities that the Catholic Church believes condemns souls – pride, greed, lust, envy, wrath, gluttony and sloth. However, Big Boi, also known as one half of famed hip-hop duo Outkast, and the psych-pop duo Phantogram, believe these sins are something to be embraced and celebrated. This past year the two decided to join forces for an unlikely pairing and create Big Grams, a collaborative effort, under which they’ve released a self-titled LP containing seven tracks, each one extolling their hedonism.

“Everything was going to be potent because you don’t need 15 songs and then you only have like seven bangers — everything was gonna be bangin’ top to bottom, no skips no nothing, and we just focused on that,” Big Boi told The Marquee during a recent interview with all of the members of Big Grams. “That’s why every song is so potent like that cobra venom. Ya feel me? Like once it’s in, that’s it – that’s it!”

Outkast made its debut in the mid-’90s with a funky, contemporary style that broke molds in the hip-hop scene — especially coming from the south. Their inimitable sound was eclectic, featuring unique rhyme patterns and creative lyrics, leading to widespread recognition in the mainstream. Six Grammys, 25 million records sold, and countless awards later, Big Boi has continued to push the creative envelope further by working with diverse artists and blending genres. So when he came across Phantogram’s hit track, “Mouthful of Diamonds,” a while back in an online pop-up ad, he was intrigued and decided to post it on his website.

“I loved the quirkiness of the beat and then when I heard Sarah’s vocals it gave me chills,” he said, referring to Phantogram’s Sarah Barthel. “It just sounded like something brand new that I hadn’t heard before and I’m just a fan of great music, so I immediately put it on my BigBoi.com as a ‘Jam of the Week’ and that started the whole process.”

Unsurprisingly, Barthel and her Phantogram bandmate Josh Carter were stoked. The duo contacted Big Boi and soon they began collaborating with the hip-hop icon for three tracks on his 2012 album, Vicious Lies and Dangerous Rumors. After Barthel was able to recover from the initial awe of working with the living legend, she said they quickly became friends and developed a working chemistry at Outkast’s Stankonia studio in Atlanta. In the studio they bonded, developed an organic relationship and ultimately the trio agreed that Big Grams was inevitable.

“Phantogram has a very strong hip-hop influence in our sound, so it was very natural to produce a lot of stuff for this project and I’m just a big fan of hip-hop in general,” Carter told The Marquee. “But one thing I would say is working with Big and working at Stankonia has had a big influence on me as a producer incorporating more 808s. Before, I guess I used to be a little bit more into the boom-bap, kind of New York sound and now I’m developing more of a blend of the 808s mixed with that – I always loved on Outkast records that deep bass and that snare that was like almost a little too loud, ya know?”

Although Phantogram has been described using adjectives ranging from street beat, psych-pop, to electronic rock and synth-pop, the Big Grams record definitely seems more geared toward hip-hop allowing for Big Boi to do his thing. But the Phantogram sound is distinct and Barthel is as much of the vocal focus as is Big Boi. On tracks like, “Goldmine Junkie,” she trades verses and roles with Big Boi, lending herself to some subtle rapping, while he sings on the hook. But aside from her verbal contributions, Barthel said she too is involved in the production process.

“Josh taught me how to produce when we first started Phantogram,” Barthel said. “I didn’t know how to lay down my ideas, I didn’t know how to use any programs, so Josh taught me how to basically do everything and then I just got more involved in it. With our last record, Voices, I’m proud to say I produced “Black Out Days” and it has just kind of pushed me to be more involved with it. It’s kind of like the blueprint of Josh’s ideas, but it’s fuckin’ awesome to be inspired by him, I mean he’s my favorite producer, so it’s great having your favorite producer teaching you. I was a part of the production for the Big Grams stuff too, which was so cool to be doing that stuff with Big Boi and Josh.”

The Phantogram creative touch is also evident in their music video for “Fell in the Sun” where psychedelic visuals, cascading lasers and fog envelope Barthel and Big Boi while Carter plays an MPC drum machine, an aesthetic they recreate during their live show. The group said they will be releasing animated videos for two other tracks on the album, “Born to Shine” and “Run for Your Life,” which were made in coordination with Adult Swim on Cartoon Network. They also plan to put out a music video for their track, “Drum Machine,” which features production from Skrillex.

The chemistry and camaraderie that the group talks about is evident when speaking to the artists. The comical and humorous nature of Big Boi’s rhymes is clearly reflected in his contagious demeanor. Midway through the interview he stopped to tell a laughing Barthel about a recent encounter he had with Phantogram’s music on his own. “Actually I didn’t tell you guys, but I’ve been hearing some of your stuff when I go to the gym. Sarah, you just pop up on the screen and it’s a video I hadn’t seen, like, ‘What the fuck is this? Hell yeah!’ – this fuckin’ video showin’ up, I be like ‘God damn!’ Everybody be in the gym jamming like a mothafucka. Like, I was in there last week — I meant to call you — I was on the elliptical and this shit popped up and I’m like, ‘Damn, this shit is everywhere.’ So yeah man, we cover the globe,” Big Boi said.

The seven deadly sins theme has an undeniable sense of humor to it as well, with sexual innuendos and phallic references from Big Boi and Carter. Barthel even drops bombs on tracks like, “Born to Shine,” aggrandizing gluttony and excess, which also features verses from Killer Mike and El-P of Run The Jewels. The album’s theme is illustrated not just in its lyrics and sound but also in the artwork, showing two gold-painted women caressing each other in a depiction of lust — a sin the trio said they share in common.

“I’m guilty of whichever one that’s got to do with fuckin’,” said Big Boi. “You really can’t call that a sin though, because I’ve got a wife so it’s really not a sin. It’s really a good thing. I guess I got a little gluttony too, you got to mix that gluttony in with that lust because I like to eat too.”

Barthel chimed in, “We should have just named the record Gluttony and Lust.”

The playful banter and exchanges between the trio show a working relationship that seems to hint at continued collaboration in the future, but for now Big Grams is taking its show on the road, starting with a co-headlining slot at Red Rocks for “Winter on the Rocks” in January.

“This record was just free-flowing and that’s just the way we always approach music, but working with Josh and Sarah and all the electronic sounds, vibes and ghostly things, we have a lot of ideas that we have left on the table,” Big Boi said. “So between the next Phantogram record and the next Big Boi record we’ll be just kind of dropping Big Grams songs in the bucket to have ready for the people because they want more.”

Icelantic’s Winter on the Rocks