Trending Stories from The Marquee
You are at:Home»Cover Story»Fruition Surprise Fans With a Recent EP and a Forthcoming LP — Back-to-Back Release
By Marquee Magazine on January 1, 2016 Cover Story, Features, Interviews, Timothy Dwenger 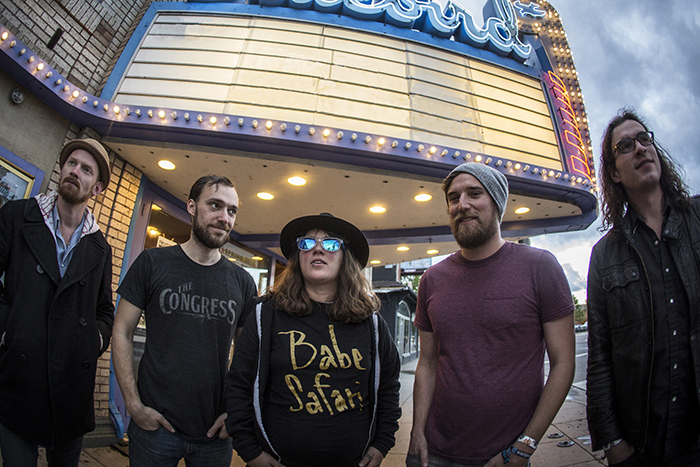 At the risk of being trite, it seems like things are coming to, well, “fruition” for the Portland, Ore. based band of the same name. Eight years into their career, but only four into serious touring, they have proven themselves on the Americana music scene by garnering significant critical acclaim and thrilling rapidly-growing audiences with their constantly evolving and progressive sound. While rooted in the string band tradition, Fruition blends drums into the mix and pushes the boundaries of bluegrass into the realms of rock, and with their upcoming full length release, they take it even further into psychedelia.

When The Marquee caught up with three fifths of Fruition, Kellen Asebroek, Jay Cobb, and Tyler Thompson, on a Skype video chat, they were just coming off two amazing shows in Mexico at the Strings & Sol festival but hadn’t yet returned to the States. “We are at a Cenote, which is one of these places that are all around Mexico. It’s where the humidity and the rainwater soak through the limestone and create the epic crystal clear underground pools that can be hundreds of meters deep and they are amazing,” said Asebroek as he sipped on a cocktail at the edge of a tranquil pool of water.

Though there was some work for Fruition in Mexico before they got to really kick back and relax, it didn’t sound like their two sets at Strings & Sol had been particularly taxing. On Friday night of the festival Asebroak, Cobb and company were sandwiched between Railroad Earth and Greensky Bluegrass for a mainstage set that featured guest appearances from Anders Beck of Greensky and the legendary Sam Bush. Then, on Saturday, they played a late night set that featured a highlight of the weekend for Cobb. “I’d never met Larry Keel before and after our mainstage set he came up to me and introduced himself,” gushed Cobb. “Then he came and jammed with us on our late-night set along with a million other people including Tim Carbone, and Bonnie Paine and Dan Rodriguez from Elephant Revival, but it was really great to play guitar with Larry Keel.”

From the sound of it, this trip to Mexico was a well-deserved vacation after almost two years of very hard work that included countless nights on the road (which don’t seem to be slowing down anytime soon) and about eighteen months of writing and recording new material. “We spent the last year and a half recording a bunch of music and from those sessions we created an EP that we just released and an LP that we are going to release in the spring,” said Cobb.

The five song EP, Holehearted Fools, dropped in early November and was a complete surprise to fans. “We did it with no publicity and no warning at all,” said Asebroek. “As soon as we got the CDs in hand we made sure they were on iTunes and Amazon, and then we woke up in the morning and said ‘Surprise! Here’s some new music. Sorry it took us so long.’ People have been asking for new music for almost two years now so they knew something was coming, but it was nice to be able to say ‘Here you go.’”

According to Cobb, this five song collection serves as sort of a bridge between the Fruition sound that fans are intimately familiar with, and a relatively new direction for the group. “Whether you are trying to organize an EP or an LP it all has to do with flow, and with this EP we wanted it to serve as an introduction to what the actual LP is going to sound like,” he explained. “We ended with ‘Sanctuary’ and that’s way different than anything we have ever put out before and the album is going to have more stuff like that on it — stuff that we’ve never done before.” Asebroek offered a little more detail when he said “the full length we are about to put out is more on the rock and roll/soul and, in a lot of ways, psychedelic end of the spectrum.”

While several of the cuts on the new album will be familiar to fans who’ve seen the band on the road over the last couple of years, Asebroek confirmed that they are “saving two or three of the tunes until the LP is released so that when fans get the album they are like ‘Oh shit! I’ve never heard this song!’ I was like that when I was buying CDs from bands I liked. It’s always exciting to hear brand new shit.”