Trending Stories from The Marquee
You are at:Home»Cover Story»Aoife O’Donovan Brings Everything Around Full Circle to Her Family and Her Roots on Yep Roc Release ‘In The Magic Hour’
By Marquee Magazine on February 1, 2016 Cover Story, Features, Interviews, Sarah Baranauskas 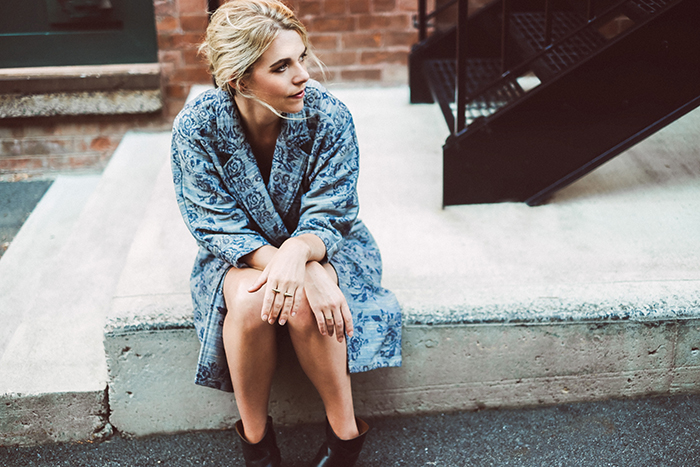 “There’s a beautiful tradition in Ireland where members of the younger generation carry the coffin at a funeral and lower it into the ground,” said singer/songwriter Aoife O’Donovan describing her own grandfather’s funeral, during a recent interview with The Marquee.

O’Donovan paints a vivid picture. “All of his granddaughters who were at the funeral — and there’s only seven granddaughters out of his 27 grandchildren —  they were the ones who shouldered the coffin and walked with it. My mother sent me a picture of my sister and the other cousins at the funeral with his coffin. It was such a beautiful image.

Life’s passages figure heavily into O’Donovan’s second solo album In the Magic Hour (released January 22 on Yep Roc Records). Her songwriting captures both the restlessness of childhood and the restfulness of old age as the wheel turns. Meanwhile, the sound draws on her old world Irish roots but continues to explore the new world musical landscape she’s trod since her days as the principle singer/songwriter of acclaimed progressive Americana string band Crooked Still.

This tension between wonder and wisdom, tradition and exploration, winds through the album from the lonesome opener “Stanley Park” to the haunting post-apocalyptic love song “Jupiter.” But it is especially apparent in the album’s centerpiece “Magpie.”  As O’Donovan explains, “[The magpie] here is a symbol of rebirth. It’s not just a song about my grandfather passing away. It’s also a song about travel. It’s a song about traveling back to a certain place as an adult and reliving the memory of being a kid there.”

O’Donovan’s childhood memories of Ireland served as inspiration for many of the songs on In the Magic Hour. The oldest of four kids, she was raised in the suburbs of Boston by musical parents with deep Irish roots. Her father grew up in Ireland and to this day hosts an Irish music radio show in Boston. But both O’Donovan parents were eager to keep the connections to family and heritage strong beyond just introducing them to the Irish musicians that would stay with the family while touring stateside. Her parents scrimped and sacrificed so the family could spend their summers with relatives in the seaside village of Clonakilty in County Cork. Besides building strong familial bonds, these yearly trips instilled a love of music in O’Donovan from an early age.

“Singing was such a huge part of our life,” she said, joyfully describing those childhood summers. “No matter what, every night you would get together at a pub or at somebody’s house. The guitar would get passed and my mom would play the piano and we would have ‘sing songs’ where we would just sing for frickin’ hours.”

One of those songs made it onto the album, the traditional “Donal Og.” “My mom and dad used to sing that,” O’Donovan explained. “It’s a beautiful old poem.”

O’Donovan and producer Tucker Martine initially tracked the song live in a church in Portland, Oregon during the sessions for In the Magic Hour. There’s a starkness to the arrangement that lends itself to the heartbreaking words:

“For you’ve taken what’s before and behind me

East and west when you would not mind me

Sun, moon and stars from the sky you’ve taken

And god as well if I’m not mistaken”

But, during mixing on the track, O’Donovan recalled a recording her father had taken of her grandfather singing. She had Martine incorporate it towards the end of the track. It’s a powerful moment, giving literal voice to the man who’s been introduced only conceptually in earlier songs.

This speaks to the creativity of the recording sessions with Martine, who also produced O’Donovan’s 2013 album Fossils. Whereas Fossils was recorded live with her band, song arrangements fully fleshed out ahead of time, the songs for In the Magic Hour were “skeletons,” as she described them.

“I wanted to work with [Martine] again but with a starker batch of songs that hadn’t been arranged, or even been imagined, in their full form,” O’Donovan recalled. “I feel like myself and Tucker really built these songs up together, which was an incredible experience. He’s not only a great producer but also a great musician. He has such a keen instinct and was able to call in musicians from Portland that he knows for the sessions. He created a landscape that I’m really pleased with.”