Trending Stories from The Marquee
You are at:Home»Brian F. Johnson»Dressy Bessy Comes Back With Their First Album in Eight Years: ‘Kingsized’
By Marquee Magazine on February 1, 2016 Brian F. Johnson, Cover Story, Features, Interviews 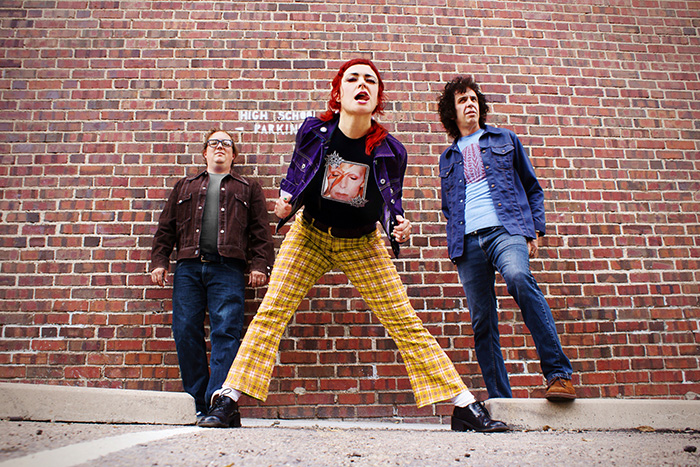 Usually when a band sort of disappears for the better part of a decade, the chances of a re-emergence dwindle to Powerball-like odds. But Denver’s Dressy Bessy — who hasn’t had a full release in eight years, has not only hit the magic numbers, they’re also doing so with a new album, a deal with Yep Roc records and an energy that is just as charged and electrifying as it was when they started back in 1996.

“It wasn’t planned,” said the always sparkly Tammy Ealom during a recent interview with The Marquee. “We didn’t say ‘We’re going to take eight years off now,’ you know? It’s been a little bit since we had a release, but we haven’t gone anywhere.”

The group, which had debuted 20 years ago on the Kindercore label and was once called the “allstars of sunshine pop” by CMJ, put the brakes on shortly after the release of Holler and Stomp, and as Ealom explained, it was sort of the equivalent of a large bubble gum bubble popping in their face. “Our last album came out in 2008 and unfortunately it came out right during the housing crash and the ‘big election’ and this and that and it sort of killed us a little bit. When it first came out we did some extensive touring but gas was so high we couldn’t afford to do it anymore and people weren’t coming to our shows. I don’t think it was because of anything we did or that we sucked, I think it was just unfortunate timing and it was unfortunate too because the band was really strong and we think the best we had ever been live and we just had to stop there for a little bit.”

Ealom continued, “When we came home too it seemed like, O.K. we did this big set of tours and usually you can stretch that out for a couple of years and then start thinking about starting a new release. But I wasn’t ready for it to be done yet. So I came home and spent two years making videos for every song on that album which kind of got it out of my system and then I was like ‘O.K. That’s cool. Now I guess it’s done in the artistic sense of the word.’”

Dressy Bessy, which includes guitarist John Hill (also of Apples in stereo) and drummer Craig Gilbert, released the videos and a few years ago, they put out a digital-only release, but the group was very much out of the spotlight. Then in January of 2014, the floodgates of creativity opened again and out came pouring the new songs that would eventually form Kingsized, which will be released February 5.

“I’m lucky enough to be surrounded by people who believe enough in what we’re doing that during the downtime they were there and ready to go. It takes a lot to commit a lot even when there’s not a lot going on. But [Dressy Bessy] is my thing. It’s just what I do and I don’t trip on it. I don’t try to force anything. If it comes, it comes, when it comes, you know what I mean? So I’m always going to be writing songs. It’s just what I do and it truly makes me happy and keeps me grounded,” Ealom said.

Despite the time between records, Kingsized doesn’t sound like a “new Dressy Bessy.” It sounds like Dressy Bessy, period. The bubble gum power pop is still there along with their Wonka-like pop aesthetic. But the album also has some grit to it as well, that is featured a bit more prominently than on releases past.

“We’ve always considered ourselves a rock band,” Ealom said. “Since the beginning we’ve always been pegged as this cutesy sort of bubble gum pop sort of thing and I’ll take some credit for that because I’m also in charge of the visual aspects of our band. But, you know, it’s not intentional. I don’t think cute is something that you can create and make up. It’s a legitimate sort of thing that sort of comes along, but we’ve always thought of ourselves as a hard rocking band. Everything comes straight from the gut.”

And while Dressy Bessy has as much of a chance of shedding their bubble gum pop label as, say, The Ramones do of quashing their punk categorization, Ealom is dead-on that many of the songs on Kingsized are straight up rockers. They may be rockers that still have some sugary sweet toppings, but they’re still rockers nonetheless. “These Modern Guns,” “Kingsized” and, in particular, the album’s closing track “In Particular” are all wrought with fuzzed-out riffs. “In Particular” even gets a bit dark with its almost stoner metal sludge foundation, ample feedback and Ealom chanting “Kill, kill, kill, kill, kill, kill. Fight!” It’s the closest Dressy Bessy might ever get to a song worthy of devil-horn rock salutes.

Ealom said that part of that harder emphasis might come from the departure of the group’s bassist of 17 years Rob Greene. “When he exited it kind of gave me the opportunity to play bass on the songs and afforded me the chance to look at the songs and say, ‘You know, listen, let’s ask some friends to see if they want to perform on this album and so we just asked and were lucky enough that everyone we asked agreed,” she said. The guests range from R.E.M.’s Peter Buck to Polyphonic Spree’s Jason Garner, The Minder’s Rebecca Cole, and Hill’s bandmate from The Apples in stereo Eric Allen.