Trending Stories from The Marquee
You are at:Home»Cover Story»For the Celebrated Jazz Guitarist Everything Leads Back to Denver
By Marquee Magazine on February 1, 2016 Cover Story, Features, Interviews, Timothy Dwenger 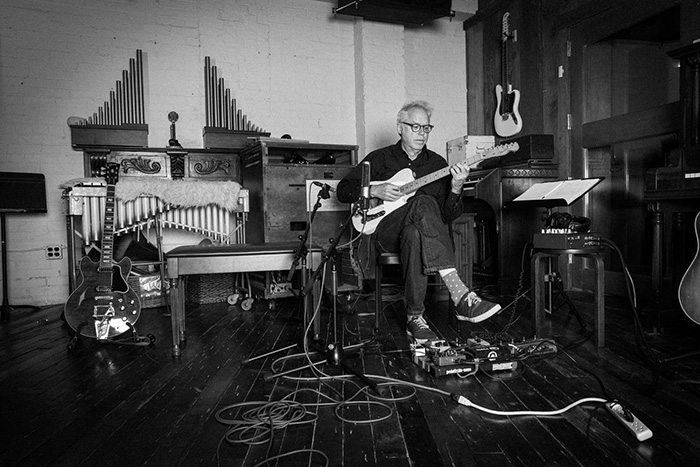 The jazz scene’s of the ’20s and ’30s centered around cities like New York, Chicago, St. Louis, Kansas City and New Orleans, and the city that often gets left out of the mix is Denver. Denver, with all its “Cowtown” history, has a storied past in jazz that even earned the Five Points neighborhood the moniker “Harlem of the West” in some circles due to luminaries like Billie Holiday, Duke Ellington, Miles Davis and many more frequenting the 50-some clubs that dotted the North East Denver neighborhood. It was a beacon of culture at the gateway to the Rockies for many in the Golden Age of jazz.

While today Denver’s jazz scene isn’t as vibrant as it was 60 or 70 years ago, a brief conversation with one of the most celebrated jazz guitarists of the last thirty years, Bill Frisell, proved that Denver’s connection to the modern jazz era is alive and well.  In fact, for Frisell, whose family moved from Baltimore to the Mile High City when he was very young, all roads seem to lead back to Denver.

“Everything came from there for me,” said Frisell in a recent interview with The Marquee. The musician, who now lives outside Seattle and is an Affiliate Professor of Jazz Studies at the University of Washington continued,  “When I was nine years old someone came around to my class in school and asked ‘Does anyone want to play any instruments?’ So that’s when I started playing the clarinet in the school band and then I joined Denver Youth Musicians. I just feel like I was so lucky. Music was, for me — I just can’t imagine not having it. I would have gone nuts or become some horrible criminal or something. Music was where I felt like I could be myself and the whole community in Denver was incredible.”

According to Frisell, with the emergence of rock and roll music and, specifically, The Beatles, the electric guitar quickly became the most sought after and popular instrument to play. “I got a paper route, saved up my money, and finally got an electric guitar,” he remembered. “Then a friend across the street got one too so we automatically had a band and we learned a few songs and then we were playing for parties and that’s kinda what I’ve been doing ever since.”

While Frisell’s time in the Denver school system contributed significantly to his musical leanings, the  city’s jazz scene also proved to be very influential in his life. “The very first jazz concert I ever went to was at Red Rocks and it was Thelonious Monk, Cannonball Adderley and Gary Burton’s Quartet and that just blew my mind. I was playing Temptations’ songs and I was really into blues and stuff like that and then I heard this music and I was like ‘What is going on with this?’” Frisell said, referring to the Schliltz “Salute To Jazz” concert at Red Rocks in July of 1968.  “In Gary Burton’s band I was hearing something that I had never heard – well I’d never heard any of it before – but there was this sound and I couldn’t figure out what it was. I started buying all these records and started to notice this name, Michael Gibbs, on the back of those records. He wasn’t in the band but he was writing a lot of the music. So I started to think that he had something to do with what this stuff sounded like. A few years later I left Denver and went to Boston to music school and I couldn’t believe it when I got there that this guy Mike Gibbs was teaching at Berklee. I was like ‘Oh my god, that’s the guy!’  I took all of his classes and then I ended up playing in his student band and when I got out of school he started calling me for gigs in Europe and New York.”

The relationship didn’t end there and, in fact, Frisell was rehearsing in preparation for a pair of concerts at the University of Washington with Gibbs when he spoke with The Marquee.  “He’s living in Spain and I got him to come all the way over here to do these concerts with the university orchestra and the big band. So he’s arranged some of my music for these shows,” Frisell said excitedly.

Ever active, Frisell has dates booked this winter with not only Gibbs, but legendary sax player Charles Lloyd, Wilco, and the band with whom he recorded his most recent release When You Wish Upon A Star. As Frisell began discussing his new record another Denver connection made itself known. “A drummer named Rudy Royston is playing on this new record and he grew up in Denver but he won’t be on the first leg of the tour when we play there,” Frisell said before going on to explain why he chose TV and movie themes as the subject of this record. “There’s no escaping the fact that we grew up with television. I know very few people who haven’t been polluted with television.  What I saw on TV and in the movies is so much a part of what formed my musical imagination,” he shared. “A lot of the music that I chose for this thing goes back to my memories of driving downtown in Denver right after I got my license to see a James Bond movie, or driving to Boulder with my family to see To Kill A Mockingbird, or going to see Psycho downtown with my friends and everybody is flipping out. There is so much that goes back to Denver that I guess the record is sort of autobiographical.”

With so many connections to Denver it’s no wonder that Frisell keeps returning to town. It’s the place where he began to foster his musical spirit and learn about the genre that thrust him into the national spotlight. Along the way he met men like Denver’s own Ron Miles, who Frisell now considers a very close friend, and formed a lasting relationship with Dazzle Jazz who promote many of his local concerts including last year’s show at his alma-mater East High School. “So much of it started in Denver,” he said.  “Well, I guess it all started there. Whatever has happened to me so far has these direct connections to Denver.”

Bill Frisell Charles Lloyd Denver Mike GIbbs When You Wish Upon A Star
Cool, Share this article: Twitter Facebook Google+ Pinterest LinkedIn Tumblr Email
Previous ArticleAoife O’Donovan Brings Everything Around Full Circle to Her Family and Her Roots on Yep Roc Release ‘In The Magic Hour’
Next Article Dressy Bessy Comes Back With Their First Album in Eight Years: ‘Kingsized’