Trending Stories from The Marquee
You are at:Home»Album Reviews»My Body sings Electric ‘Franklin Tapes: Side B’
By Marquee Magazine on February 1, 2016 Album Reviews, Brian F. Johnson 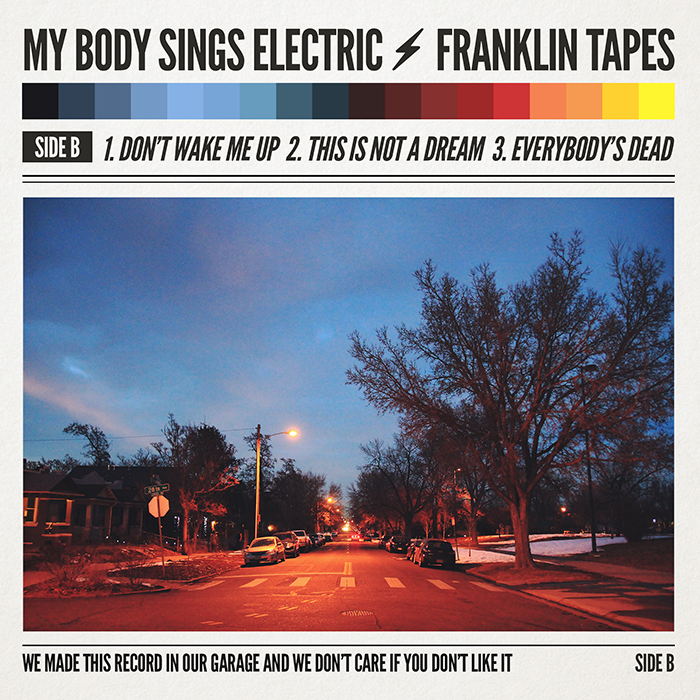 Franklin Tapes: Side B

Late last fall, Denver’s My Body Sings Electric released Side A of their Franklin Tapes album. The band had broken the full album into two digestible EPs, and this month they will release the remainder, Side B.

The band explained in a press release that accompanied the EP that their goal was “to completely disrupt the way they had done things in the past,” in an effort to make their most “honest” release.

My Body Sings Electric broke off into individual and small brainstorming groups to develop the material, and the band taught themselves to engineer and track almost the entire record out of their garage studio. They even went so far as to brazenly put on their cover “We made this record in our garage and we don’t care if you don’t like it.”

The songs on Side B are all deeply autobiographical modern pop rockers. “This is Not A Dream” is an apology from singer Brandon Whalen to his wife for spending so much time on music. “Don’t Wake Me Up” is about the good times on the road, and “Everybody’s Dead” is the proverbial fuck-you to the music industry, and well, pretty much everyone in California. But the entire release signifies a “we’ll do it ourselves, on our own terms,” attitude, which gives the record a feeling of boundless freedom and limitless possibilities.