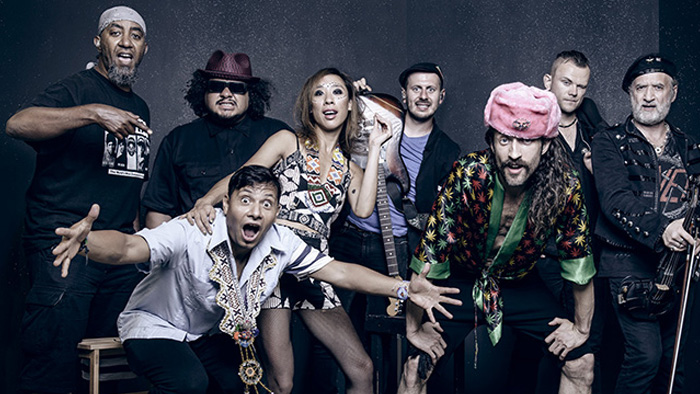 “Imagine 100 channel sound board and each channel is song in a stage of development. The wheel is rolling, you know, at all times. It’s not really dictated by any kind of schedule if I don’t feel like I’m not crystallizing any thought I don’t push it,” said Eugene Hütz, the chief instigator and provocateur of Gogol Bordello for the last 17 years, in his tell-tale broken Eastern European accent. “I’m not like a workaholic of any kind, I just enjoy writing and knowing what’s in the cooker.”

Currently Hütz has a lot in his cooker. As the de facto cultural ambassador of Gogol Bordello, the Ukrainian-born rabble-rouser, who fled Kiev at the age of 13 to escape fallout from the catastrophic accident at Chernobyl, is optimistically charging toward his group’s latest release late this summer, with his characteristic excitement and enthusiasm.

“It’s pretty much in the final stages,” Hütz said during a recent interview with The Marquee. “I think it’s going to be out by end of summer. There is number of titles but it’s undecided which one is going to go fully on. But it’s got all the extractable G.B. experience of last two years as a personal evolution and as a group evolution. That’s essentially what’s happening,” Hütz said. “A group is a group. But at the same time everyone within the group is on a journey of their own and there is like this growth going on as a collective and as individuals and that fuels the record. I have my own trajectory and my craft of songwriting and then I bring it to the band and the band make this whole fucking other thing out of it. But it’s like ‘Oh wow, that’s what this is all about.’”

For almost two decades Hütz and Gogol Bordello have taken their Eastern European punk rock stomp-athon and multi-cultural sing-alongs to massive world audiences. Pitchfork called Hütz the “world party cheerleader” of “one of America’s most chaotically enthralling live acts,” and famed music critic Robert Chistgau said that Gogol Bordello is “the world’s most visionary band.” Their live shows are cathartic, sweaty mayhem, where Hütz — who as a youth was a distance runner with Olympic dreams — claims to cover about 20 miles a night on stage.

While their last album, 2013’s Pura Vida Conspiracy was considered subdued by some accounts, the patented Gogol Bordello raucousness was still largely front and center. But, Hütz said that the new album is going to kick things back up a notch or two.

“It’s a lot more playful,” he said. “Pura Vida Conspiracy was a bit more black and white — not good or bad, but just black and white. You know, like once in a while director goes and does black and white movie. That was like what it needed to be for the record and this one I feel like we’re on a humorous upswing like we’re coming out of the black and white introspective mode and out into the humor zone again — and it’s  just so essential for Gogol Bordello’s vibration.”

Vibration and energy are two recurring themes in any conversation with Hütz, whether it’s surrounding his music, or his displaced childhood.

“I wasn’t really asking for anybody to tear me out by the scalp of my pretty nice life that I was having as a kind of bohemian teenager back in Ukraine,” Hütz said. “I was already in the hit parade with my band back there and suddenly, boom shack-a-lack, I was in Italy washing cars and working construction you know like ‘What happened?’ I didn’t ask for it to happen. But I always think that I guess there is a sort of a certain destiny vibration in there and I was probably going for sort of one challenge or another in a different form, you know? Just a challenge that sort of makes you step up a bit on each and every level.”

Hütz’s latest challenge however was self-imposed when he decided to take on production duties for the new album. He explained that the group recorded the first side of the record in Washington D.C.’s Inner Ear Studio, where Fugazi recorded all of their records. But, for the second side, the group returned to its native New York to record in the hallowed Oscilloscope Laboratories. “Second side was recorded in a New York studio on Canal Street in the Beastie Boys’ studio, Adam Yauch’s studio. We’re always kind of particular where the recording takes place. I’m not a big fan, I don’t think anybody in the band is comfortable with a standard studio situation. So we gravitate to places that have a certain aesthetic behind them and it really makes a lot of difference in a studio that is threaded with lucid and genius humor of Beastie Boys. There are little notes and memorabilia and their scribbles are everywhere to be found and it adds so much to the atmosphere,” Hütz said.

Taking on production duties, even if it is in a studio that perfectly matches the band, is still not a simple undertaking, but Hütz said that it’s a full-circle to return to his life in Ukraine.

“This one I wanted to take entirely under my own wing. That also bring it full circle. That’s how it was always done really. Before I left Ukraine we were doing stuff like that. We made our own instruments and built our own stages with a hammer and nail out of plywood and played on the stages until they collapsed because we weren’t such good carpenters,” Hütz said, laughing.

He added that he was never nervous of the stage falling apart then, and he isn’t now in a figurative sense for the new record. “I’m not nervous at all. It’s just what it needs to be, you know? I mean that’s kind of the point of it is to come as a clear channel to deliver straight from the clear channel of our own, you know?” Hütz said. “It’s sort of the reason why it is inimitable is because it’s coming from our place. You can do that only from our place. You can imitate all the elements but there is no way you can spill the beans that way, you know? It’s simply who we are and it’s simply how my natural energy flows. It’s not like somebody wrote the script and I’m trying to make the ends meet. It’s like I’m writing the script and I’m only going to write something I like.”