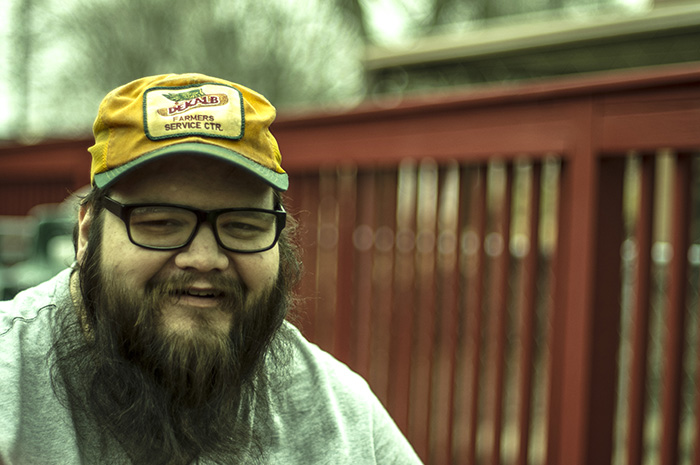 Singer-songwriter John Moreland may have recently turned thirty, but judging solely by the number of releases to his credit, the maturity of his songwriting, and the road-weary tone of his voice, one might think he’s been on this planet far, far longer.

Moreland’s songs flirt with country and blues, but at their heart they embody the essence of the folk tradition. He’s got a way of moving the soul with lyrics that dive deeply into the melancholy that haunts so many as his gruff, sandpapery voice creeps under the skin and lingers like lost love.  There are moments while listening to his most recent release, the 2015 breakout recording High On The Tulsa Heat, when ghosts of songwriters like Steve Earle, Townes Van Zandt, Jeff Tweedy, and Bob Dylan seep through the brilliantly penned songs.

Moreland’s songwriting career began inauspiciously at the age of 10 when he first started playing the guitar.  “I started writing when I picked up a guitar. That was the point,” he said during a recent interview with The Marquee from his home between legs of his current tour. “It was during the days of Green Day and Nirvana where everyone I listened to was writing their own songs so I wrote some of my own.”

While he started out playing in the hardcore and punk scenes of his hometown Tulsa, Okla., there was something about those genres that didn’t lend themselves to his style of songwriting. As he says in his bio, “in hardcore, there might be great lyrics in a song but you have to read them off a piece of paper to know it. I was 19 in 2004, and Steve Earle had put out The Revolution Starts Now, and I remember hearing the song ‘Rich Man’s War’ and totally feeling like somebody just punched me in the chest.”

With writers like Earle as his idols, Moreland has written prolifically over the last eight years and released at least six albums under his own name and with The Black Gold Band and The Dust Bowl Souls. While most of this recorded output flew criminally under the radar until recently, his sound was described perfectly as “gloriously and joyfully heartbreaking” by Farce The Music in 2013. Judging by the recent attention that High On the Tulsa Heat has gotten, the public is starting to take notice of Moreland’s work. “I don’t pay attention to sales at all but I know several people who found Tulsa Heat and worked backwards so I guess it’s made an impression,” he said before elaborating a bit on what he felt pushed this album into the mainstream: “good, honest songwriting, at least that’s what I hope it is.”

If lines like “Once I was enough to make you try / now I’m underneath the rubble / trying not to feel the trouble / and you don’t care for me enough to cry” from “You Don’t Care For Me Enough To Cry” and “Darling damn the luck and damn the consequences too / I could bury all the memories / I could patch up all the holes / But I’d still feel your fingers on my soul” from “Cleveland County Blues” are any indication, then good, honest songwriting is exactly what it was.

The sheer volume of songs that Moreland has released over the last several years might fool some into thinking that songwriting comes easily and pours out of the old soul. And while he admits that lines often appear in his head and he’s not always sure where his inspiration comes from, he clarified things a bit when he said “I’m not saying I’m a vehicle for this stuff, there’s a lot of work to it as well. In fact, I feel like Superman when I’ve finished a song. It’s such a great feeling.”

There may be a lot of work to it but, in the end, the finished product rolls off his tongue with a Springsteen-esque rawness that seems to pair so naturally with the painful messages that lurk in the shadows.

Moreland recently made his late night television debut on Colbert’s show with a heart wrenching performance of “Break My Heart Sweetly” from his 2013 release In The Throes and the line “I should be dealing with my demons but I’m dodging them instead” hung in the air long after the show had come to an end. As he discussed his songwriting process Moreland was kind enough to share the genesis of that poignant lyric. “It came from that feeling that I could be doing better in my life,” he admitted.  “There is a certain peace of mind that comes with doing your best and, in the end, I think everyone deals with that feeling at some point.”

As he enters his fourth decade on this planet, Moreland seems to be doing his best and, if he can go deeper into the well, fans are sure to be stunned with what comes next.

Cool, Share this article: Twitter Facebook Google+ Pinterest LinkedIn Tumblr Email
Previous ArticleThe Jerk of All Trades Returns With a New Memoir and an Album
Next Article This Will Destroy You Working on Secret Projects and Getting Ready for Return to Studio