Trending Stories from The Marquee
You are at:Home»Features»Ski Rockers Get Set to Release Debut Album ‘Cracks In The Sky’
By Marquee Magazine on March 1, 2016 Features, Interviews, Nessa Fried 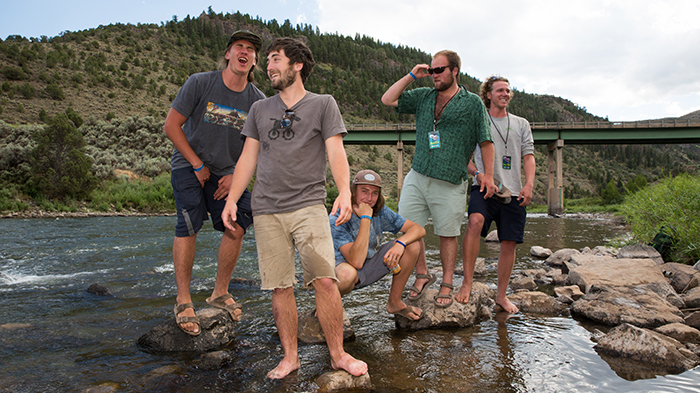 On an unseasonably balmy February afternoon, in the backyard of the Tenth Mountain Division house in the heart of Boulder’s Hill, a band of misfits are dressed in their Halloween leftovers. A retro ski bum, Spiderman and the rest of the ridiculously dressed band members are gearing up to shoot their first music video for their song “Eskimo” off of their upcoming debut release. The crowds roll in ready to party, waiting impatiently for the band to get down to business.

“We never take ourselves too seriously,” said guitarist and founding member MJ Ouimette, during an interview with The Marquee. “If we look like we’re having fun on stage it’s because we are. I think we bring everyone in the audience into our little club that we have and make sure everyone is having a good time.”

While a big part of that good time makes Tenth Mountain Division out to be a party band, the group has been working tirelessly to take themselves to the next level. With their album coming out this month, a festival time slot across the country and a mini East Coast tour, Tenth Mountain Division is trying to be more than just fun and games.

Cracks in the Sky is an illustration of the band’s journey thus far. Drummer Tyler Gwynn told The Marquee, that even the opening song “Morning Drive” is a depiction of the group’s evolution to date in a way. “It opens with just MJ on the guitar,” said Gwynn. He’s joined by Winston [Heuga on mandolin] because they started the band, followed by [bassist, Connor] Dunn, and then Cam [keyboardist Campbell Thomas]and I come in later. We’re taking time to tell our story with this new album. It gives us a chance to show where we’re at to this point, and where we’re going.”

Gwynn, who talked about how much the band has grown up in front of audiences, went on to explain that the band worked hard to make the difficult transition from live performances to studio sound. “We wanted to make sure the album brings that live energy everyone loves about us, but still have a precedent of song craft. These are the songs we’ve been playing at so many shows, but the album gives us a chance to sit down and look at individual notes to make sure this is how we want our staple album to represent us,” he said.

A big part of that discovery was the band coming together on what they wanted their overall sound to be. With all of the band members coming from such varied musical backgrounds, Tenth Mountain Division’s sound is a collective effort that is constantly transforming and progressing to highlight what they bring to the table as individuals. “Our roots are in bluegrass, but we wanted to explore different sounds especially with the addition of drums and keys,” says Ouimette. “We’ve always admired bands like Railroad Earth that don’t restrict themselves to traditional bluegrass, and allow the drummer to play to his potential rather than just keeping that less-entertaining simple bluegrass beat. Also, with my addition of electric guitar, our sound has evolved to be centrally rooted in rock, but we love to veer off into bluegrass tangents, where our original influences come from.”

The evolution from bluegrass to rock wasn’t an easy one according to Heuga. “For a long time it was very hard for me to blend my bluegrass sound into a rock band. I’ve only played new-grass my entire life,” Heuga said. “For a while it was frustrating because I felt my acoustic sound was getting lost in the loud rock. Since then I’ve really learned to mesh by dropping a lot of my bluegrass roots in mandolin, in favor of playing the classic role of the rhythm guitar in a rock band, which I dig. But I also miss playing choppy bluegrass.”

Ouimette and Heuga are both originally from Vail, and have thusly named their blend of Colorado bluegrass and rock ‘ski rock.’ “Ski Rock is a term we came up with that represents us and where we came from,” Ouimette explained. “It emulates how mountain towns are a hodgepodge of different cultures and communities getting together for their love of the mountain.”

Heuga added, “A lot of our music has to do with our love of the mountains. ‘Eskimo’ embodies the winter spirit we drive off of. The whole song is about the desperation for snow amidst the warm winters in Boulder, which is so different than the Vail winters we grew up in. I was walking around shirtless in Boulder on a warm February day and I screamed out ‘a man can go crazy in a search of snow,’ and the song just developed from that line.”

In addition to “Eskimo” the new album also features the song “Camp Hale” which is a shout out for the Vail Valley WWII training facility which taught ski warfare tactics of the Finnish Army to U.S. Army recruits. The founders of Vail were soldiers training in the Tenth Mountain Division, who had a vision for a ski community where they trained. “The training site is just outside where me and Winston grew up and we wanted to pay tribute to those that led to the birth of our hometown, so that’s where we got our band’s name,” Ouimette said.

With a debut album, growing recognition on the Front Range, and upcoming national exposure, TMD has much to look forward to, and graduation from school is one big obstacle that can’t come soon enough. “School is holding us back from opportunity,” said Heuga. “In order for a small band to get big we have to travel year-round and spread our name. Graduating will allow us to be full-time and have less distractions.”

“We don’t really know what’s going to happen,” Ouimette added. “But we’re going to focus on our Plan A and work on music that will attract crowds, so we can do this for the rest of our lives.”