Trending Stories from The Marquee
You are at:Home»Brian F. Johnson»The Jerk of All Trades Returns With a New Memoir and an Album
By Marquee Magazine on March 1, 2016 Brian F. Johnson, Cover Story, Features, Interviews 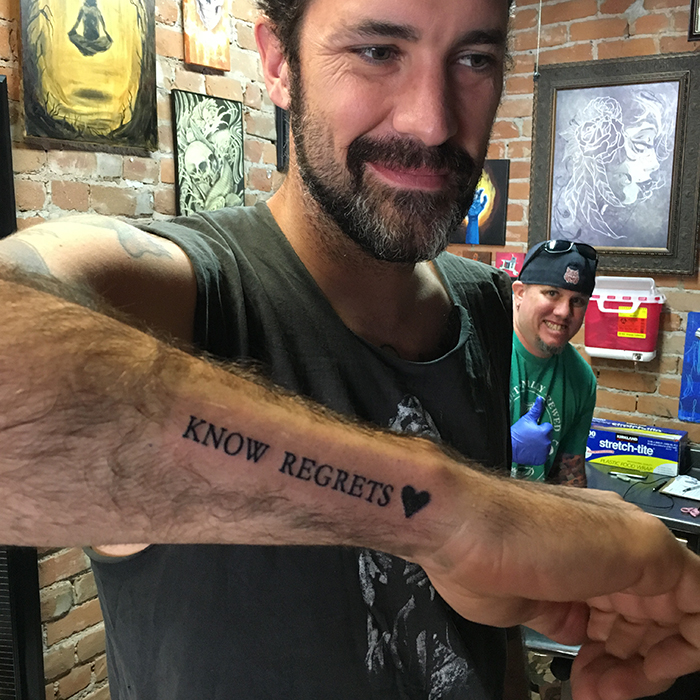 “Being sober and being in bars and playing your own drinking songs is kind of a recipe for disaster. That’s a great way to fuck it up,” said author, musician and recovering addict turned ultra-runner Mishka Shubaly. “But I haven’t fucked up. If anything this tour has obliterated my anxiety. Now I feel totally comfortable getting up on stage and being like, ‘What’s up you fucking idiots. Here’s a song for you to ruin your life to. It’s your fucking business. I don’t condone it. It’s not what I want you to do. You do what you want to do. If you want to be sober, you want to be a runner, I totally support that. I’m in your corner. I got your back. If you want to destroy your life, I don’t think that’s a great idea, but here’s the soundtrack.”

That soundtrack, Coward’s Path, has been kicking around since Shubaly was still drinking. “I was drinking so much when I was making the drinking record that I couldn’t fucking finish it,” Shubaly said during a recent interview with The Marquee. But years out of the haze now, after the tapes sat around in the corner with Shubaly uncertain of his relationship to the tracks as a sober person, the album — a eulogy for alcoholism and addiction — is finally seeing the light of day.

These days however it almost seems as if music is just another tool in Shubaly’s ever-expanding drawer. While Johnny Depp has somehow called his music “sublime,”  Robert Christgau, “the fucking dean of rock criticism,” who Shubaly once interned under, brutally reviewed Coward’s Path in just six words. “Mishka, you can’t sing. At All,” Christgau said, emphasizing the ‘at all.’

But damned be the critics, and honestly damned be the fans too, Shubaly is on stage for his amusement more than anything. “I’ve been doing more and more stuff on the road with comics, so my set is evolving to have fewer and fewer songs and more of me just talking shit to people between songs. People ask me if I’m a musician, a comic, a story teller; is this spoken word, and my response is ‘fuck you!’”

The young prodigy who attended college at 15 and was awarded the prestigious Dean’s Fellowship graduate scholarship from Columbia at 22, fell into drinking shortly after graduation. “Just days after we graduated my best friend in the writing program over-dosed and died. And that fucked me up, man. I was already so fraught with insecurity about my own writing and then to have a friend die like that — somebody that was older than me and smarter than me and much more well read and experienced. It scared the fucking shit out of me and it made me think that writing is useless and what’s the fucking point. And with 15 years on his death I can look back and say that’s exactly why we need writing to make sense of that darkness. Writing is the tool we use to understand grief, loss and sadness and pain and all the shit. But at the time it was just too much and I was drinking really hard and felt totally lost and moved into the van and toured a shitload and when that fell apart, I worked in bars and drank my wages.”

For almost two decades, in fact, Shubaly drank, leaving writing mostly behind until one day on the way to his construction job he learned that the New York Press was holding an open call for writers.

“I submitted a story that I had written on Myspace — because that was the era that we were in — about accidentally stabbing myself in the arm one night and having to go to the emergency room under a fake name and so I submitted that story and they liked it. And they looked at my Myspace blog and they were like, ‘You’ve been writing about this drug you’ve been doing you want to write something more about that in depth?” Shubaly explained. “So I came home from my construction gig, made myself another cup of coffee and sat down and just wrote this story about opana, this pretty hardcore opiate I was doing at the time. No revision. No nothing. I just emailed it in and the next week it was on the cover of the New York Press and I was a writer. I went on to write four or five cover stories for the New York Press in quick succession,” he said.

Shubaly has gone on to write six best-selling Kindle Singles, including The Long Run about “being a hardcore drunk for two decades and how I stopped drinking without rehab or AA, and how one night after a bar fight I was so angry when I went back to get my bike, I just started running and I ran the whole way there. And I was like, ‘I did a thing. I can do things.’ And I started running more and more and longer and longer and running became a tool that I used to get myself better,” he said.

His book, I Swear I’ll Make It Up To You: A Life on the Low Road which is being released on March 8, is Shubaly’s inevitable memoir. It is — if you will — his LP. The answer to all of his singles, or figurative EPs from the last several years. Some plot points from his life have been spoiled from his singles, such as the fact that he didn’t die and that he did get sober. But the book also delves deep into Shubaly’s past. It reveals that in 1992, just a day after surviving a mass shooting on his school’s campus he would learn his parents were set to divorce, and his father, a rocket scientist, would abandon his family which would then lose their home in foreclosure. “It just teed me up for 17 years of bitterness and rage,” Shubaly said. “And so I went back to figure things out and I found out that major, major plot points in my life — things that I had built my personality around — were totally wrong. That I had misunderstood them, or misheard them or experienced them in a way that wasn’t true.  And so much of this was doing this archeological dig, when you’re expecting one thing and you find something that’s radically different. So it is the story of me being an angry drunk and living off Colfax when I was 20 and getting bounced from a bunch of bars and it’s about running. But it’s also about my relationship with my old man and learning to see his side of things and learning to experience him not as capital ‘The Dad,’ but as a man and as a young man and then as a child; to see him as a person, as a human being — and that some of the decisions he made and some of the things that he did that I didn’t agree with that I was outraged about — that they had come from experiences that he went through as a child that I’ll never be able to understand. Radically different experiences than I had. So yeah, it’s fucking heavy, dude.”