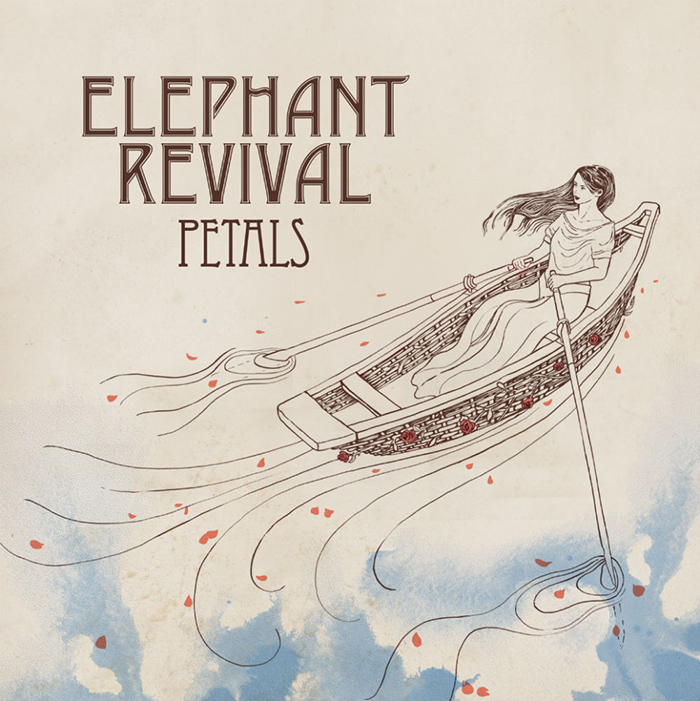 Elephant Revival has never had a problem expressing their feelings. The band may have more than a few light, kick-up-their-heels songs in their repertoire, but even the loftiest, most free-spirited of those songs has had some sort of poignant message.

For their latest release Petals, the ensemble has delved even deeper into their contemplative, ecumenical philosophies to create a rich tapestry of emotion, rhythms and spirit. The result is the group’s most intimate, profound and sincere album of  their decade-long career.

With an Ennio Morricone-like cinematic introduction the first few seconds of Petals set the band on a new journey that is at once familiar as well as wildly different from anything they’ve done before. Petals showcases a maturity far more developed than anything else in their catalog. The death of a close friend inspired many of the tracks on the album, but guitarist/vocalist Daniel Rodriguez is quick to point out that the album falls much more to the honoring and coping of that loss than the despair and darkness of the passing.

Rodriguez’s voice is as rich and thick as cigar smoke throughout Petals, but multi-instrumentalist Bonnie Paine’s stunning vocal acrobatics still take front and center of Elephant Revival’s sound. This album however sees Rodriguez and Paine uniting their vocals in similar fashion to their past works, but with additional years of the forged bond creating an intricacy and complexity that they have only hinted at until now. The album also sees Paine picking up a cello for the first time in a studio sense. While she’s been playing cello for years she’s not, until recently, performed with it and hadn’t yet recorded with the instrument.

Elephant’s other anchor, the fiddle work of Bridget Law, is carefully distributed throughout Petals. Whereas Law could be heard on earlier works soaring above each track, this new work highlights a restrained use of her gorgeous stringwork, and makes it so that each time she does come in it piques great attention.

Bassist, mandolin player and band co-founder Dango Rose is once again good for a curve-ball tune, and on Petals it comes through as “When I Fall,” an exemplary blend of Americana, folk and rock that gives the album one of Elephant’s infectious and notorious left-turns.

Obviously a great deal of the newness of Petals comes at the hands of the group’s newest addition, Charlie Rose, who brings with him new instrumentation like the pedal steel and horns, in addition to banjo and cello work.  Inside the disc’s packaging appears a photo of the group with two additional people, and while the band hasn’t grown it’s core quintet, the photograph gives nod to how they were joined by producer/engineer Sam Kassirer, who added piano, organ and drums on a few tracks, and also assistant engineer, Jonathan Corey.

Back when the group released Break In The Clouds in 2013, they took a series of promotional shots with larger-than-life smiles, projecting an exuberance with where they were in their career. Now, after a few more years, an insane amount of touring, and apparently a wealth of individual and spiritual growth, their latest shots show them more straight-faced. It’s not that they’re not smiling, but it certainly shows a more contemplative and grown-up side of the group, just like Petals does.