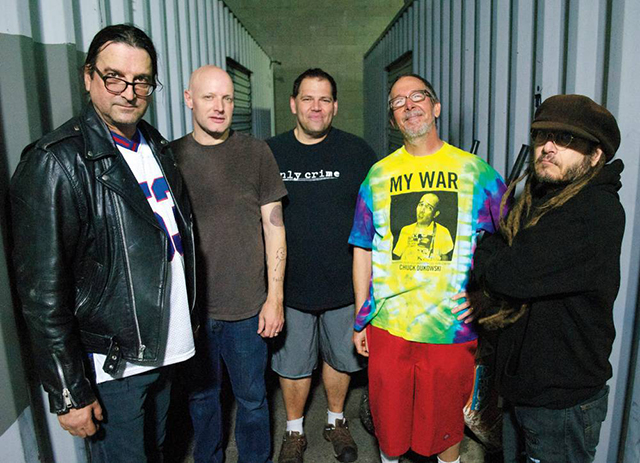 Keith Morris knows how he’s going to die. At least he thinks he knows, and in a weird very punk rock sort of way he’s preparing for it.

The punk icon and original lead singer of Black Flag lives in Los Feliz, a powder keg of energy in Los Angeles, and it’s a large contributing factor to how he’s going to go out. “I’m sandwiched between downtown Los Angeles and East Hollywood, right at the start of the Hollywood Boulevard. It’s pretty nasty. It’s pretty ugly,” Morris said during a recent interview with The Marquee. “The energy is really fucking horrible and how could you not absorb that. No matter how pure your heart is, no matter how great or good a person you are, how can you not be affected by that?”

Morris, a founding member of Black Flag who went on to form Circle Jerks and OFF! is mired in that toxic energy, and he continually throws heaps of other fuel on the fire. He waxes disgruntled about a huge range of topics with a seamless flow from one subject to the next, at times seeming rather conspiratorial, but almost always with an overflowing tool box of sharp observation and intelligent wit. He talks about living in a police state and America’s self-appointed role of the world’s police force with as much disdain as he does the people who park illegally on his block each weekend on their way to the local movie theater; and he rants about the “pricks and prickerinas” who profit from the parking fines, too.

“All of this fuels my anger,” he said. “What am I going to do — move to North Dakota, meet a girl with a pickup truck and learn to line dance? That’s not going to happen. I’m 61 years old. I’ve always just got by on the skin of my teeth. I’ve had some decent years on a financial level but for the most part it’s just part of the struggle to pay the bills and keep up with everybody and maybe earn enough money to go to Amoeba records and drop $100 on a bunch of music instead of drugs and alcohol and all of that fun stuff. To move from where I’m at? No.”

Morris has Type II, insulin dependent adult onset diabetes and the daily struggle to keep that in check — let alone the other health risks associated with it (particularly its link to stress) — to Morris anyway is an outline of the future and his ultimate demise. “I quit drinking. I quit smoking. I don’t do drugs. I try to eat a fairly decent diet, but I’m a weasely little Jew and my [glucosamine]numbers go all over the place and ultimately I just feel like that anger is going to lead to my ride out and it will have to do with some negative energy and negative thoughts. I don’t get to ride into the sunset along the coastline with the beautiful girl. I’m 61 years old. It’s time to start thinking about those things, but if I have the opportunity to go out and play music with some friends and make some noise and do some therapy on stage then hell yeah. I’m going to take advantage of it.”

Part of the pissing match was Ginn, who The Village Voice once called “universally despised,” saying something along the lines of Flag being a bunch of 60-year-old men running around pretending to be 16.

Despite not appreciating Ginn’s delivery, it’s not a statement that Morris necessarily denies or disagrees with. “It’s a challenge with the age we’re at to play these songs the way they’re supposed to be played — with the athleticism and the energy and the aggression and the anger. Some of these guys aren’t as angry as they used to be. I don’t know why. This world just keeps getting shittier and shittier. That said, [Flag] is a pretty fucking happening band. There are a lot of like younger bands that even at their best aren’t even going to be able to step up and do anything near what we do. And I don’t mean to be coming off like some egotistical, arrogant, stuck-up prick; it’s just fact. It’s just the way that it is,” Morris said.

Despite that claim however, Morris and his bandmates feel in some ways like they’re working on borrowed time. In addition to Morris’ health issues, a couple of the other guys have been through the ringer of heavy medical conditions as well. Stevenson was diagnosed with a benign, but very large brain tumor “the size of a grapefruit,” and while recovering from that passed a “Polish sausage-sized” clot through his heart and into his lung. Additionally, Cadena was diagnosed with a malignant tumor in his larynx in 2015.

“But for a few weeks we get to go out and blow off all of this steam,” Morris said. “We try to keep it as real as possible. We know each other we know what we’re capable of doing and what we’ve all been through. Playing this music, it’s kind of like therapy. It presents the opportunity to get a lot of this shit out of our system.”