Trending Stories from The Marquee
You are at:Home»Cover Story»Sam Beam & Jesca Hoop Go Beyond the Duet Single With a Full Album of Collaborations
By Marquee Magazine on June 1, 2016 Cover Story, Features, Interviews, Timothy Dwenger 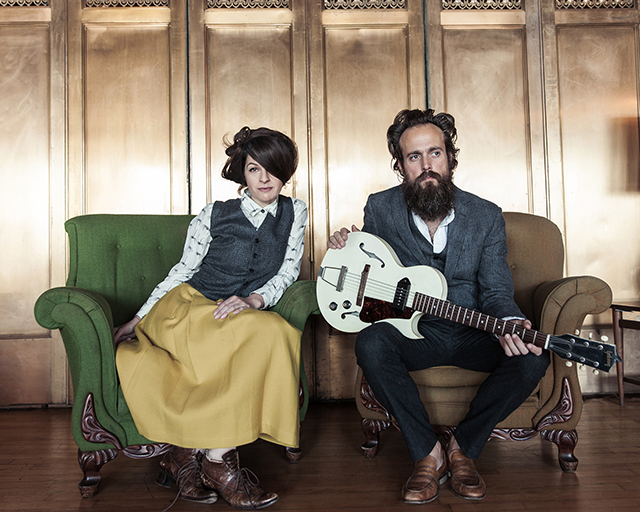 There is a long history of critically acclaimed artists coming together for a duet that shoots up the charts. As dated as they may now seem Kenny Rogers and Dolly Parton had “Islands in the Stream,” Linda Ronstadt and Aaron Neville dazzled fans with “Don’t Know Much,” and Joe Cocker and Jennifer Warnes stayed at number one for several weeks back in 1982 with “Up Where We Belong.” While not always one-offs, rarely do these sorts of collaborations yield a full-fledged album.

“I’d had this project in mind, in a loose sense, for a while,” Beam told The Marquee on a break from rehearsing with Hoop and the touring band in Chicago on the eve of their first show in support of the album. “I like those classic country and R&B duets; the kind of songs where each character has a voice and kind of expands the narrative a little bit. I thought it would be fun to find a writing partner and do my take on it with someone.”

Despite the fact that he has released five full-length albums and a handful of EPs as Iron & Wine, Beam has largely kept the song-writing to himself over the years. “I’ve never really co-written before so I thought that might be a fun thing to do,” he said. “I’d spoken to several people over the years and it never really caught the spark and then I discovered Jesca’s music. I guess it was about the time I was on tour for Ghost on Ghost. I was late, she had a lot of records and I had just kind of missed her music when it happened and I found a lot of things in her songwriting that I responded to.”

On the heels of that discovery, Beam picked up the phone and called Hoop to see if she wanted to come open some shows and test the waters a bit. As Beam was the first to admit, embarking on a project like this with someone is a big commitment and he wanted to be sure they clicked before he floated the idea of a duets album her way. “She was wonderful and we got a chance to sing a song for one of her records and after that it made sense and we both got excited about trying because we have similar timbres and our voices worked so well together,” Beam said.

One listen to the track that the pair recorded for Hoop’s 2014 album Undress, an acoustic reworking of her 2009 album Hunting My Dress, and it is immediately clear why they were so excited. The title track features Beam’s whisper sweet voice blended impeccably with Hoop’s angelic alto. Simply put, it’s mesmerizing and the pair would have been foolish not to pursue the idea of writing together.

While it’s easy to fantasize that these songs came to life during red wine fueled writing sessions around a farmhouse kitchen table in the wee hours of the morning, the reality is starkly different. “It was an interesting process,” said Beam. “She lives in Manchester, England, so obviously we weren’t sitting across the table from each other. We would send each other little melodies, or bits and pieces of phrases, and see what the other came up with. Things just seemed to fit together. We would do that a bit, send each other a lot of stuff, and then we would go on tour for a week or two and would work on putting those things together.”

In the end the experience was very fruitful to say the least. In addition to coming up with the thirteen very solid songs that make up Love Letters for Fire, Beam found comfort in having a writing partner. “It’s nice to have a partner to share the burden with,” he admitted. “I wasn’t fully responsible for polishing the thing and it shifted the goal from polishing it into something ‘correct’ in your mind to it being something surprising and fun, something that you didn’t imagine that you could do. Something that you couldn’t do without someone else’s input. It was funny, when I would get in a jam I would send her something and she would cross lines out and change things and I would have to react. It was through that process that these songs all got to where they eventually landed. It was more about enjoying the surprise than correctly pulling off what you set out to achieve.”

After thinking silently for a bit, Beam boiled his thoughts down and in doing so reinforced the message. “It’s shifting it from doing it right, to being open to making it something that you never would have imagined or done by yourself,” he said. “Something that you could only do as a team.”