Trending Stories from The Marquee
You are at:Home»Brian F. Johnson»Steve Kimock Enters His ‘Fourth Quarter’ With the Most Intimate Recording of His Career
By Marquee Magazine on June 1, 2016 Brian F. Johnson, Cover Story, Features, Interviews 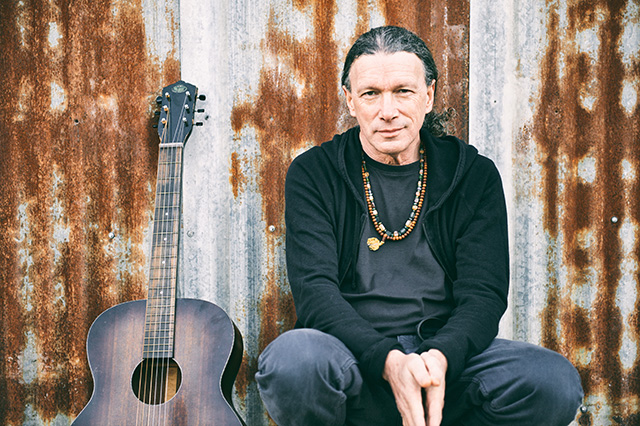 Steve Kimock knows how to do the big, soaring, solo guitar god work. For more than four decades the guitarist who co-founded Zero and has played in a whole gaggle of other bands, from Dead-related spin-offs to super groups, pulling figurative and literal musical wheelies and back-flips with the seasoned coolness of a professional stuntman. But knowing that part of Kimock’s guitar work is to know only a small fraction of the artist’s depth of knowledge and passion.

Kimock’s latest album Last Danger of Frost is an invitation into the artist’s late-night thoughts and late-night relationship with his guitars. “It’s personal,” Kimock said during a recent interview with The Marquee. “If you go see this show or that show when I’m playing, all you really get to see is that slightly over-the-top guitar thing which is fun, but there’s other stuff. All I really do is go out and do the lead guitar in a dance band, you know? But the featured soloist in a dance band thing doesn’t have anything to do with me just enjoying myself musically. You know I don’t come home after a gig and jam with a band. What I do is come home and sit with my lap guitar and play a little lullaby and try not to wake the kids up. And I do enough of that that it feels like who I am and I’d kind of cheat myself for not including it in what I do. You know, I’m 60 years old now and there’s no sense at this point pretending that this other aspect of my musical life isn’t part of my life.”

Having come to terms with that, Kimock, who has for decades bounced back and forth from the Lehigh Valley in Pennsylvania to the San Francisco Bay area, returned to his century old barn near Nazareth, Pa. to explore those sounds more thoroughly. As his publicist — famed Grateful Dead historian Dennis McNally — put it, the album started with Steve running his fingers over the strings and recording what came out. “He found out what the guitars had to say,” McNally reported.

“It’s not that simple,” Kimock said of McNally’s comments, with a bit of a chuckle, “but it’s not that far from reality, either. A lot of the stuff on the record and consequently a lot of the stuff that started — the seed and initiator of the post-album writing with the ensemble — began as tunings on multiple neck Fender steel guitars. I have a bunch of three and four neck Fender steels and when I take off my Clark Kent outfit or my Superman outfit, when I’m home I’m kind of a micro-intonationalist. I like tuning things and hearing different harmonies together. One easy way to do that as a guitar player is to take three or four eight-string necks and string them in tune to different scales and different chords and once you’ve gotten that far with it then you just kind of brush them and strum them and they make their own crazy sounds. You come out with interferences, and intonations happen between different frequencies and little melodies appear, and it kind of flutters around and it’s a really pretty thing. There’s a whole bunch of that lurking on the record and those kind of melodies were taken directly from those experiments.”

The totally solo, largely acoustic Last Danger of Frost is delicate and beautiful. Trippy and new agey in parts, sparse and simple in others, the record’s ambient electronica showcases a side of Kimock that’s never been seen before, at least not in a proper release. Grateful Music’s Kevin Long said that the album “literally drips with brilliance.”

Whereas software like Pro Tools gives creators unlimited choices, Kimock likes to keep a narrower focus and did just that on Frost. “I tend to be an economy of materials guy. I won’t start with a whole bunch of stuff. I’ll start with just a little bit of stuff and go natural on it — go fractal on it. Iterations and reiterations — as above, so below and symmetry and all that stuff,” he said. “That’s my job to put all of the little funny pieces together to make a square. Once I get something going it’s a matter of trimming it and sculpting it,” he said.

Originally, the guitarist didn’t plan on releasing the work but through a series of opportunities Kimock has put together an ensemble that can balance the solo work and bridge the gap to the layered feel of the record. Joined by vocalist/pianist Leslie Mendelson, his own son John Morgan Kimock on drums, and his 30-year plus musical accomplice Bobby Vega, the group is the perfect match to the personal nature of the material. For his part Kimock said, “It’s just different enough and just fresh enough and the chemistry is good enough that we’re really enjoying it.”

Cool, Share this article: Twitter Facebook Google+ Pinterest LinkedIn Tumblr Email
Previous ArticleThe Lil’ Smokies Get Their Land Legs Back After Telluride Win Creates a Sea of Change
Next Article Gramatik Collaborates With Raekwon and Gets Set For Another Headlining Show at Red Rocks