Trending Stories from The Marquee
You are at:Home»Brian F. Johnson»The Lil’ Smokies Get Their Land Legs Back After Telluride Win Creates a Sea of Change
By Marquee Magazine on June 1, 2016 Brian F. Johnson, Features, Interviews 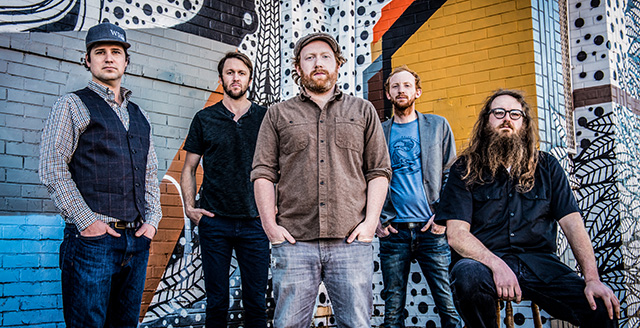 Andy Dunnigan had a tough time enjoying the 2015 Telluride Bluegrass Festival. It wasn’t that Dunnigan wasn’t enthralled by the line-up or by being in the hallowed terrain of Telluride, it’s just that there was an underlying feeling of trepidation surrounding him and his bandmates. “It was fun to be at the festival, but there was this cloud of anxiety over us the whole time — this great stress,” Dunnigan said during a recent interview with The Marquee.

Dunnigan and his band The Lil’ Smokies almost didn’t make it to Telluride last summer. The group, which puts forth a blend of traditional and progressive bluegrass and had previously taken home the band competition trophy from the Northwest String Summit, had entered the Telluride Band Competition for 2015 a little late and ended up on a waiting list. “It had gotten to the point where we had these dates blocked out but since we hadn’t heard back from Telluride we were getting ready to book some shows. You know, it was right in the middle of the busy season,” he said. But just as they were getting ready to sign off on some new shows they found out a slot had opened up and the quintet, which had started in 2009 in Missoula, Mont., would be making the pilgrimage to Telluride.

Upon arriving the group blasted through their preliminary round set at the Elks Park Stage, and had earned the nod for the finals, which take place on the main stage. “That was the icing on the cake as far as stress goes. We thought we played well, but there were a few things I thought I had messed up on. The whole band is made up of perfectionists, so we all had those thoughts. We didn’t walk off saying we’ve got that in the bag — it was probably the opposite of that,” Dunnigan explained. “And you know, they bring you out and they announce fifth place and so on, like a reality TV show, until there are just two bands. When they called our name it was shocking. It was a dream come true.”

The Lil’ Smokies’ victorious high didn’t last too long though, and in fact shortly after the applause died down, Dunnigan realized that as magnificent as the win was, it would also set the wheels in motion for a flurry of changes for the group. “I remember walking from the festival grounds back to our campsite and we were all really quiet. It was a heavy moment. We were at a crossroads for our group and for a couple of our guys it was really solidifying a decision while also making that decision tougher than it already was because we had established this brotherhood.”

Before they had ventured to Telluride guitarist Pete Barrett had announced that he wouldn’t be able to continue touring with the group, and fiddler Jesse Brown was on a similar page. “You know Pete had told us that even if we won he was still quitting the band, and I think in the back of my mind I was hoping that if we won it’d be harder for him to leave,” Dunnigan said.

But a win at Telluride comes with some expectations. A win at Telluride signifies it’s time to really hit the road, and to take the next step in furthering the band’s trajectory as a long-term solidified bluegrass act. “It set our dreams in motion,” Dunnigan said. “Winning Telluride for us was kind of a reaffirming, galvanizing moment that we weren’t delusional after all. We’re not the only ones who think we’re good.”

But for Barrett and Brown, the resulting spike in time away from home was too much. Barrett was eventually replaced by Matt Rieger on guitar, and Brown’s vacant fiddle spot was filled by Jake Simpson. The remaining band members include Scott Parker on upright bass, Matt Cornette on banjo and Cameron Wilson on mandolin.

Now, with their land legs back underneath them The Lil’ Smokies are in the thick of the resulting post-Telluride win whirlwind. They are currently working on a new album, which they are recording in Bozeman, Mont. The group has broken the sessions up into three segments and were midway through their second in mid-May. Plans are to return to Bozeman in July to finish the record, but as of now the release date is still very much up in the air. The group is also racking up frequent flyer miles, and putting some major clicks on the odometer. In addition to returning to Telluride this month as main stage performers, The Lil’ Smokies will hit a slew of other festivals this summer.

The Lil’ Smokies may have ended up on the summer festival circuit regardless of a Telluride Band Competition win, but what the win did was throw a good amount of gas onto an already well-burning fire.

“It set our dreams in motion, but at the same time it was scary. You have to embrace the absurdity of what this is, especially at this time and that’s kind of what being at the preliminary stages of a touring musician is. I think that’s where we lost a couple guys in the shuffle, but for us right now we really love it and those nights of fear and skepticism are fewer and further between. This is a whole new world and the possibilities are there,” Dunnigan said. “Change is a hard thing to swallow at certain times of your life but everything always changes and if you can accept that, the world is a really beautiful place.”