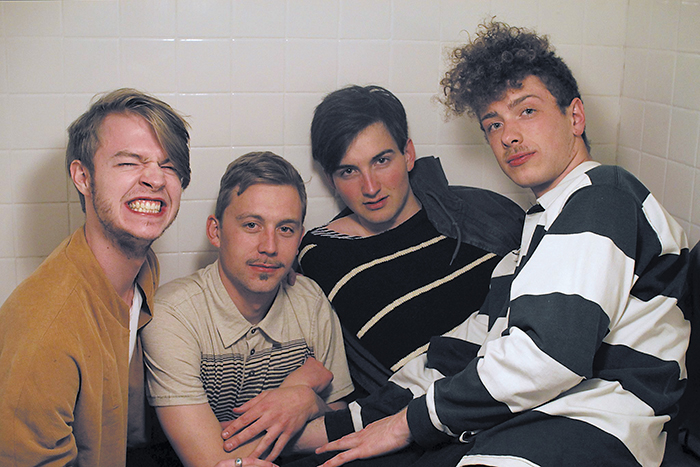 Beat Soft Pop, like many bands these days, started by exchanging musical memos across the country. “It was very hard to keep up,” said drummer Charlie Wilson in a recent interview with The Marquee. Wilson, who was still working in San Francisco during the project’s conception, to this day keeps his phone on silent because of the overwhelming onslaught of musical memos that the other band mates sent him. “Sometimes I’d get 18 new messages at once.”

After Wilson and the other members united in Colorado, they quickly decided to team up with Boulder-based label First Base Tapes and start playing house shows. At the label’s artist showcase in October of 2015, the band was noticed by Noah Simons of the Denver DIY staple Male Blonding. Simons approached them after their set and asked them if they wanted to record an album.

The band decided to record their debut in bassist Elijah Jarocki’s Boulder house — a house that looks like it was built in the early sixties and immediately abandoned. Original wood paneling still lines the main room that has a 25-foot tall ceiling, giving the space a natural reverb, a perfect setting for the indie/new wave/post punk sound of Beat Soft Pop.

The group set a recording date and time — midday on a Saturday in April — and they covered the windows with mattresses to dampen any sound leakage. “I checked with all the neighbors and posted around the neighborhood. Weeks in advance I was telling everybody what we were going to do it,” Jarocki said. On recording day, they got halfway through tracking the album when there was a knock at the door. Shockingly, despite the advanced notice to the neighbors, it was a police officer that had gotten a phone call from a neighbor regarding the noise.

The band was a mix of frustrated and disappointed with their neighborhood. “I busted a chair in half,” said Jarocki, “When I start something I like to finish it in the same breath. It was really upsetting to me. This town is full of people who say they believe in idealism or say they believe in art, but then they don’t realize that their money and their attitude about things is directly suppressing the thing they’re supposed to be supporting.”

Wilson, sharing in Elijah’s frustration, added, “It was a lot of energy wasted. I don’t take it personally. You never know. Maybe whoever called is bedridden with cancer. But it also could just be a dick. You never know.”

While they considered the possibilities guitarist Donato Ruscitti asked the obvious question about the police officer’s visit, “It’s crazy that [the neighbor]wouldn’t rather come talk to us.  We would work something out. They’re so authoritative to just go to the police rather than come talk.”

The call certainly made the group shift gears, but luckily they had some other locations to explore. The band decided to pack up and record the B-side of the album in the basement of CU’s Radio1190, where they had recently played on the local music show, The Local Shakedown. What resulted was a largely improvised flip-side to the album that clearly maintains ripples of frustration from the day.

As for the house used for the A-side, Beat Soft Pop’s debut album appears to be the last album recorded in that room. The building’s property manager recently called Jarocki to inform them of their plans with the building. “They wanted all of us to get out of here. I told them that we were all planning on staying. They said you’re not going to be able to stay here because the house is getting destroyed. Then she said, ‘Yeah, if you could tell your roommates that would be great,’ then hung up. We have no idea what they’re going to put in here. We don’t even know the history of this place, but you get senses of who lived here.” What is clear is that the house is of a different era in Boulder’s history. It’s design of a massive main room that would fit hundreds of guests is clearly no longer compatible with Boulder’s emphasis on short-term property value.

Beat Soft Pop is likely not the only band in Boulder faced with this dilemma. In a city with a dearth of venues that support local musicians, paired with skyrocketing rent costs, there’s a question as to how much the city values independent artists at this point. For now, the band is looking to Denver. “There’s just so many more bands per capita in Denver than Boulder as far as this whole scene,” said singer Jeff Thomassen trying to explain the differences in independent music culture between the cities. Ruscitti replied with, “This scene doesn’t exist in Boulder. We have to do it. We’re totally responsible for doing it ourselves if we want to do it here.”

As a result, like many other former Boulder bands, Beat Soft Pop will likely play far more often in Denver than their home base of Boulder, starting with the Denver Post’s Underground Music Showcase.