Trending Stories from The Marquee
You are at:Home»Cover Story»Dead & Company Carry on the Grateful Dead’s Legacy by Bringing Their Massive Tour to CU’s Folsom Field
By Marquee Magazine on July 1, 2016 Cover Story, Features, Interviews, Timothy Dwenger 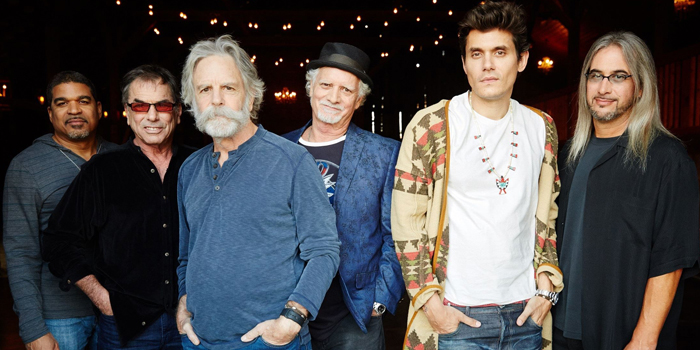 In January 2015 the internet exploded with news of a Grateful Dead reunion of sorts. The shows, dubbed “Fare Thee Well,” were billed as the last-ever shows for the “core four” – Bob Weir, Bill Kreutzmann, Mickey Hart, and Phil Lesh – of the original Grateful Dead. Tickets for the five shows were snapped up instantly as Deadheads old and young prepared to make an epic pilgrimage to Chicago’s Soldier Field to witness history.

As the excitement raged, a rumor began to swirl that Weir and the drummers were plotting a Fall tour with pop guitar slinger John Mayer. While many hardcore fans who had shelled out thousands for the “Fare Thee Well” shows cried foul and claimed they were being duped by a band just in it for the money, others saw it as a given that the music of the Grateful Dead, which has become part of the American culture, and the vibrant men who created it, could not simply fade off into the ether. There was bound to be a phoenix rising from the ashes of Fare Thee Well.

The fierce debates that followed last summer left the “final shows-ever” topic behind and focused squarely on John Mayer’s curious involvement in the project. Questions like “How can he fill Jerry’s shoes?” and “What does he have to do with jamband music,” bounced around alongside more inane queries like “Will setlists include ‘Your Body Is a Wonderland?’” or “Will Katy Perry sit in?”

But, when Dead & Company— featuring Weir, Hart, Kreutzmann, and Mayer alongside bassist Oteil Burbridge and keyboard player Jeff Chimenti — hit the road for the first time in the Fall of 2015 all speculation quickly dissipated as fans were won over by Mayer’s undeniable talent and singing abilities.

One of the fans who was won over by Mayer is self-described Deadhead Don Strasburg, the co-president and senior talent buyer for AEG Live Rocky Mountains, who has “well over 100 Dead shows” under his belt and who spearheaded the effort to bring Dead & Company to Folsom Field in Boulder over Fourth of July weekend this year. “I think that with John, Oteil and Jeff playing in the band they’ve brought in a certain spirit and life that’s clearly energized the music,” said Strasburg  during a recent interview with The Marquee. “John Mayer, has a voice that is as good a voice that anybody has brought to the Grateful Dead experience, and he brings his own unique interpretation, but it kind of reminds me of that smooth mid-’70s Jerry sound when Jerry’s voice was so good and pure. A lot of the super-heady ’70s purists think he’s hitting that tone. Obviously from a guitar standpoint, the dude is amazing so you are getting one of the best guitar players in the world who is working really hard to learn and do justice to the music.”

Strasburg went on to explain why he chose the more than 40,000 person capacity football stadium in Boulder, where The Dead celebrated their 15th anniversary, rather than the hallowed hills of Morrison where the capacity falls under 10,000. “The opportunity to go to Boulder with a band like the Grateful Dead seemed to be a really good fit,” he explained. “My job as a promoter is to really try to find the best template for the band and the community to enjoy what they do. If you find the right template then everybody has the best time possible; the band plays the best, the fans have the best time – they give the energy and enjoyment to the band – and then, as Jerry Garcia once said a long time ago, ‘you kind of have this serpent chasing the tail thing’ and it’s really fun. I really believe in Folsom. It’s big so you can get a ticket. I love Red Rocks but if we had put these at Red Rocks everyone would be complaining about how they couldn’t get a ticket, and people were coming in from all over the country, and you’d have to buy a scalper ticket for $500. I don’t think that’s right.”

Though Strasburg hasn’t had the opportunity to speak with Weir about the new band, Weir agreed with that assessment during a recent conference call with Mayer, The Marquee, and other national media outlets. “John is pretty accomplished at what he does. He’s put a lot of energy into becoming the musician he’s become and when he turns that around and puts it out on stage or in the studio or wherever, he’s a force to be reckoned with, and that’s a lot of fun. It’s a lot of fun for me to have a fire-breathing sidekick again,” Weir said.

Weir’s sentiments are echoed and reinforced by not only his energetic stage presence during recent shows but by the truly dynamic and fiery nature of the music that the sextet is cranking out. Gone are the days of languid, plodding versions of timeless rockers. This band is breathing new life into a legendary catalog and Mayer is a critical part of the formula. “Something really magical has happened, and John gets it,” Weir said. “If I can speak for him, he sees that unnamable holy grail out there of this quintessentially American musical form that can speak to all the idioms that feed it. And he appreciates it, and he’s going for it. That’s what we’ve always been going for. It was a no-brainer for me to hook up with him and chase this muse.”

Speaking to the “idioms that feed it” portion of Weir’s comment, Mayer drew a fascinating analogy. “There’s a certain way to be in the music where it’s almost like collecting baseball cards,” Mayer said. “You collect the Texas blues card. You collect the Chicago electric blues card. You collect the country-western card. And it’s sort of like this love of all these different little cards you can collect and keep in a little stack and walk around with in your back pocket. For me it was really about just getting another card or trading a card, you know? When musicians look at music that way, where it’s just sort of like this Rolodex of influences, it’s actually really great to have a conversation musically and it’s just a matter of rearranging the cards a little bit. When you have those building blocks of being able to be like, ‘Oh, do a Lightnin’ Hopkins thing here,’ or ‘do a Muddy Waters.’ Bob communicates that way. Musicians communicate that way. So when we go into ‘Smokestack Lightning’ or something, it’s almost like, ‘yeah, let’s do a Howlin’ Wolf thing, but let’s filter it through who we all are, through the six of us on stage.’”

It’s fitting that the primary examples that Mayer used in his analogy were blues based, as that’s the primary aspect of his playing that rings so true with so many Deadheads, who understand that a lot of what the Dead were doing was based in the blues and jazz. Weir explained, “When John plays blues, you can hear what subgenre he’s going for. He’s real well-versed in that idiom, but what that told me is that he’s basically a student and fan of American musical heritage. You could take that into whatever – various eras or pockets of rock and roll, or wherever you want to go in the American lexicon or legacy, and I could hear his appreciation of the various fields. That’s where our music comes from. The guys in the Grateful Dead grew up in an era in the Bay Area where you had everything that America had to offer on the radio. And we were all different guys, but we all had that same approach —most particularly Jerry and I. Pigpen, more or less, focused on blues, Phil focused on classical stuff, but we were all eclectic in our tastes, and when we came together, it caused sort of a conflagration of interest or excitement about what American music has to offer.”

Fortunately for Deadheads, the same excitement is clearly present in Dead & Company more than 50 years after The Grateful Dead originally formed. After Mayer and Weir initially jammed together on the set of The Late Late Show things took on a life of their own. “When we got in the room together with Billy and Mickey the idea just took hold of me,” revealed Mayer.  “It was as big and strong as any idea I’ve ever had in my life. I wasn’t sure how it was going to be received at all, but I knew that in the nucleus of it, that there was some authenticity. There was a lot of authenticity, but there was some validity, I think, to putting a band together and making music for people to want to listen to live, and hopefully want to record and listen back to for a while. So musically, it’s exactly what I was hoping it would be. I would say musically, it’s exactly what I thought it would be.”

It’s very reassuring that, at this point in their careers, musicians like Bob Weir and John Mayer are feeling so rejuvenated. Weir put it best when he said “regardless of what you see on stage, we’re basically a couple of 14 year olds looking at this immense palette of colors to paint with.”