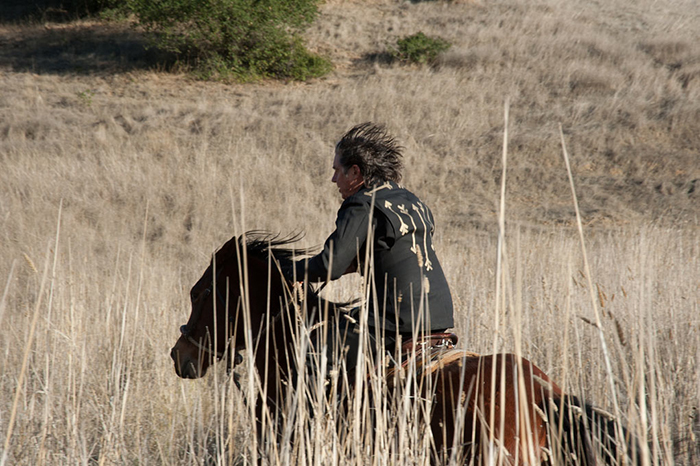 Just a few hours before John Doe headed into the recording studio for his latest album he said goodbye — for the last time — to his dear old friend who had been struggling with Alzheimer’s disease and Hodgkin’s lymphoma for quite a while. His friend, Michael Blake, the Academy award-winning author who penned Dances With Wolves, among other titles, had recently been moved to hospice, and while Doe knew the end was near, he didn’t know it would be coming quite so soon. Within hours of that final goodbye, while Doe was in a nearby studio in front of a microphone recording an album that would become an homage to his departed friend, Blake slipped away.

“Even though this record was dedicated to Michael it isn’t a sad record. It may have come from a sense of loss, but it was anything but a bummer. There was no bummer. I may have been emotionally raw or vulnerable because of it, but I wasn’t sad,” said the punk icon John Doe of the band X, during a recent interview with The Marquee.

Doe and Blake had been friends for three decades. It was Blake who taught Doe how to ride horses, and Doe said that the two taught each other about writing, music and art, as well. Doe realized that he could be near Blake during his final days, while also working with producer Howe Gelb in his Tucson studio to record Westerner, an album that is at times blatantly about Blake and at other times more subtly utilizes the author as a character.

“It was really an adventure,” Doe said. “Because, I didn’t know what it would be like to work with Howe. We’re pals and I like his music — I’ve been a big fan of his for the last ten to twelve years and the kind of work he’s done with Neko Case and Giant Sand; they would sound very different if it hadn’t been for him. But there was a great sense of striking out into the unknown. I took some of the musicians I play with in L.A. out to Tucson and we stayed in a trailer park kind of place. There was this great sense of having this adventure to make something from nothing.”

Westerner doesn’t give any overt nods to Doe’s days in X, other than the still-existing D.I.Y. ethos, which is leading Doe to release the record on his own imprint Cool Rock Records, with the distribution assistance of Thirty Tigers. The L.A. Times said that Westerner, “beautifully balances a rocker’s heart and a poet’s soul.” The Boston Globe said it was “the most striking music of his career,” and Salon said that the album comes off as a “quieter Doors with various psychedelic nuggets and a healthy amount of Americana folk.”

Ironically, the comparison to The Doors is fitting in more ways than one, as Westerner shares the same Shepard Fairey and Aaron Huey album artwork that was used for a Doors special Record Store Day release in 2014.

“I was looking through some Doors’ images,” Doe said. “I had already decided on the title Westerner and I saw this image, which was used by The Doors for a limited Record Store Day release or something — Ghost Dance. Anyway, I saw this image and I thought ‘Holy shit. This is just the image I should use for the Westerner because it’s got the space, it’s got the mountains and wild horses and those are things I’m very passionate about in addition to them being very important to what Michael cared about in his life.”

In addition to the art fitting the album’s theme so effortlessly, the image was also designed to support Native American rights via a campaign called Protect The Sacred. “The campaign is supposed to spread awareness, to let people know that there are still a lot of sacred sites that are under attack or in litigation to keep them from being built on; to becoming copper mines and stuff like that. And nowadays, since there are so many other issues going on, things like Native American rights and wild horses, nobody even thinks about them except for a very few people and if I can increase that by 10 people even or 100 people, that’s really something,” Doe said.

In addition to releasing the album, Doe has also wrapped up work on his new book “Under The Big Black Sun: A Personal History of L.A. Punk” which came out within days of the album. Doe had been encouraged by many people to write a book focusing on the punk scene in the Seventies, but had always stepped away from the project until he had an idea that really made the whole thing come to fruition.

So what Doe did, in conjunction with Tom DeSavia “and friends,” was gather together an assortment of stories — testimonies, if you will — from some of the other people who were there in the trenches with him in late-1970s. The book’s 24 chapters are written by Mike Watt of the Minutemen, Jane Wiedlin of The Go-Go’s, X’s Exene Cervenka and The Blasters’ Dave Alvin, among other contributors.

“I wanted context, and in oral histories there’s not a whole lot of fact-checking and people say, ‘I did this and you did that,’ and that’s all cool. When we started to really put it together I was shocked that everyone seemed to be telling a similar story — that they’re all a bunch of misfits that didn’t like the music that was going on, and I think that’s why punk rock happened all across the world. In like a year and a half it went form New York to London to L.A. It was just time.”