Trending Stories from The Marquee
You are at:Home»Features»Lake Street Dive: New album Side Pony
By Marquee Magazine on July 31, 2016 Features, Interviews, Timothy Dwenger 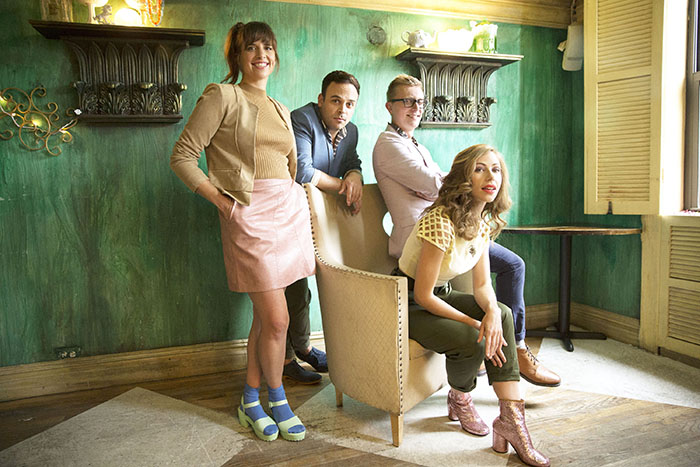 Lake Street Dive Latest album Side Pony was inspired by some unlikely modern albums, some of which don’t sound too modern

Deftly walking the lines that separate genres, Boston-formed Lake Street Dive have become universally adored as they have won over new fans from the stages of everything from intimate folk and bluegrass festivals to juggernauts like Bonnaroo and Outside Lands. Fronted by the smoky voiced Rachel Price, the quartet’s sunny melodies are as easily the soundtrack to a summer afternoon as their haunting trumpet lines are to a late night chill-out session. The way that they have juxtaposed jazzy chord structures with straight-up, hook-laden pop songs gives their music a timeless quality that owes as much to The Jackson Five as it does crooners like Bobby Darin.

Lake Street Dive’s most recent album, Side Pony, was produced by the Nashville-based, Grammy Award winner Dave Cobb who has made a name for himself in recent years by producing stellar records by the likes of Chris Stapleton, Jason Isbell, and Sturgill Simpson. While Cobb may not seem like an obvious choice for Lake Street Dive’s unique sound, drummer and vocalist Mike Calabrese explained what led them to track down the producer when The Marquee caught up with him as he enjoyed some July downtime in Boston.

“We decided who we wanted to work with when we heard the Sturgill Simpson album Metamodern Sounds in Country Music; it was stunning. It was one of the best modern records I’d heard in a while,” Calabrese said. “The first thing I noticed about it was that it had this ode to the past but also a modern flair to it. It was cohesive. It sounded great, and it had a lot of great arrangements. It had it all.”

As they digested Simpson’s album, and came to recognize Cobb’s contributions to it, their own record, Bad Self Portraits, was garnering attention and they were starting to outgrow their label, Signature Sounds Recordings. Though, as Calabrese put it, “Signature Sounds is the label that made us the band we are today.” But Lake Street had big goals and big projects in mind and needed the resources that a bigger label could offer.

With the blessing of, and help from, Signature Sounds owner Jim Olsen, the transition to Warner imprint Nonesuch Records was very organic, and as they started to think about recording the follow-up to Bad Self Portraits Dave Cobb’s name kept coming up. “We got on the phone with Dave and talked to him a little bit and he said a couple magic words like Motown, Beatles and I know you guys are a song band, and we were like ‘Yeah. He gets us,’” Calabrese remembered. “We could tell that he understood where we were coming from and because of the elements that he had infused into Sturgill’s music we thought it was a perfect fit.”

When they got into the studio with Cobb sparks started to fly in all kinds of directions. “We had a bunch of moments where everyone was in the studio high fiving. Like ‘Wow, I can’t believe we did that!’ But then there would be other days when we’d butt heads with him for hours. It was kinda the full catastrophe,” Calabrese said. “The experience had every high, and every low, that a creative process can have and I think that’s a really great thing. You have to take those points of struggle with as much respect as you do the moments of triumph because they all feed into the energy of the record. If we had gone in there and everything was easy and everyone always agreed about everything then I don’t know what that album would sound like but I don’t think it would be as exciting.”

There is no doubt that Side Pony is exciting. From the pulsating opening notes of the album’s lead track “Godawful Things” through the tender ballad “So Long” and the sample based old-school funk of “Can’t Stop,” the album takes the listener on a wild ride that is a true testament to the work the band put into it, the confidence they have in themselves, and the confidence they had in Cobb.

“We were playing a lot of those songs on the road, and had been for a while, so we had our own arrangements of them that we felt like were good arrangements and we’d bring them in and play them for Dave and he’d be like ‘Change this. Make the drum part double-time, and let’s add a hooky bass part, and maybe let’s do this bridge.’ He would throw a bunch of different things at us and we would work up what he said and it would all of a sudden be a new song for us. It would be a new arrangement, there would be a new feeling to it, and he would go ‘O.K., cut it.’ We’d run it through three times and he’d be like ‘O.K., you’re done.’ We’d be like ‘huh?’ The song we’d been playing for a year was all of a sudden changed in front of our eyes and we tried it three times and he was like ‘There you go, you’re done.’ That was it, he wanted to capture in any way he could, a freshness. So a lot of the basic tracks were recorded in two or three takes and he wasn’t looking for perfection, he wasn’t looking for execution. Nothing had to be beautifully perfect and methodical. He was looking for an energy, an overall energy. And I think he got it.”