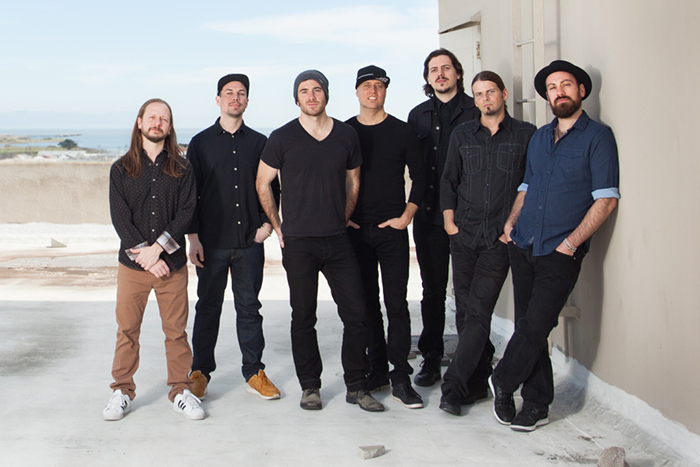 In retrospect, drummer Dave Watts now very clearly sees the writing that was on the wall. But back when his band The Motet was first recording their latest album Totem, which comes out this month, things seemed only slightly odd, not obvious.

The group had just come off a series of shows around New Orleans Jazz & Heritage Festival (aka Jazz Fest) in 2015, and had gone immediately into the New Orleans studio The Parlor with Soulive’s Eric Krasno for a five-day stretch of 12-hour days which would result in a good chunk of the new album. “We pretty much got everything down except the horns and the vocals,” Watts explained during a recent interview over sushi with The Marquee. “We mostly had the arrangements together, which was a little odd because we didn’t have the vocals completely together. It worked out in our favor, but I think, looking back, that it was part and parcel with Jans’ [Ingber] sort of moving away from the creative process with us, and moving away from really having his heart and soul in the music. I think that was one of the first signs that Jans was sort of not feeling it — the beginning of the feeling of disconnect and not in the music, just the ability to put in the time and energy.”

In December it was announced that Ingber, who had served as The Motet’s frontman for a half-dozen years, would be parting ways with the group. In a statement he released with the announcement Ingber said that the “plain truth is that my desire for a balanced life of creating music and being a father, a husband, an outdoorsman, and a conduit of positive change in my community, has outweighed my desire to be a full-time touring musician in an ascending band.”

Watts, who founded the band in the late nineties had been through line-up changes before, but losing the lead singer, especially one who had been with the band during a significant growth period was a daunting realization. While they had discussed some possible part-time solutions with Ingber, ultimately it was decided that finishing the shows that they had on the books and then tearing off the Band-Aid so-to-speak would be the best way to go. “We announced it right away,” he said. “We decided that we wanted to make the change happen quickly; that we had this record to finish and we wanted the new guy on it.”

Despite that leap though, Watts said there was a sleepless night or two when he realized that the search was on. “Trust me, I was sweating it,” he said. “It had to be right on all of these different levels. It wasn’t like just replacing an instrumentalist. It wasn’t just part of a section; it was the frontman. He had to be on the same page as us. He had to make things ‘us,’ as well as being someone we could also just hang out with.”

Watts’ sleepless nights didn’t last too long. In fact, as far as finding a needle in a haystack, The Motet did so with deft precision. Watts explained that Motet keyboardist Joey Porter spoke with their friends in the Brooklyn funk band Turkuaz, who recommended a guy whose resume was already top notch. Lyle Divinsky, a native of Portland, Maine, had earned two high profile awards for his soul singing, and reached #4 on the U.K. soul charts with his own music.

“He had a name for himself already and we were just lucky enough to cross paths,” Watts said. “His stuff was a bit of a different bag, a little more down-tempo R&B-ish, but we started trading tracks back and forth and really liked the fit more than anything we had heard.”

But the real solidifying moment for Watts was when Divinsky was given the reigns to play with one track that The Motet had kicking around. “We had this one track that wasn’t going anywhere,” Watts explained. “We had recorded it three years earlier but it had no vocals and the guys didn’t think it made sense as an instrumental tune. We were ready to throw it out. So, I sent it to him and gave him total freedom. Within three days he sent me everything recorded, lyrics written, the harmonies, the bridge, right to the exact arrangement we had, which was totally random and it was just like ‘insert-here.’ We found our guy. Before we even played a note together we knew Lyle was going to be our dude.”

After a few live shows together the band sent Divinsky back to The Parlor in New Orleans, where he sat down with producer Eric Krasno of Soulive and Lettuce to finish what the band had started the previous spring.

The final result is the anagrammatic album Totem, which finds the band in an ultra-collaborative era, working closely with one another over 12 tracks. Despite the recent personnel changes, the album is a full-on continuation of the band’s infectiously danceable funky sound. Totem serves as the soundtrack to the on-going dance party of the group.

But beyond the record Watts said that it’s what the album itself stands for — the ongoing legacy of the band that he started more than a decade and a half ago.

“It’s more of a hustle than ever because we have seven guys who all really want to make it work, and to me that doesn’t just mean filling up the calendar with a bunch of dates,” Watts explained. “I think that’s the worst thing a band can do; filling up everything with touring. To a certain degree, back in the day it was the only option to get your music out. But now the music can precede you at no cost, so it makes it more important than ever to make good music. It’s not just about being in people’s faces all the time — plus, it’s really hard to make good music when you’re on the road 200 days a year. We want to continue to make great records and write great songs and we can only do that if we give ourselves the time and space to do it.”