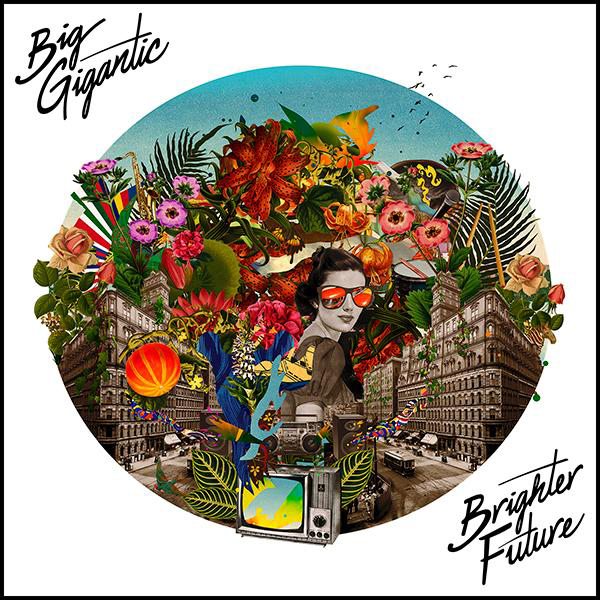 As Big Gigantic approaches its fifth annual Red Rocks dance party Rowdytown V, the livetronica duo has just dropped a serious left-turn that takes the fun-focused EDM sound that they were born with and elevates the musicianship and style to another realm that they have only hinted at until now.

Whereas previous Big G releases and remixes have seen the duo more than dabble with lyric-based tracks, Brighter Future full-on embraces a slew of collaborators that puts not just the album but Big Gigantic itself in genres it was never designed to go in, and it does so effortlessly. Brighter Future can, and maybe should be filed under hip-hop just as easily as it fits into Big G’s traditional EDM categorization, but doing so would also negate the pop and funk influences that are all over the album.

Brighter Future starts with the insanely funky “Odyssey Pt. 1” which features a bouncy, sliding bass line emphasizing a fairly obvious EDM theme. But just past the one-minute mark, right when a classic big drop is expected, the track abruptly stops, and switches to a vignette of jangling keys and a voice saying “let’s go.” The next 20 seconds are the ambient noise of a car rolling away — almost as if it’s driving away from Big G’s previous sound, because the very next track “The Little Things” (featuring Angela McCluskey) takes off into a mélange of pop, dance music, old-school funk and hip-hop.

And so it goes for Brighter Future producer, sax, keys and laptop slayer Dominic Lalli, and perma-man-bun drummer Jeremy Salken who continually hit a funk-laden version of Big G’s dance soundtracks with a massive cast of supporting artists adding vocals.

Big Gigantic doesn’t really need to drop names, but it’s pretty unavoidable when their cups runneth over with so much star-power.

Pell lays down the rhymes of “Miss Primetime,” while Griz almost cheerleads the vibe of “C’mon.” “All of Me” (featuring Logic and Rozes) gets downright syrupy, before Jennifer Hartswick brings the tempo back up on “Got The Love.” “Highly Possible” features Waka Flocka Flame and is as hip-hop as anything that Big G has ever done, including their 2013 remix of Jay-Z’s “Can I Getta.” Hartswick returns for the soul-driven funk of “I’ve Gotta Know,” before Natalie Cressman throws down a decidedly poppy flavor on “No Apologies.”

“Bring The Funk Back” is one of the only tracks without a featured vocalist, but the track isn’t without lyrics as the title is repeated in various synthesized orations. Cherub provides vocals over the disco beat of “Wide Open” and Naaz is the final guest vocalist on the album’s optimistic dreamy title track. “These words vaulted themselves into my mind one day in a moment when I was feeling like I was unsure of myself, unsure of what exactly I was doing with my life and unsure about humanity and the volatile state of the world we live in today,” Lalli told This Song Is Sick about the track. He continued, “As human beings, we all have low points in our lives where we question everything and are truly shown how shocking and just plain difficult the world can be. But at the same time, our high times wouldn’t be as extraordinary without the low times giving us a grand perspective on our lives and the world around us.”

To that effect, Big Gigantic has recently created “A Big Gigantic Difference Foundation,” which donates a portion of each ticket sold to local charities in each city they play.