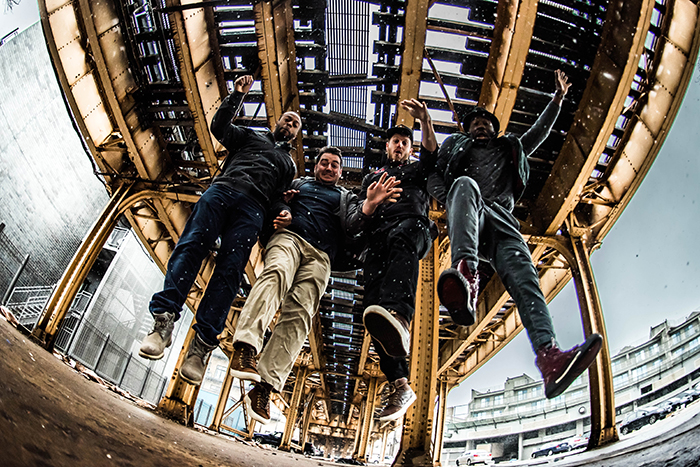 Ripping pages from the playbooks of jazz greats like Miles and Coltrane, and legendary prog acts like Tool and King Crimson, Oyster Bay New York’s TAUK has exploded onto the scene over the last couple of years as they have broken down walls, bent genres, and electrified audiences across the country with their jaw dropping live performances and stunning studio records.

While TAUK just recently appeared on the radar of many music fans, Alric “A.C.” Carter explained to The Marquee during a recent interview from the Resonance Music and Arts Festival in Ohio, that it’s been a long road.  “We were officially TAUK our freshman year in highschool, so I guess that was around 2003, but the band was much different then, we had different members who aren’t in the band currently and we had a couple of different formations,” he said. “We started as a high school band so things change and people grow, but the three of us stuck with it and we met Isaac [Teel] shortly after college and it all linked up and that’s the formation that we’ve been rocking with since.”

While on-stage it’s Teel’s commanding presence behind the drumkit that seems to dominate the room, the music that explodes from the P.A. is unmistakably one spawned by a group of like minded musicians with years of experience honing a sound that blends elements of funk, jazz, progressive rock and even hip-hop into a unique sonic gumbo that challenges and excites.

When they went into the studio to record their newest record, Sir Nebula, Carter and his bandmates decided they wanted to push things a bit and break out of their comfort zone to deliver an album with a slightly different sonic palette than they had worked with in the past. “On this record there are elements of more ambient music,” Carter said.  “For me, personally, I wanted to try something a little different; I wanted to play with sonic textures and I wanted this record to breathe a little bit differently. I think we definitely took a lot more risks and that’s something that we strive to do both live and on our studio albums. I think there are elements of this record that are a little bit more prog than we’ve showcased in the past and I think that has a lot to do with our live show experience and trying to convey what that experience is like on a record.”

While TAUK has been labeled as a “jamband” due to the exploratory nature of their live performances, Carter was quick to point out that though “jam” is not so much genre as it is a scene, improvisation is critical to what TAUK is in the live setting. “There are some songs that vary in terms of how specifically they are written out: some songs are through-composed so there are no sections where they can open up, but there are a bunch of other songs where the entire back half of the composition is open to interpretation and interplay so we definitely try to keep those as loose as we can to incorporate elements of improv,” he revealed.  “It’s a very important part of what we try to do. To change the material not only for ourselves as the players and composers, but for the fans and listeners too.”

To Carter and the rest of TAUK that relationship between the audience and the band is a truly dynamic one.  “It’s not up to us what song is popular or what people like, it’s a two way street and you have to work with your listener,” he said. “It’s an interesting dance, and one where you want to make sure you maintain artistic integrity. The music is a representation of who we are and a statement that we try to make so we have to make sure that we are as consistent and as clear as we can be.”

The man that helps TAUK maintain that clarity and consistency in the studio is multiple Grammy award winner Robert Carranza who hosts the band at his Solar Powered Plastic Plant Studios in California. “We’ve known Robert for a while now. I think we might have sent him a link to a song off a Myspace page that we had which is kind of funny when you think about technology today.  He heard something in us, and liked it. Robert has worked with many different artists ranging from Jack Johnson to The Mars Volta and that fact alone to me displays diversity in being able to approach many different styles of music and be successful with all of them. It’s an honor that he respects what we do and there is a certain trust that we have built with him in terms of developing our sound,” Carter said before waxing a little philosophical about Carranza’s studio which is located at Jack Johnson’s Brushfire records. “It’s kinda hard to describe ‘vibe’ you know? Some things give you a good ‘vibe’ and some things give you a bad ‘vibe.’ It’s something that is completely subjective but something that can be collectively understood. I think that’s what we have for that space over at Brushfire.  It feels like home, you come home and you relax and you breathe differently, you eat differently, you are not as worried about certain things because you are comfortable. And that’s the best way I can describe it. It’s comfortable at Robert’s place and we feel that we can be at our best there.”