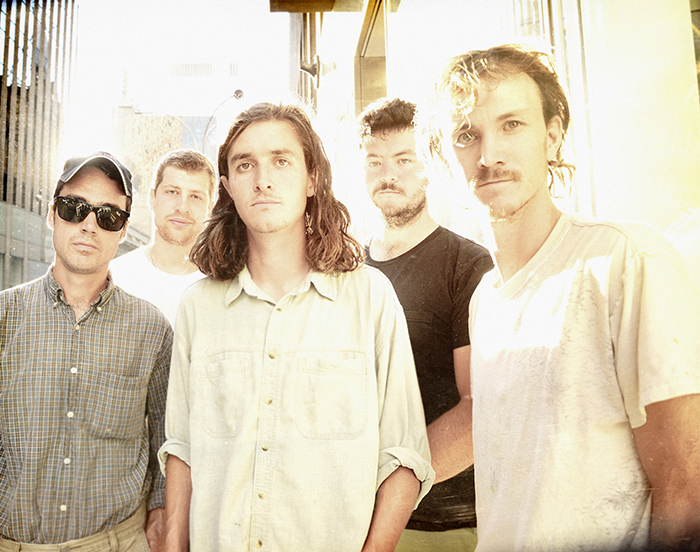 In the past few years, folk-inclined bands stomping across America’s stages with acoustic instruments and shout-along choruses have been nearly inescapable, almost to the point of parody.

Then there’s The Felice Brothers. For a decade this band has traveled America’s backroads, their songs shining a light on our darkest underbellies with rough hewn artfulness and their exhilarating live shows kicking aside hip posturing in favor of genuine catharsis.

“I’m not an overtly political person publically,” James Felice, keyboardist, accordion player and vocalist thoughtfully reflected. “None of us are. Our ideas are expressed through the music. But I think our role is to express things from our side, which is working class America. That’s what we know. We grew up in a rural part of the world, so we relate and sympathize with that reality. We’re more of a folk band, and folk music traditionally focuses on the poor and the middle class of America. That’s always what our music has been focused on, for the most part. That is what we would like to continue to write about because I think that is what this country is built on.”

The Felice Brothers are made up of brothers James and principle songwriter, vocalist and guitarist Ian Felice, alongside longtime friends Greg Farley on fiddle, Josh “Christmas Clapton” Rawson on bass and David Estabrook on drums. All members grew up in the Hudson Valley of New York State, where the Catskills frame a scene of pastoral majesty and relative silence only two hours north of the vibrant metropolis of New York City. It’s an energetic convergence that makes the region, “A really special place in the world,” as James described it. “I’ve never lived anywhere else in my life, so I don’t know how we would be different if we came from somewhere else. But all of us love where we are from. We’re proud of it. I know a lot of people don’t like where they are from, like if they grew up in the suburbs or shitty towns. I feel bad for them because we love where we came from. We’re stuck here. We’re going to be here for the rest of our lives, probably.”

There is also a rich folk music tradition in the Hudson Valley, most notably from Pete Seeger, as well as others from the Greenwich Village scene who settled in the area. This legacy of storytelling that gives voice to both the struggles and dreams of the working class carries through in The Felice Brothers. Ian Felice is a superb songwriter, and the band’s latest release Life in the Dark (2016, Yep Roc Records) certainly highlights that. Weaving contemporary discontent with our corporate-saturated culture (“Aerosol Ball”), the insanity of greed (“Plunder”) and the desire to jump on a motorbike and escape it all (“Triumph ’73”), the songs feel at once classically familiar and fervidly contemporary.

The band recorded the album over a six week period this spring in an old mechanic’s garage on a chicken farm with James serving as engineer. If that sounds a bit quaint, it’s important to note that the close proximity to the band’s homes and families was a deciding factor. “A lot of times when you make a record you live in the studio, you play all night long and you are completely isolated and cut off from your life,” James recounted. “That’s an amazing way to make music. But this way was much more homey. You could go home for lunch if you wanted to. It was a job, but one we all really enjoyed doing.”

Before the sessions, the band spent about a week clearing out rusty tools and jars full of bolts and screws from the cinder block garage, acoustically treating the space for the Life in the Dark sessions. With the exception of 2014’s  Favorite Waitress, the band’s albums have all taken this DIY approach.

“We fell in love with the process of doing it on our own, of being alone, just us and our close friends,” James reflected. “Without having to punch a clock, we could play as late or as early as we wanted. We had complete control and freedom. I think that’s really important for us. We don’t like having people looking over our shoulders and we don’t like having to answer to anybody, ever. In this day and age, it’s cool to record music in a great studio with great equipment and have an awesome engineer. That does make a difference. But you can also do it yourself and it’s almost as good, as long as you know a little bit about what you’re doing. And you can save a lot of money, which is important for a band at our level.”

Getting to work with close friends and family has worked out well for The Felice Brothers over the years. They know what drives each other up the wall, and what cheers each other up through the rough patches. The band makes a point to eat breakfast together every day on tour. They’ve developed a synergy that they don’t take for granted. As James told it, “We’re so lucky in that respect. So many good bands have failed because people didn’t get along.”

The band’s live shows are a joyous experience, with an attention-getting approach that is informed by their early days busking in the subways of New York City. “We weren’t the band we became until we had to earn people’s attention and put on a good show,” James mused. “Because if people are walking by, they’ve got better things to do with their lives than to stop and listen to you. If you can compel those people, even for a minute, that’s not easy to do in the subway. Everything we’ve been doing since then has been a refinement or adjustment on the main energy we developed down there.”

After a decade of work, The Felice Brothers may not be a household name, but they have been able to make this band their lives, and garner an enthusiastic fan base along the way. They don’t take it for granted. “When we first started, I remember expecting it just had to happen,” James said. “We worked really hard at it and we became successful in our own way. So I never sat down and thought, ‘Wow, what an amazing and unlikely thing to have happened to us.’ But now, after 10 years, I recognize how incredibly fortunate we are. I have learned to be really grateful life worked out the way it did.”