Trending Stories from The Marquee
You are at:Home»Album Reviews»Faceman ‘Wild and Hunting’
By Marquee Magazine on November 1, 2016 Album Reviews, Brian F. Johnson 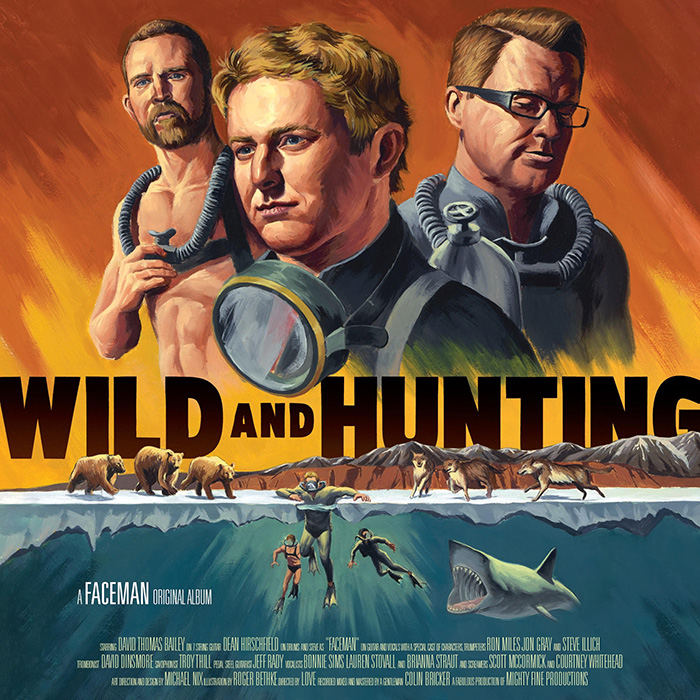 Almost two years in the making, FaceMan’s fourth album Wild and Hunting is the trio’s most beautiful, personal, triumphant and riveting work of their career.

FaceMan (the person) has always towed the line of being a community organizer as much as he is an elusive recluse. Frontman guitarist/vocalist Steve, who is joined in the trio by seven-string guitar wizard David Thomas Bailey and drum-freak Dean Hirschfield, has done everything from hiding behind masks, sticking to his first-name only moniker, building elaborate stage art that deflects attention from him, and unlike most artists, he turns almost every opportunity he’s had to shine the spotlight on himself around to highlight friends and fellow Denver musicians.

But on the newest album Wild and Hunting, FaceMan has opened up a depth of feelings and emotions that are as personal as reading a private diary. Starting with the horn-heavy “FatherTime” FaceMan opens up like a patient on a shrink’s couch, singing “Just like the clouds, I’m stuck here in Cleveland, no search party calls out my name/Just like that kid that still laughs within me, I want to be happy without reason.”

On the title track he delivers the line “Strong be stronger, I want to be my father,” and follows that with the jubilant “life is the party” sing-along glee of “Yes.”

But it’s on track four, “HeavyHeart,” that FaceMan delivers a multitude of feels. More than hinting at his previous life he sings “I’m on the road, staying out of my head, lucky I’m not dead/I had to go, I had to save my soul, cross the bombed out bridge, down a bombed out road/I miss my home but the wind still reminds me that the smell of the blood is better off behind me. I’m better off alive, with a heavy heart; heavy, heavy heart.” It’s bitter-sweet and when the group reaches the climactic final chorus, it comes with redemptive, triumphant tears.

As they’ve also done with previous release parties, FaceMan won’t accept hogging the stage all to themselves. When they unveil the album they will do so at a grand, two-day celebration that they’ve put together alongside an astounding 100 bands billed as “Faceman’s 100 Year Storm.” Not surprisingly they’re also working to create another elaborate stage design with the help of Justin Hicks and Katie Webster of the Denver production company Incite.

It’s an incredible gift to present such personal material in such a connective way, and even more so to share it with and allow the input of so many other individuals.