Trending Stories from The Marquee
You are at:Home»Brian F. Johnson»In the Whale, Five Years in, Their New ‘Quicksand’ EP Goes Deep With Themes About Trappings and Suffocation
By Marquee Magazine on November 1, 2016 Brian F. Johnson, Cover Story, Features, Interviews 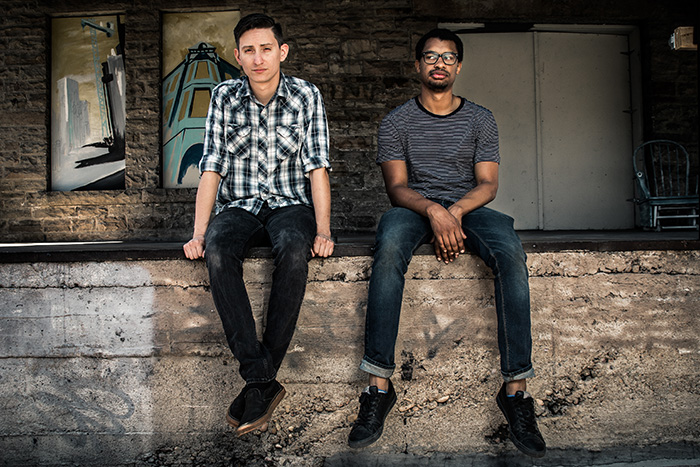 In The Whale’s Nate Valdez has one of the wimpiest police records in all of rock and roll. Most Sunday morning choir directors are harder thugs than Valdez, whose list of violations include a cracked windshield, obstructed view (cause by an air freshener) and of course the catch-all, following too closely.

The thing is that Valdez has only been given warnings for all of this bad-assery. He’s never actually been cited, but that hasn’t kept countless law enforcement officers all over the country from stopping the band’s tour van over and over and over again.

“It’s an average of one or two times a tour and each tour is usually a month. We’ve probably been pulled over five times this year,” he said. “It’s got to be the Colorado plates. People see a big black van and with our front license plate you can see us coming for miles. It’s like, ‘Oh look at that big green thing on a big black thing. They must be moving weed.’”

Drummer Eric Riley said that the astounding number of times they’ve sat roadside with a cop in their window is pretty out of control and highlights the paranoia of police that everyone from Colorado is rocking the ganja. “I’m sorry, but I have a hard time believing that we would have been pulled over for a cracked windshield if our plates didn’t say ‘Colorado’ on them,” Riley said. “But put yourself in a cops’ position: What are you going to do? Obviously you’re going to try to find a way to pull us over to see if we have weed.”

But time and time again In The Whale has done nothing but waste the time of state troopers. “We don’t smoke,” Valdez laughed. “We’re like the squarest dudes.”

The continual scrutiny is just part of the job now for the Denver-duo; something they need to go through to play a gig, like load-in or sound-check. For half a decade now the group, which was originally formed in Greeley, has been touring heavily — more than 120 live dates last year, alone. It’s a grueling schedule, and all that time on the road and the inevitable potholes that come with it keep the men constantly on their toes. “We’re always worried about the van breaking down or something shitty happening,” said Valdez. “It a never-ending head on a swivel, looking for what’s coming next and I think that’s what kind of drives artists and musicians as a whole.”

That angst can be felt in all of In The Whale’s five EPs, but it’s on their latest album Quicksand where it’s the most apparent; as if the nagging itch they’ve been able to mostly ignore is getting worse and worse. From the title, to the heavier themes of some of the songs, it appears as if the band has spent all of those days on the road looking out the windshield of their van at a country mired in its own trappings.

In a press release that accompanied the new EP Valdez said that the material was an attempt at putting meaning to the feelings of being “crushed, suffocated and occasionally out of control of the things around you.”

When he spoke with The Marquee he elaborated, explaining, “No matter where you go, no matter where you turn, you can’t figure out what’s propaganda and what’s not. What’s reality and what’s not? People are telling you to lose 10 pounds on this diet pill and if you wear this underwear you won’t ever smell again. It’s like — I don’t know — a bunch of stuff is being shoved down your throat,” he said.

The band doesn’t claim to have the answers as to how to navigate any of that, but rather offers Quicksand as a means of acknowledgement and at least momentary escape from it all. “I don’t know that the album really presents any kind of a solution,” Riley said. “It just sort of acknowledges that we’re all in the quicksand, more or less. A few years back I used to be very ideological. I was very confident that there was a right or a wrong thing to do in a lot of situations and I think the older I get the more I realize that everything and everyone is flawed and you’re never going to get it right all of the time. And that’s not good or bad, it’s just what it is and the that’s the world, you know. We’re all just human beings floating through this earth.”

Clocking in at 14 minutes, Quicksand is one of their longest releases, and Valdez said that the band’s hit-it and quit-it nature of records may continue for some time as their album strategy is tailored to support today’s short attention spans. “Our idea is to put out an EP every year, sometimes twice a year, just to keep people interested and up to date on what’s going on. I feel like people’s attention spans are really the reason why we’re doing this — because people have a fickle nature,” he laughed. “People turn over so quickly and forget that ‘Oh yeah, there’s this band,’ and ‘Oh, yeah I guess I have their shirt.’ That’s so weird! It’s like, that was three months ago.”

In The Whale will give their tour van a much needed break this winter. The band will stay close to home in December and January so that they can write new material and recuperate both mentally and physically. Then in February they’ll begin burning the candle at both ends again when they set off on their first European tour. Since he started In The Whale Valdez said it’s been a goal to play music abroad and even if he does have to log a bunch of miles behind the wheel in Europe, at least he won’t be doing so with Colorado plates.