Trending Stories from The Marquee
You are at:Home»Cover Story»Nahko and Medicine for the People interweaves music with protest and action on latest tour
By Marquee Magazine on November 30, 2016 Cover Story, Features, Interviews, Timothy Dwenger 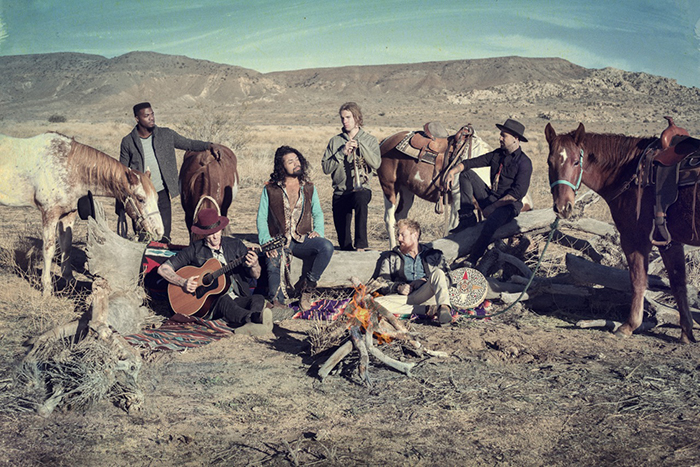 There’s no denying that 2016 has been a challenging year. From the countless legendary musicians who have passed, to the Syrian refugee crisis, and from senseless police violence and the Black Lives Matter movement to the election that shocked the world, these are trying times. But history has proven that times like these allow leaders with unique abilities to influence social and political change, to step forward. While there is no doubt that we have a long way to go, politicians like Bernie Sanders and Elizabeth Warren are fighting the good fight while artists like Lin-Manuel Miranda and Nahko Bear are standing up and using their art to motivate the masses.

“The despair that I think a lot of people feel comes from the fact that we are like ‘Oh my god, we’re gonna have to slip a bit backwards now with all the new installations in the White House and the fact that Trump is the only leader in the world that still denies climate change,” said Nahko Bear during a recent interview with The Marquee as he spent some time on his organic farm in Hilo, Hawaii during a break from touring with his band Medicine for the People. “The wound of our world is wide open right now. We are getting to see all the pain.  It’s horrible. I listen to the news every day and I tap into what’s happening and I think ‘Wow, this is the worst we’ve seen it in my 30 years of being on the planet.’ But shit, there are other countries that suffer dictatorships and suicide bombers and other kinds of oppression every day.  Even the Philippine president is killing anyone who is on drugs or has drugs on them or is a drug dealer. We don’t have it that bad.”

While he is not denying that it does seem bad, Nahko is calling on people to do something about it rather than just sit back and complain from behind phone and computer screens. Nahko dubbed his current tour “A Call To Action” and his band’s most recent album Hoka, loosely translated, means “Let’s Go!” He is working hard to motivate his fanbase and, by extension, a whole generation.

“Like any generation we want to move the old out of the position of politics and move the young in because the way that it should work is that the old guard, in their wisdom, shares their experience with the young and turns over the reins to them when it’s time. That’s the tribal way,” Nahko explained. “The call to action really does focus on social empowerment. How to empower people to find their role in society, stand up for equality, and then really ask them to envision the kind of world that they would like to live in.”

To do this, Nahko has tried to incorporate an element of social and political awareness into his concerts and has even gone so far as to break from the “typical” format of what most people think of as a concert. “This is the first tour we’ve done for the record and I brought one of my longtime activist friends on board with me and he acted as an emcee and we created a different kind of show that was more dialogue based. We still played a lot of songs, because I didn’t want to create a set that was all talking obviously, but I thought it was really powerful and a lot of the feedback we got was supportive,” he explained. “In fact, when we played in Arizona we had this middle section of the set that spoke on police brutality because I feel that it is really important for our audience, who is 50 percent or more white, to be able to have a safe dialogue about white privilege and to talk about police brutality and the imbalance of how black folks in our country are targeted by police. We did all that within eight minutes and then we went into another song.”

Nahko went on to reassure fans that his message is peaceful. “It’s not like a Rage Against the Machine or NWA concert where you are like ‘Fuck the police’ all the time and almost get arrested or beat up at the show,” he said. “That’s not what we are trying to do. We want to create a safe container for clear dialogue about social issues and obviously come from the heart and lead from the heart.”

Another movement that has been close to Nahko’s heart recently has been the fight against the Dakota Access Pipeline at Standing Rock. While the protests have taken on a prominent role in the public consciousness in recent months, Nahko understands that the work is only just beginning. “We have huge support since September from all walks of life, but the powers that be are still turning their backs. It’s a big messy situation. Everyone is like ‘This is bad. This is really bad,’ but what’s the bigger issue here? The bigger issue here is the shit-tons of money that are getting pumped through this pipeline. There is tons of money crisscrossing this country and it’s not just a snap of the fingers to say ‘O.K. let’s switch over to renewables,’” he admitted. “That isn’t gonna happen and that’s not what we are asking. We are saying that these pipelines are faulty. No one’s even talking about how bad that pipeline explosion in Alabama was three weeks ago.  That’s still leaking! Tons of people are losing their water and someone died. Is that not enough of a reason for the powers that be to say enough is enough?”

Not one to only rally people from the stage of his own concerts, Nahko jumped at an opportunity in September to travel up to Standing Rock, hold the line with the faithful, and practice what he preaches. Since his visit the tide has turned a bit, and the movement has become something of a social phenomenon that may be distracting from the original mission and vision of the protests. “My experience out there was deep and right now I feel like there are a lot of people out there — and I totally get it that people are fed up and tired of it and just want to fight — but that’s why we are seeing so many more injuries. You remember action that took place recently where they sprayed the water cannons at everybody? I was getting feedback from a lot of folks and a lot of people are saying that was an unnecessary action that was not planned in accordance with what the elders were asking and a lot of people just went and took the bridge and now we have a lot of injuries. It’s getting really messy, there are a lot of people showing up to camp now that have felt the call because it’s a big social movement now but it’s a really difficult situation because there are not a lot of people showing protocol because we’ve lost that and I think in a deeper way that the prayer has been put on the back burner,” he said. “When you hold the prayer in a good way, you follow that advice of Gandhi – non-violent doesn’t mean non-confrontational – we are confronting it but we have to be wise about how we confront it. Our enemy is very, very wise and intelligent and they are looking at us as a bunch of flies they need to bat away. We’re not. We all have the right to protest and the right to peacefully protest and that’s what we’ve been doing and yet we are getting shot and maced and blasted with water cannons. It’s intense, the U.N. has called for a cease to the building, and the Feds were actually asking to halt construction until further investigation and yet they are still building. Who is holding them accountable?”

While there seems to be very little accountability in place to stop the Dakota Access Pipeline at this point, the awareness that the fight over this, the Keystone XL pipeline, and other similar projects has brought to the masses is incredibly valuable. That said, it will only remain valuable if people remain vigilant and act on their will to affect change. For his part, Nahko is not backing down and will continue to remain on the front lines. “Music is a powerful tool for creating political and social change but it’s complicated, it’s completely a challenging task. We are having to face these social issues much differently than our grandparents or parents had to face them in the ’60s. I feel like we are carrying that torch in some fashion from Peter, Paul and Mary days when music and activism was hand-in-hand with social movements,” he said. “I always think it’s really funny though, because sometimes we get this crowd that is like ‘Stick to music Nahko’ and I’m like ‘Well I am, that’s what I do. My music’s always been political because life is freakin’ political.”