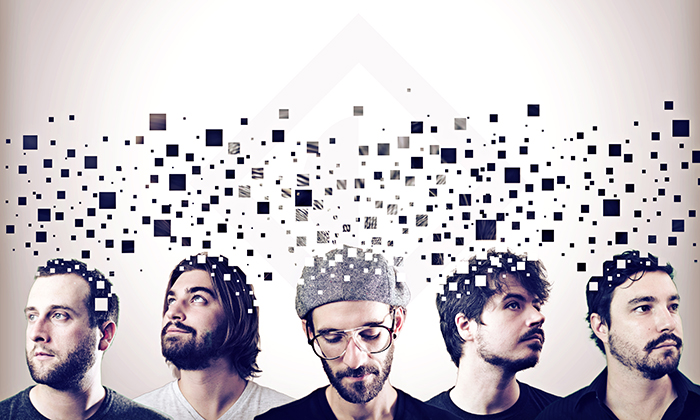 It’s understandable to look at our present state of affairs and want to grieve and panic, but upheaval has consistently been a part of the human story. Running alongside this chaos have always been artists responding, creating and clearing space for the new to emerge. Billy Brouse reflected on this on a phone call with The Marquee, from Asheville, North Carolina, where he and the other members of Papadosio live. Despite the forest fires raging outside Asheville and the emotional surge in the air post-Presidential election, Brouse sounded steady.

“Right now, it’s a turbulent time, but it’s always been turbulent,” Brouse said. “If you go back to any point in time where we have a coherent historical record, people are freaking out. I think the role of an artist is to grasp that and be able to address the situation, while also rising above it. It’s like, I see this crazy hangnail, but I’m not going to pick at it and make it worse. Maybe, instead, there’s a way to make people more comfortable. To show that yes, this is happening, but you can find a way to be with your fellow human beings in this time.”

Sam Brouse, who joined his brother and bandmate on the phone, framed it as a balancing act. “You have this dichotomic relationship between being an active artist who is trying to say something about a situation, or trying to create an escape for people,” he said. “Finding the balance between that is really hard.”

Papadosio —  Mike Healy (drums), Anthony Thogmartin (guitar, keys, vocals); Rob Connell (bass, vocals); Billy Brouse (keys, vocals) and Sam Brouse (keys, vocals) — does not shy away from this challenge. Swimming in the rangey waters of the livetronica scene, with elements of reins-off jazz, alternative rock gruff and finely tuned soundscapes, their music is both furiously danceable and a deep dive, exploring reaches far beyond the dancefloor. Celebrating a decade together, 2016 has seen the band hit some notable highwater marks — such as their first headlining spot at Red Rocks — and they released a new EP this fall, the all-instrumental Pattern Integrities.

Pattern was crafted out of recordings the members worked on individually. Unlike the full-band sessions for previous releases, such as last year’s lyrically-driven Extras in a Movie, each member brought songs and ideas to the table separately, handing their recordings off to the others for input. Thogmartin then put the tracks together for the band’s final mix down. “He just hunkers down in his basement for like a week,” Billy described.

Papadosio has always embraced the freedom of DIY recording, but this individualized approach also helped them worry less about each other’s reactions — and their own inner critics. “If you are around a bunch of people, even your best friends, you don’t want to put something out there that you feel unsure about,” Billy said. “You get worried about the immediate judgement. But with this approach, we could let an idea sit and marinate for a little bit and let everybody else add their own spices.”

This was evident during the discussion of the track “Mister Turtle’s Cloud Kingdom.” Written by Sam, it made it to the record without any major changes. This provided a moment of hesitation for the younger Brouse. “I was too stubborn to change much on it,” he paused. “Which was kind of lame now that I —”

This type of supportive coexistence is a helpful communication model. “Our relationships with each other can serve as a micro-picture of everyone else’s relationships on a bigger, societal level,” Sam considered. “We’re all very different people, but we keep on getting along and keep learning lessons together as we try to create and move this project forward.”

In that spirit, Papadosio will return to Denver in December for Earth Night. The original Earth Night has its roots in Sam Brouse’s pre-Papadosio college days at Skidmore College in upstate New York, when he became friends with fellow undergrad Jason Takahashi. Takahashi’s interest in political science, social movements and indigenous philosophy culminated in the first Earth Night, his 2009 senior thesis. “I wanted to flip the script on Earth Day,” Colorado native Takahashi recalled, on the phone from his home in Denver. “I wanted to make something more inclined towards nightlife. Connecting with the spirit of the planet and its overall goal and agenda for us doesn’t have to be just during the day.” Part research presentation, part fundraiser, this first Earth Night also featured a soundtrack from Brouse’s brother’s band, up-and-comers Papadosio. Takahashi’s artistic career has remained tied to the band since, from passing out burned CDs at Pretty Lights shows to spending four years on the road producing the band’s stage visuals.

Although he’s taken a step back from touring, Takahashi still works closely with the band as the creative director for Earth Night events, which have been held in other cities. This December will be its second year in the Mile High City. Drawing together art and music with nonprofit service, the event is, “A little nexus point where we try to bring all the best things we can do together,” Takahashi described. “It’s also about honoring our friends, family and community who are doing awesome work.”

This year’s Denver Earth Night events will kick off Friday, December 9 with a Frequency and Flow Yoga class (featuring live music by Thogmartin), and then a live PA set by the band at Cervantes’ — their first live PA set in Colorado. There will also be a daytime service project on Saturday December 10, teaming up Advocates of Change (Share Your Cloud) with A Little Something (The Denver Refugee Women’s Craft Initiative) at The Mango House. This all leads up to the Papadosio’s headlining Fillmore show Saturday night, which also brings friends Conscious Alliance on board.

“I think the whole thing that’s going on out there in Colorado is really inspiring and very empowering,” Sam said, describing why Earth Night is a great fit for Colorado. “It seems like Colorado is not taking any shit from anybody. They are getting done what they need to get done, because there’s this thriving community of relatively like-minded people. It’s a really inspiring atmosphere for artists to play in, and a really good place for Earth Night too, because it creates a great platform to address the collective issues we see across the nation and the world.”