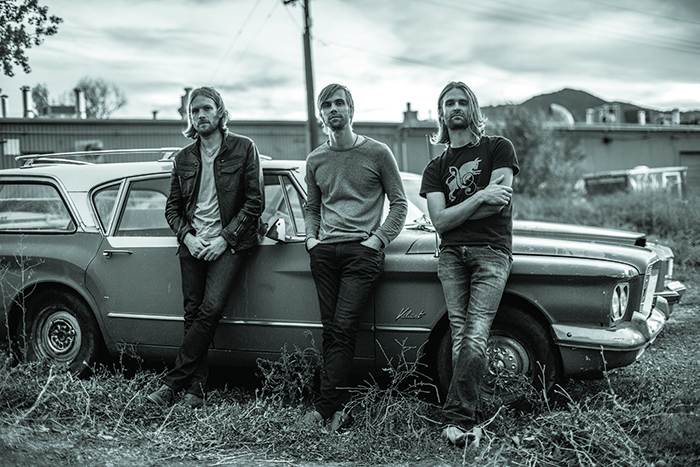 In the early 2000s, at the height of the jam band and bluegrass bubble in Boulder, the vintage rock trio Rose Hill Drive emerged, seemingly out of nowhere.

The antithesis of almost everything in the Boulder music scene, the group, made up of brothers Jacob and Daniel Sproul and childhood friend Nate Barnes, was punchy, raw and loud. Rose Hill Drive garnered massive early attention from audiences and industry big wigs, drew comparisons to and opened tours for some of rock and roll’s greatest acts and relentlessly toured the continent and beyond.

They were on the road for almost five straight years up until 2009, when after starting the year opening for Jane’s Addiction, they put the brakes on hard and took a 17-month hiatus. Rose Hill Drive came back in 2011 as a four-piece, released their album Americana that summer and toured with Stone Temple Pilots. But by the first week of 2012, the band had logged its final show.

The incredible rise of Rose Hill Drive had come back down to earth, where it sat smoldering, exhausted and seemingly left for dead, except for a few files in a folder on a computer desktop. “There’s that folder that you never get rid of on your desktop and one of those was ‘RHD 2014,’” explained bassist/vocalist Jake Sproul during a recent interview with The Marquee. “We had these demos that Daniel and I made like two years ago that were still floating around on our desktops. When we saw each other we would talk about how there was a really good song in there.”

But that conversation took a few years to actually come out. Following their final show the Sproul boys went separate ways for a while. Jake went down the rabbit hole of electronic music personally, and professionally focused on writing commercial music for high profile clients like Starbucks and The Colorado Lottery, among others. Daniel on the other hand took supporting guitar roles most notably with Americana badass Ryan Bingham, who would also later be joined in his band by Barnes on drums.

Jake recalled that when Daniel announced his plans to join Bingham on the road, that it felt like a final nail in the Rose Hill Drive coffin. “For most of 2014 and all of 2015 I was like ‘Rose Hill is done,’” Jake said. “It hit me hard when Daniel said he was going on tour with Bingham. That hit me real hard. He was like, ‘We can still do this,’ and I was like, ‘Nope! No we can’t. You’re going to be really busy. You basically are doing something really great for yourself, which I’ve come to accept is wonderful for him, but it really fucked me over and it was hard for me. I was like, ‘Fuck you guys. I’m done.’ I was bummed. I was really upset. I was angry. I had so much hope and the record [Moon] was almost done and I was like ‘Yeah, let’s do this again’ and then Daniel and Nate went on the road with Ryan.”

Daniel, on the other hand, said that the feeling of needing some distance was palpable and that had they not pulled the plug then, they might not be here today looking to resurrect it at all. “It needed that break and it needed that time to develop anonymity between everybody,” Daniel said. “After we did those STP tours and we were really excited about Americana —we put it out really fast so that we’d have something for those tours — but once it was done and we got back everybody was like ‘meh.’ Like, ‘Do you want to do this anymore?’ It was too tired. We beat it into the ground for years and years — I think in some questionable ways, too. We could have spent some time focusing on other stuff, but we were on the road so much and it killed it. It was a rut in a way. We had to break that. And in the moment that’s really fucking tough to do because the machine you talk about, it is all around, and the only way that was possible was for us to all go our separate ways and get a fresh perspective and a new way of doing things.”

It took some time for the hurt to subside and for the brothers to re-open the conversation but when they did it came back to that still existing desktop folder and the demo tracks that were hiding within. Armed with the education Daniel had received in musical dynamics from playing with Bingham, as well as the production and composition skills Jake had learned writing commercials and experimenting with house music, the brothers Sproul headed back to their stomping grounds of Coupe Studios in Boulder and began to take a deeper look at the broad strokes they had sketched several years prior. The result is a body of work that has no expectations or limits to it. Currently, they’re looking at 12 songs for a possible album, but they don’t have any idea if that’s what they’ll eventually release. Furthermore, they have no hard plans to put anything out, no deals still lingering from before, and certainly no time frames.

“If when we get to it, only seven of these songs work, then maybe we’ll release that. If it’s all 12, great. Knowing Jake and the way he’s writing there will be 12 more songs written before I’m finished mixing these,” Daniel said while hunched over the mixing board at Coupe. “We’ve always tried to capture what we do live and I feel like we never have before on a recording. I feel like this finally has that energy and we’ve finally figured out how to capture that and I’m really pumped about that.”

Jake said separately, “Daniel wants to get the record and be done and have it be a thing, but I’m just focused on writing and have no idea what else might happen. You know, I think we alienated some fans early on by trying to write stuff that was off-topic or too genre specific. Now, we’re kind of able to express ourselves in different ways and we’ve kind of seen how this band survives in the best possible way, which is rock and roll, straight-up. No Frills. Super straightforward, and through that cool things can come out.”

With no expectations and no timelines to consider, the brothers feel liberated, re-energized and excited about writing their next chapter, but seem to be approaching it with cautious optimism. Several times during the interview Daniel questioned rock’s relevance in today’s market, but also said that he’s willing to go back on the road nonstop if the new material catches fire. “I’d sell my fucking house,” he adamantly said. “I would be on the road nonstop if my family could come and we could make it as big as I have it in my head. That’s what I want to do and that’s what I love. I don’t look at it as a naive little boy anymore which is where the band started from. That dream that I had when I decided to make this my life when I was 16 and I left high school, it’s more alive than ever. And that’s what I’m embracing, I guess. And at the same time I feel like I’ve done it long enough that I feel like I have to tame expectations. It’s a gamble. You never know. But I’ve had this feeling that if we came back together it was going to be explosive.”