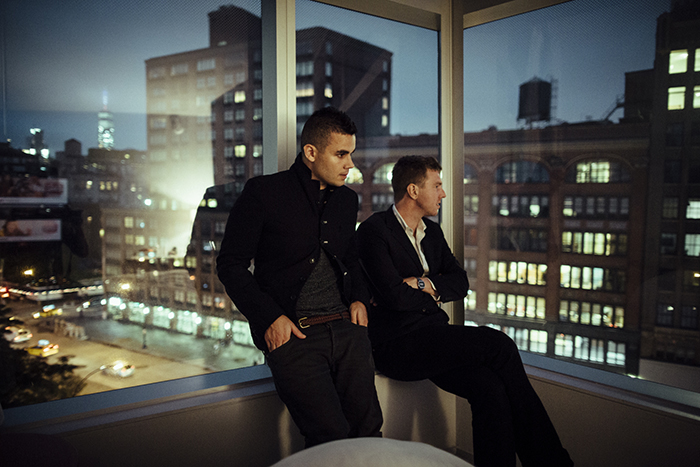 The Walkmen frontman, Hamilton Leithauser, collaborates to create a new supergroup and a new album

So called “super-groups” have always been a much heralded and anticipated phenomena in the music industry.  Magic was in the air back in the ’60s when Crosby, Stills, Nash & Young teamed up, and again in the ’70s with Bad Company, and even the ’80s and ’90s got in on the action with acts like The Traveling Wilburys and Temple of The Dog. What we are just now starting to see is the advent of “super-groups” born out of the indie-rock boom of aughts.

When Hamilton Leithauser of The Walkmen and Rostam Batmanglij of Vampire Weekend first met in 2008, a creative partnership wasn’t on their radar, but the explosively creative energy that they were able to tap into changed the plans. The bands of both rose to popularity from the thriving Brooklyn-centric indie rock scene of New York where brooding rock ballads brushed shoulders with jangly pop jams on a nightly basis and they have blended those styles and more on their wildly successful debut collaboration.

In late 2013, The Walkmen announced they were going on an indefinite hiatus with lead singer Hamilton Leithauser and other members of the band venturing out to pursue solo careers. Just months into The Walkmen’s break, Leithauser’s debut solo project Black Hours yielded very promising fruit. “I had been working on Black Hours for a long time before Rostam and I teamed up for two songs that provided a very unexpected twist right as I was finishing the album,” Leithauser said from his home in New York where he was enjoying some time with his two year old daughter, home from pre-school on Christmas vacation. “We wrote and recorded those very quickly and they ended up taking the record in a really unexpected direction. After the record came out we had a couple of things lying around — one of which was the song that became ‘1959’ on this record — that we hadn’t finished and it just felt like we didn’t even need to talk about it. It was just ‘Let’s get together and finish those songs!’ So we got together and we wrote five songs and then we got together again and we wrote another three songs and we decided we would do a full record together.”

The resulting project, I Had a Dream That You Were Mine, came together with uncanny ease for the two seasoned musicians. “I’ve been doing this for so many years and I’ve been in so many situations where you start playing and three hours later you don’t like anything — you don’t like the sound, you don’t like the song, anything,” Leithauser explained.  “With this it just sorta seemed like we’d try something and it would work and then we’d add something and either that would work, or if it didn’t work we would just drop it and go to something else and that would work. There were very few dead-ends. It felt like we had a positive energy where everything was just clicking nicely and that’s not to say it wasn’t a ton of hard work, because we did spend all day for many trips out to L.A. and down to D.C. and here in New York, too. It was a lot of work, and it took over two years, but it was the kind of work where every time we left the studio we felt like we had something. In my experience there are a lot of times where it doesn’t feel that way. You walk out of the studio and you feel like ‘Man, I could have done anything today. I could have gone and watched TV or I could read a book. I could have done absolutely anything else and it would have been more productive.’”

The productivity of the sessions was emphasized by the fact that Leithauser has a passion for writing and recording simultaneously and, as a result, left writing for the studio.  “With a few exceptions, when we walked into the room there was nothing written and we built every song together from the ground up,” he said. “We didn’t work on things outside of the studio and 90 percent of it was created right there in the studio.”

While the studio space itself ranged from makeshift set-ups in Batmanglij’s childhood bedroom at his parents’ house in D.C., to a home-studio in a back house on his property in Los Angeles, the duo was able to remain creatively focused and Leithauser admitted they were in love with the sound they were creating. “It’s always hard when you put out something that you love because you don’t have any idea if it’s going to, for some reason, be unfashionable or something like that,” he explained. “It’s just always really tough to gauge, but we both felt really confident and loved this project. It had that thing that I just wanted to hear it and that’s always a good sign that I think other people are going to like it, but you really never know.”

This is a fickle music world that surrounds us and while the next new thing could pop up tomorrow, there is always something about quality that cuts through the hype and offers select projects the right to have some success. The music of Leithauser and Batmanglij has that quality; it is current while still paying homage to influences ranging from Phil Spector’s “Wall of Sound” to the late great Leonard Cohen. It’s a very different and confident sound that this pair has created and though Batmanglij won’t be consistently joining him on the road this winter, Leithauser has put together an all-star band to bring the music to life on stage.

While it does seem a bit conspicuous that Batmanglij isn’t a full time member of the touring project, Leithauser addressed the issue very matter of factly. “To be honest, he and I have both been in bands for a long time now and we both really know how it works. His main interest right now is recording and I love recording and writing songs, but I also love playing live and while he loves playing too, I think that he really wants to spend his time in the studio.  Touring can be really stressful and I think if we want to continue to work together creatively then we need a break from each other also. We’re mature, we’ve been around.”